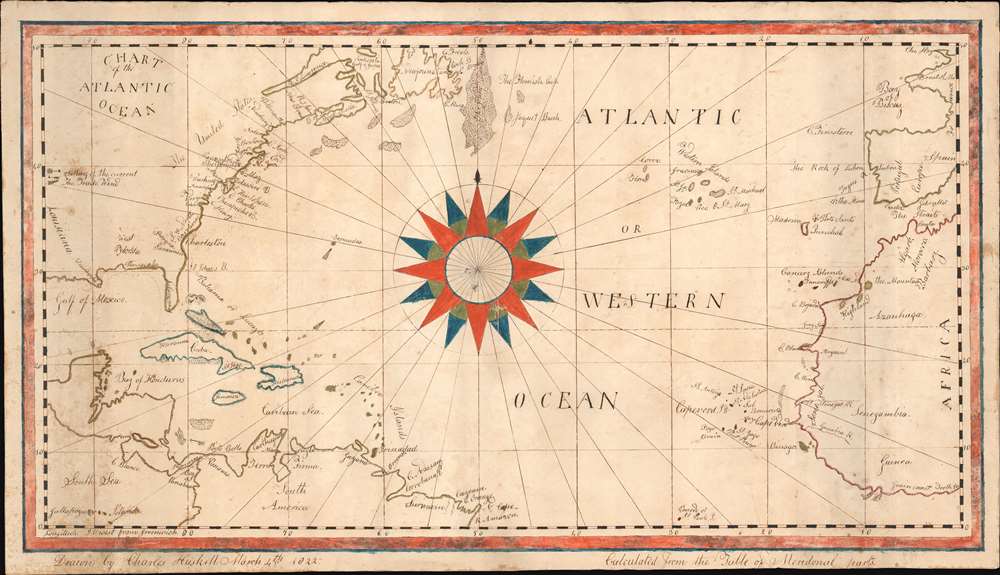 An exceptional and finely executed manuscript school-boy map illustrating the North Atlantic, here called the 'Western Ocean.' A striking compass rose dominates the center of the map. It was executed on March 4, 1822 by Charles Haskell (see below), when he must have been about 14. Despite being young, the map, which is based on Blunt's c. 1820 Chart of the Atlantic Ocean, is finely executed, covering from Louisiana to Gibraltar, incorporating most of the eastern United States, part of South America, and west Africa. As one would suspect of a scion of New England fishermen, the many cod fishing banks off the coast, and the Grand Banks, are illustrated with impressive meticulousness. Curiously, the map includes the Saint Peter and Saint Paul Archipelago, at bottom center, a remote atoll in the Atlantic - rarely visited save by occasional whalers. Haskell also notes prevailing wind and currents.

Given where we acquired the map (coastal Maine), and the probable age of the mapmaker in 1822, it is likely that the Charles Haskell in question was born in 1808 in Concord, Hampshire, the scion of a long and prolific line of New England seamen. He was the son of Jeremiah Haskell (1767 - 1844), a native of Newburyport, MA, himself the son of Nehemiah Haskell (1727 -1787), a Gloucester seaman. Charles Haskell died at sea in February of 1858, on a voyage to Somerset, England.

The use of mapmaking in teaching is first seen in Europe, mainly England. The Schoolgirl/boy Map became a peculiarly American pedagogical tool in the first part of the 19th Century. Such maps are remarkable for their fine execution, idiosyncratic lettering, and quaint flourishes. They most often illustrate the World, the United States, New England, or specific states. The present example, focusing on the North Atlantic, is most unusual and representative of the wide-ranging nautical character of coastal New England in the early 19th century - and our cartographer's specific family. Most are based on generally available reference maps, such as those found in the atlases produced by Carey and Lea, Finley, and Mitchell. The present map, being nautical in nature, is derived from the chartmaker Blunt. The goals of these exercises were more far-reaching than teaching geography. Students were encouraged to take pains in their draftsmanship, and often achieved beautiful flourishes of artistic expression - as with the compass rose here. But most peculiar to the American iterations of educational mapping was the goal of instilling a sense of civic pride and responsibility. Indeed, the key desired result of education in the post-Revolutionary-War United States was to prepare for the education of the next generation of American citizens, a patriotic duty. For a good overview, see Betty Mason's '19th Century Schoolgirls Were Incredibly Good at Drawing Maps.' Published July 27, 2016 by National Geographic.

This map was drawn on March 4th, 1822 by Charles Haskell. It is based upon a c. 1820 chart by Edmund March Blunt, also titled Chart of the Atlantic Ocean. As a manuscript, this map is one of a kind.

Very good. Some spotting and soiling.
Looking for a high-resolution scan of this?