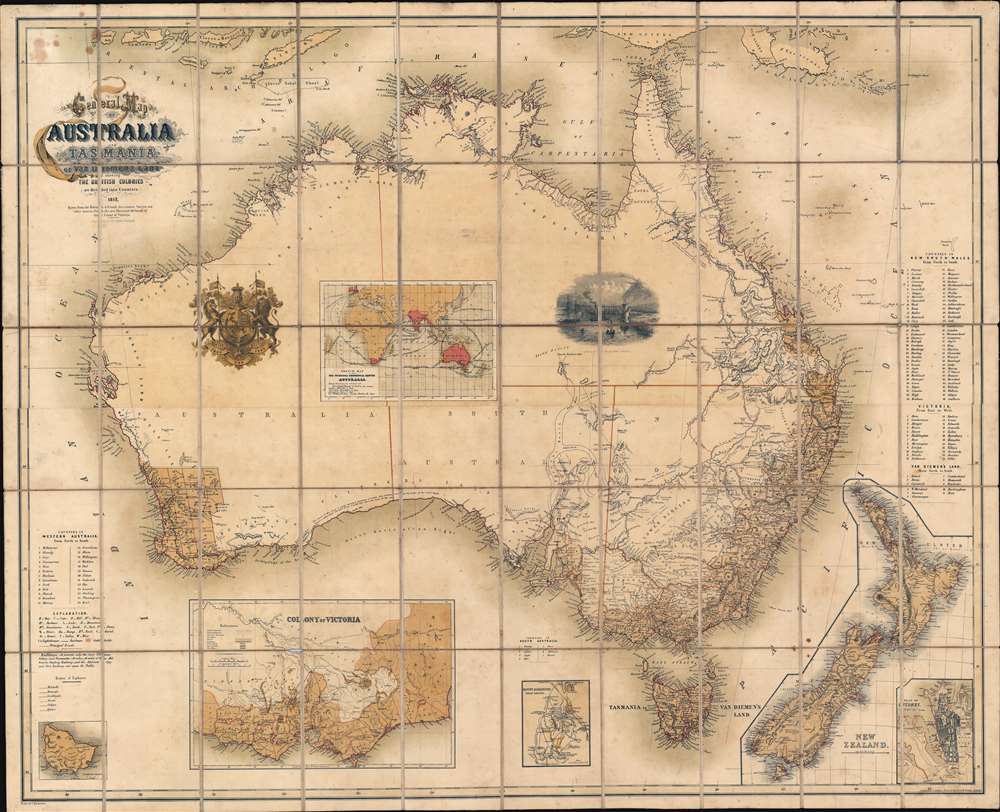 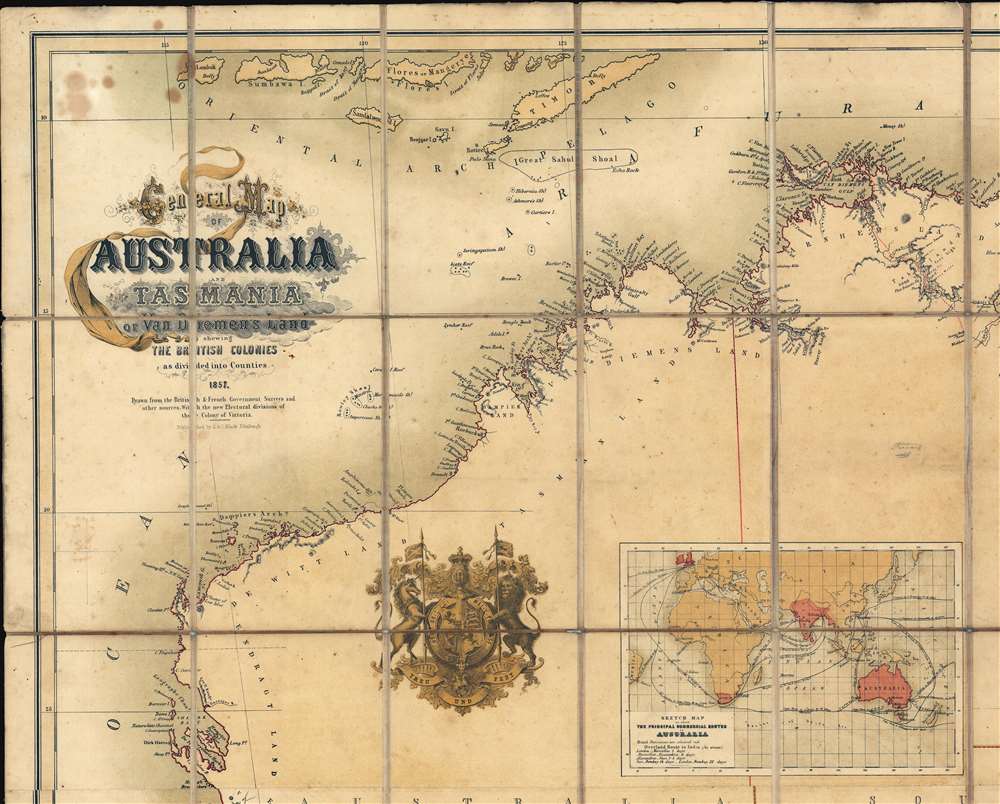 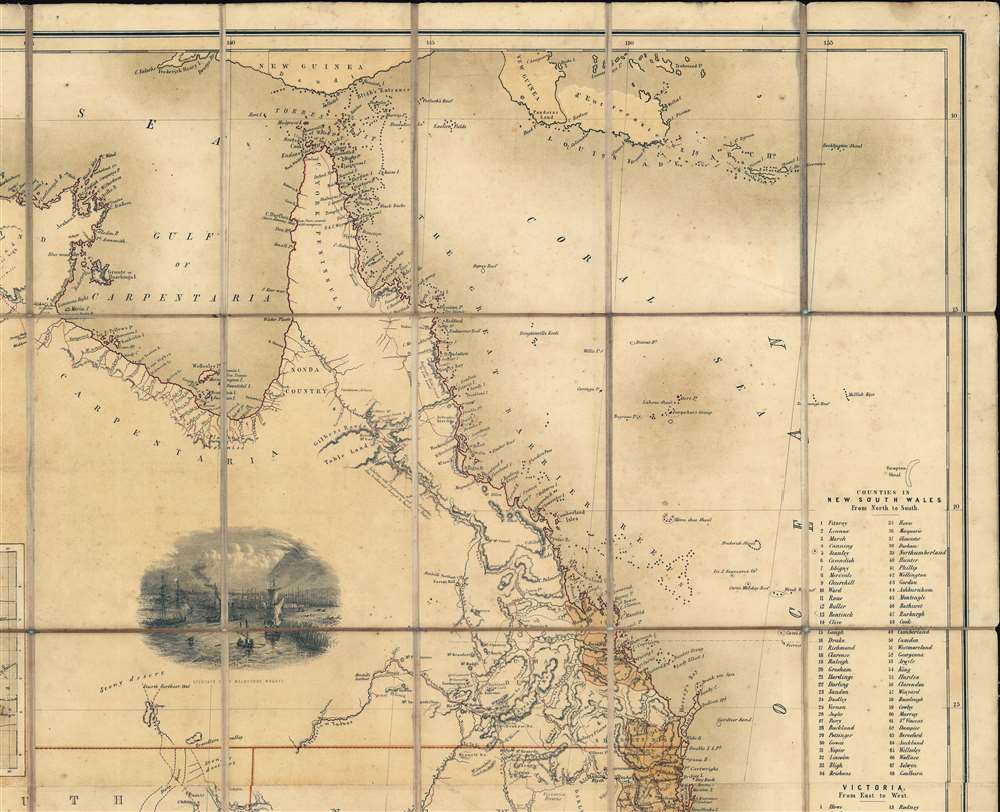 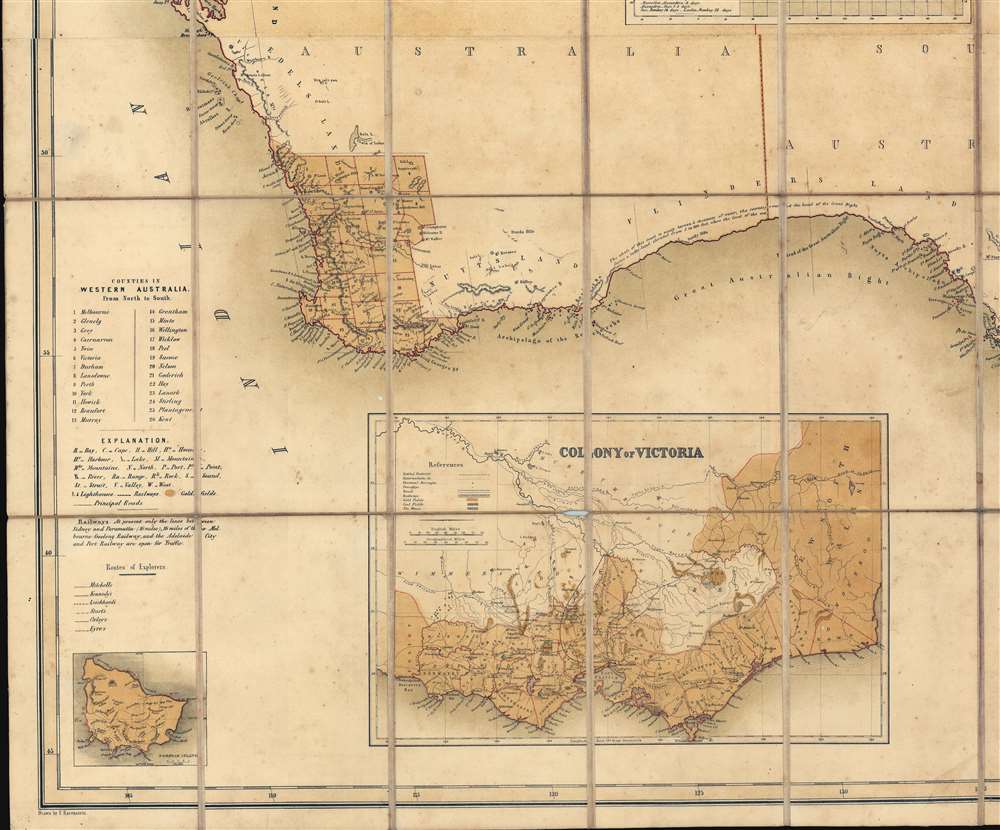 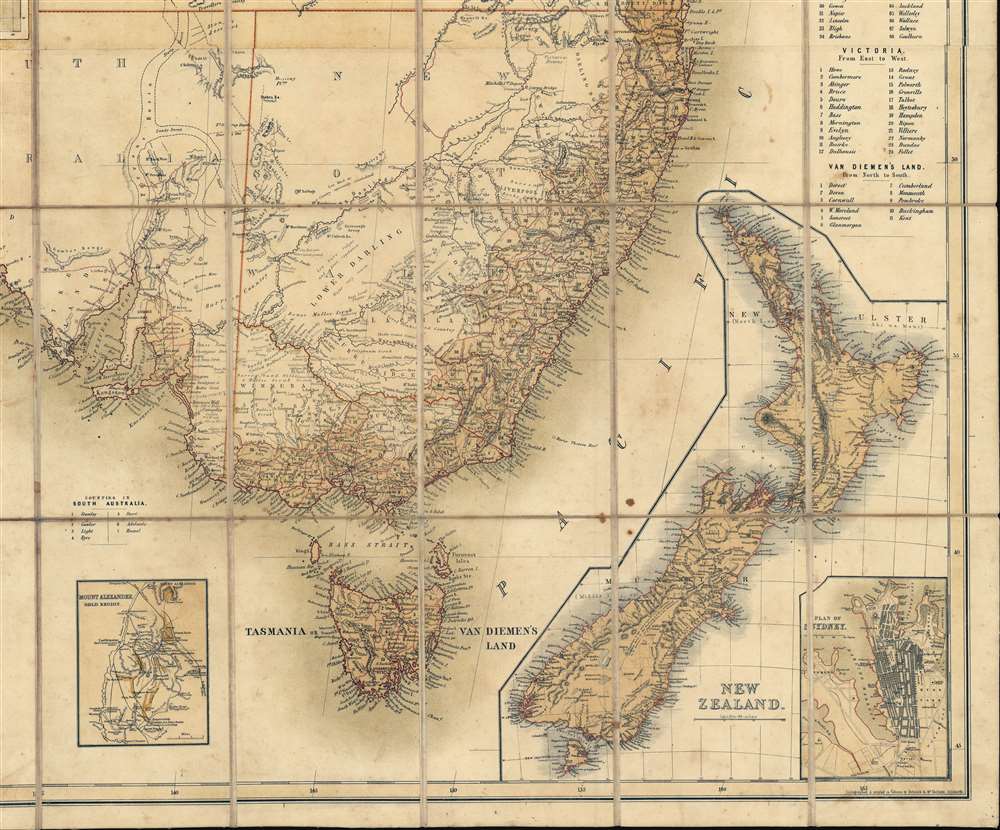 The most striking commercial map of Australia during the Gold Rush Era.

A rare and striking first-edition chromolithograph gold rush era map of Australia issued by Ernst Georg Ravenstein in 1857 - without a doubt one of the largest and most decorative commercial maps of Australia to appear in the 19th century. The map covers the entire continent with insets detailing nearby New Zealand, the colony of Victory, Sydney, the Mount Alexander gold region, Norfolk Island, and commercial maritime routes to and from Australian ports. The first edition, as here, features two dramatic vignettes: the wharves at Melbourne and a curious British Royal crest modified to honor Prince Albert. The map depicts Australia in the midst of a continent-wide population explosion driven by a series of gold rushes lasting over half a century. Lest there be any doubt that this is a Gold Rush map, the map's striking chromolithograph color is awash with golden tones suggestive of prosperity and promise.

While this map may seem late to be an Australian Gold Rush map, it in fact falls somewhat early in the history of gold discovery on the continent. Gold rushes followed one after another in Australia from 1851 to 1908. Gold was known to be present in Australia prior to 1851, but the intentional suppression of this information by the colonial government of New South Wales prevented all-out gold rushes. When gold was discovered at Sutter's Mill, California, in 1848, causing the California Gold Rush, countless Australians migrated in search of their fortunes. Desirous of maintaining their dwindling workforce, the colonial governors rethought their position, and sought approval from the Colonial Office in England to allow the exploitation of the mineral resources, offering rewards for the discovery of payable gold. This led to the first major Australian gold rush when prospector Edward Hargraves discovered gold at Ophir, near Orange. A series of subsequent discoveries followed, transforming the Australian economy and leading to a rush of new immigration. In Victoria, for example, Melbourne (illustrated here), which had a population of around 29,000 in 1851, grew to over 500,000 by 1861 and then to 700,000 by 1869. This population boom forced the British government to allow the Port Philip District to secede from New South Wales to form the Colony of Victoria. Gold production in Victoria exceeded all other gold producing regions in the world, with the exception of California, with its highest annual yield reaching 3,053,744 troy ounces in 1856. It is estimated that between 1851 and 1896 a total of 61,034,682 ounces of gold were extracted from mines in Victoria. Mount Alexander / Castlemaine, depicted here in a special inset, was among the richest claims. With gold sitting just under the surface, diggers easily unearthed 2.4 million pounds of gold in just 7 months.

The Royal Crest and German Motto

The Royal Crest, unique to this edition, represents more than simply Great Britain. It is slightly modified by the motto Treu und Fest, meaning 'Faithful and Strong'. Within 2 years, this motto would come to represent a British regiment, the 11th Hussars, but in 1857, it was the motto of the German Saxe-Coburg-Gotha dynasty. Ravenstein likely included the motto to honor Prince Albert (1819 - 1861), a fellow German and member of both the Saxe-Coburg-Gotha house and the British Royal family through his 1840 marriage to Queen Victoria. Albert's marriage to Victoria made 'Germanness' popular in England. Driven out by the failed 1848 Spring of Nations Revolutions, intellectuals, including Ravenstein and his mentor Petermann, fled Germany en masse. Most set their eyes on America, but more than 30,000 settled in Britain. For this group, Prince Albert was a symbol of acceptance and potential in their adopted home. One can only wonder if Ravenstein slipped the motto in clandestinely and if it was rejected by his superiors? Given the scarcity of examples featuring the crest as well as its removal in the 2nd state, also 1857, it is a safe bet.

The map includes an unusual inset of Norfolk Island, a small and remote island off the eastern coast of Australia. Finding the island abandoned in 1788, Great Britain used it as a convict penal settlement. The island served de facto unescapable prison until 1855, when it was slated for civilian settlement. In June 1856, descendants of the Bounty mutineers were resettled on Norfolk from Pitcairn Island, establishing the islands' first permanent civilian residences. It is no doubt this unusual change in status, and the general interest anything relating to the Mutiny on the Bounty engendered, that caused the island to be featured here.

The map was drawn by Ernst Georg Ravenstein, representing one of his earliest works, issued when the great scholar was just 23. It was engraved on stone by Schenk and McFarlane of Edinburgh, and published by Adam and Charles Black. Cartographically it is derived from British Surveys and maps, as well as French Surveys of the Napoleonic Era. The map exists in two known editions, both published in 1857. The first has the A. and C. Black imprint. The second exhibits additional imprints for Longman and Company, and Victor von Zabern of Maynce. Of the two, this, the first, is the rarer, notable for its inclusion of a finely engraved Royal Crest and a vignette illustration of the Melbourne Wharves. The map is represented in several institutions, but most examples correspond to the 2nd edition, lacking the crest and vignette. We have positively identified only two examples of this edition, those being located at the British Library and the National Library of Australia. The map is exceptionally scarce to the market, with no record of another example of this edition evident.


Charles and Adam Black (fl. 1807 - present) were map and book publishers based in Edinburgh. Charles and his uncle, Adam, both of Edinburgh, Scotland, founded their publishing firm in 1807. They published a series of maps and atlases throughout the 19th century. In addition to an array of atlases, the Black firm is known for their editions of the Encyclopedia Britannica (1817 - 1826) and the first publishing of Sir Walter Scott's novels in 1854. In 1889 the A. & C. Black publishing house moved to London where it remains in operation to this day. Learn More...