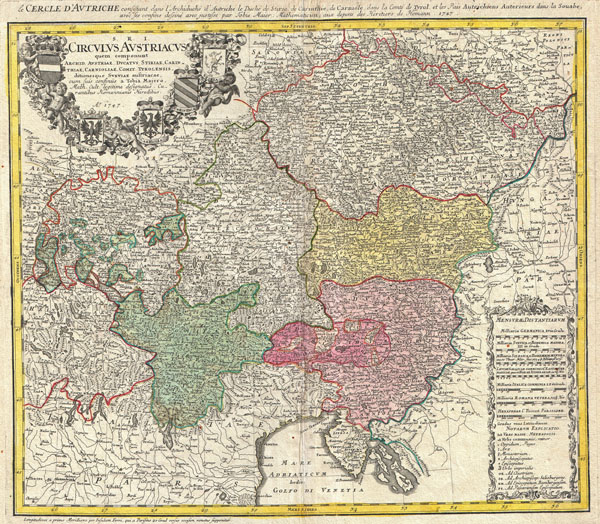 A beautifully detailed 1747 Homann Heirs map of Austria and Bohemia ( Czech Republic). Includes parts of Italy, Switzerland, Germany, Croatia, and Hungary. The map is filled with information including fortified cities, villages, roads, bridges, forests, castles and topography. Elaborate title cartouche in the upper left quadrant features three cherubs and four armorial shields: Austria, Tyrolis, Carniolia, Carinthiaand Stiria. This map was drawn in Nuremberg by Johann Tobias Mayer for inclusion the 1752 Homann Heirs Maior Atlas Scholasticus ex Triginta Sex Generalibus et Specialibus…. Most early Homann atlases were 'made to order' or compiled of individual maps at the request of the buyer. However, this rare atlas, composed of 37 maps and charts, was issued as a 'suggested collection' of essential Homann Heirs maps.

Stanford University, Map Collection, Germany 0108.
Looking for a high-resolution scan of this?