1844 Black Map of the Austrian Empire 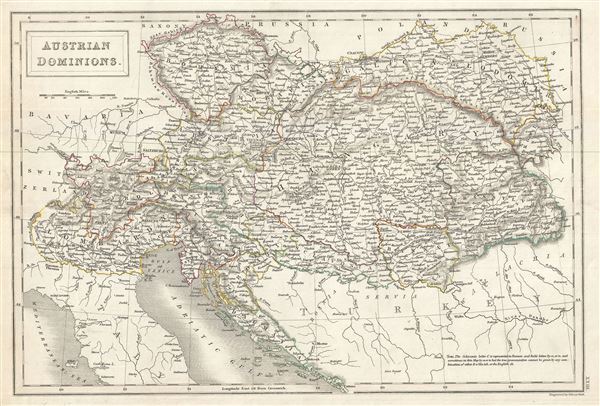 1844 Black Map of the Austrian Empire

This is a fine example of Adam and Charles Black's 1844 map of the Austrian Empire. The map covers the territories claimed by the once vast Austrian Empire, including in whole or part the modern day nations of Austria, Hungary, Germany, Italy, Albania, Croatia, Romania, and the Czech Republic. It also includes parts of Turkey, Switzerland, Germany, Russia, Prussia and Poland. Various important towns, cities, rivers, mountains and several other topographical details are noted with relief shown by hachure.

The Austrian Empire, founded in 1804 by the last Holy Roman Emperor, Francis II, lasted only till 1866. It was transformed into the Austro-Hungarian Empire after Austria was defeated in the Austro-Prussian War of 1866. This map was engraved by Sidney Hall and issued as plate no. XXIII in the 1844 edition of Black's General Atlas.