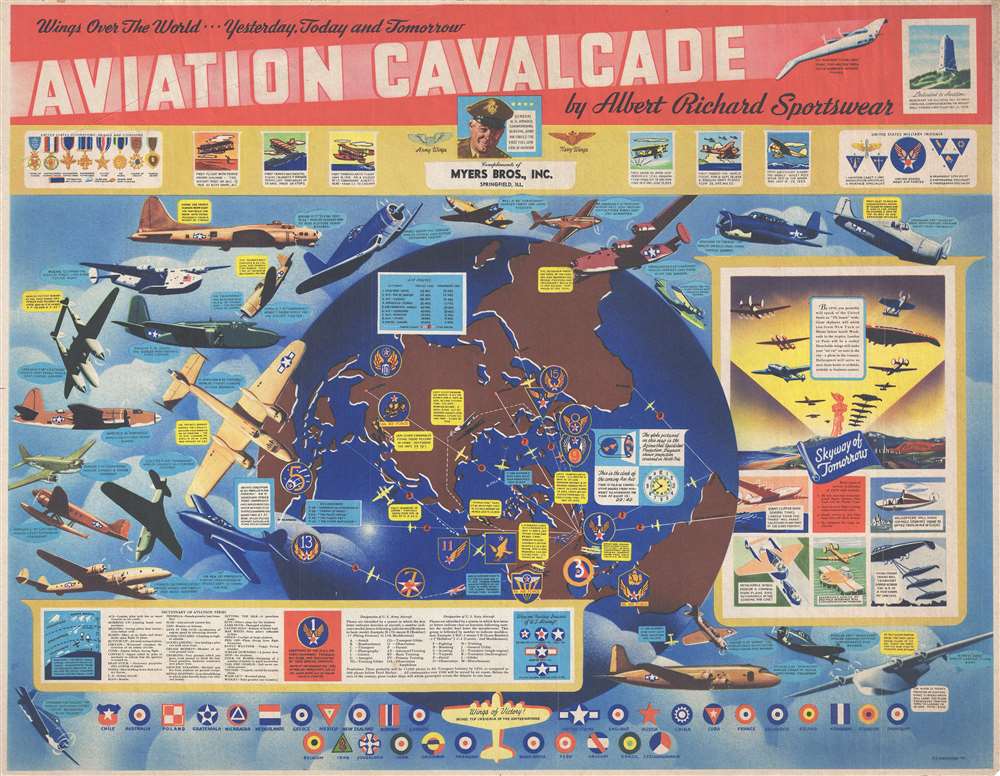 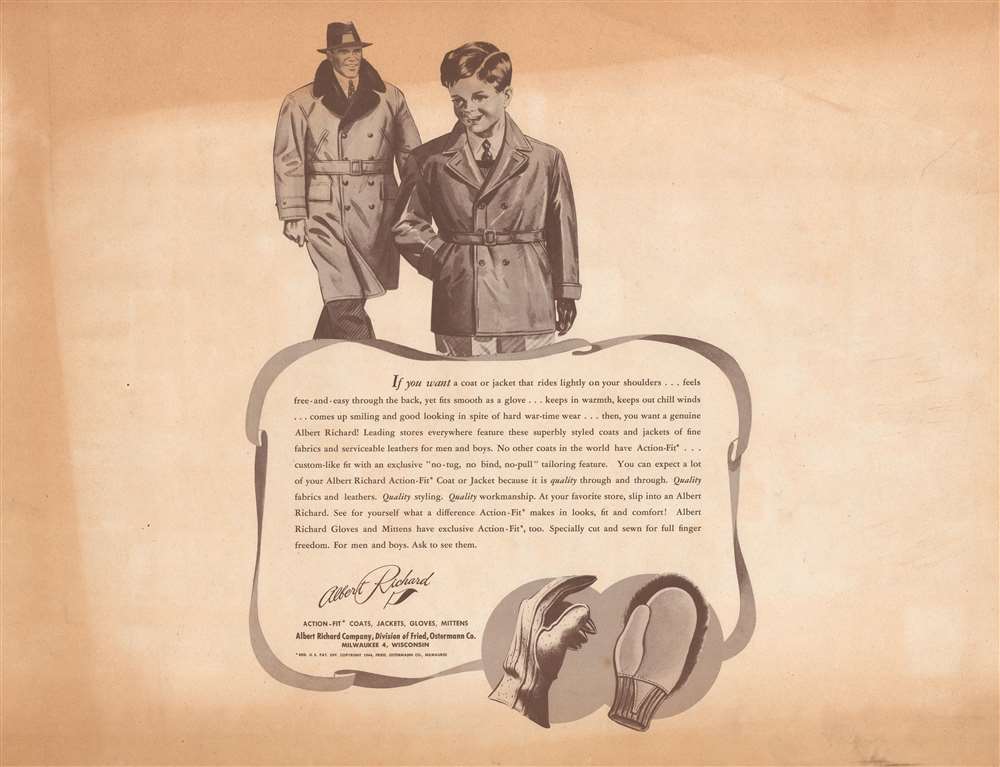 This is an extremely scarce 1944 F. E. Cheeseman and Albert Richard pictorial propaganda broadside map promoting U.S. military aviation. Situated at the center of the broadside, a map depicts the world using an azimuthal equidistant projection centered on the North Pole. A series of nine air routes is overlaid onto the world map, illustrating the comparative distances to different cities across the globe. Information concerning historic flights is included, such as the first Transatlantic flight, Amelia Earhart's first solo flight across the Pacific, and the first flight around the world. Other wartime information is also overlaid, such as the location of all fifteen U.S. Air Force Commands, along with General Chennault's Flying Tigers in Southeast Asia and the now famous Doolittle Raid. A table of air routes (specifically those depicted on the world map) is included on the upper left, with current, and projected, flight times.

Aviation content encircles the central globe, with illustrations of two dozen aircraft. Each aircraft is labeled and accompanied by a laudatory caption. Among the aircraft illustrated are the B-17 'Flying Fortress', the Chance-Vought F4U 'Corsair', the Republic P-47 'Thunderbolt', the Lockheed P-38 'Lightning', and the North American P-51 'Mustang'. Each of the aircraft included on the map played a critical role in the Allied WWII war effort and demonstrated key technological improvements.

This History of Aviation and Projections for the Future - Flying Cars?!

Several text boxes create a sort of border around the aircraft and include information about the history of powered flight, U.S. military decorations, medals, citations, and insignia, a 'dictionary of aviation terms', and an explanation of U.S. Army and U.S. Navy aircraft designations. Two boxes along the right contain predictions concerning the future of aviation, stating that 'giant skyliners will whisk you from New York to Miami before lunch' and that 'detachable wings will make your 'air car' an auto in the city – a plane in the country'. A sea change is predicted to the 'skyway of tomorrow' with flying freight trains. Plus, the insignia of the United Nations are illustrated along the bottom border.

This map was drawn by F. E. Cheeseman and published by Albert Richard Sportswear in 1944. We believe that each of the locations which sold Albert Richard products were given these broadsides with the business's name printed on it, as Myers Bros., Inc. of Springfield, Illinois, is printed on this example. Today this map is extremely rare. There are no examples identified on the OCLC.

The Albert Richard Company (c. late 1920s - c. 1955) began as a division of the Fried-Ostermann Company of Milwaukee, Wisconsin. Fried-Ostermann was a glove manufacturer, and in the late 1920s, decided to diversify their production and opened a division to produce outerwear, which they called Albert Richard. Albert Richard produced leather jackets, mackinaws, overcoats, and sportswear and would soon become more profitable than the glove-making part of the company. Before World War II, Albert Richard advertising focused on health and sports, and received endorsements from college football players. During the pre-war era, Albert Richard also published a series of poster size college football maps, which bore advertisements for the company’s jackets on the verso.After the outbreak of World War II, Albert Richard began manufacturing flight jackets for the military under the name of their parent company Fried-Ostermann. Leather jackets, overcoats, and similar products were heavily advertised by Albert Richard during the war. They also gave their jackets model names like ‘Spitfire’ and ‘Meteor’. During the war Albert Richard also gave away wall-sized posters depicting various American military aircraft. Fried-Ostermann sold Albert Richard to the Drybak Corporation of Binghampton, New York in 1952. Daybook began manufacturing Albert Richard clothing in 1953 at a factory in New Jersey, with plans to move production to New York by 1954. However, in 1955, Drybak bought the Martin Mfg. Co. of Martin, Tenessee, closed their operations in Binghampton and moved to the plant in Tennessee, where labor prices were lower. Learn More...

Very good. Exhibits. some toning. Printed advertisement on verso.
Looking for a high-resolution scan of this?