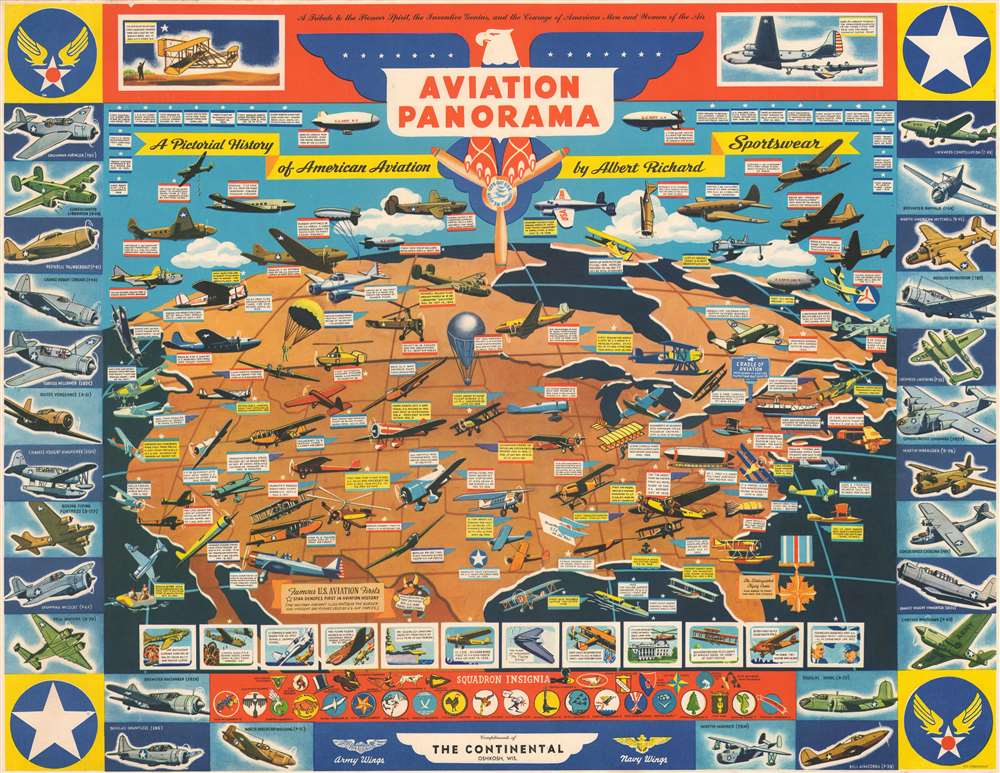 Promotes American aviation advancements and accomplishments in both the military and civilian spheres at the height of World War II.
$1,200.00

Published in November 1943 at the height of World War II, this F.E. Cheeseman advertising broadside map of the United States promotes achievements and advances in American aviation. Dozens of different airplanes, varying from early biplanes to the most modern military bombers, fighters, and transport aircraft, are illustrated flying over the United States.

Nearly all of the planes and other aerial vehicles depicted are associated with an aerial achievement, including speed, distance, and endurance records and other important milestones in American aviation. Vignettes along the top border illustrate a chronology from the beginning of powered flight to groundbreaking aviation advances. The Wright Brothers historic first flight in a heavier-than-air machine in Kitty Hawk, North Carolina is depicted on the left, while the B-19 and the Mars Gigantic Flying Boat are drawn on the right to represent the most advanced planes to date. Vignettes along the bottom highlight important milestones in military aviation, from Eddie Rickenbacker's successes in the air during World War I to the Flying Tigers in China, the Doolittle Raid on Japan, and President Roosevelt's flight to Casablanca - the first by an American president. Below these are illustrations of insignia from patrol, bombing, torpedo, observation, and scouting squadrons. Illustrations of twenty-six military aircraft create the left, right, and bottom borders. Among these are the North American B-25 Mitchell, the Boeing B-17 Flying Fortress, the Curtiss P-40 Warhawk, the Lockheed P-38 Lightning, and the North American P-51 Mustang.

Although undated, we have unearthed advertisements promoting the distribution of this map in Boy's Life and Life magazines from November 1943.

This broadside was created by F.E. Cheeseman and published by the Albert Richard Company in 1943. An example is part of the David Rumsey Map Collection, and this piece is not catalogued in the OCLC. We are aware of only one other instance when this piece appeared on the private market.


Albert Richard Company (c. late 1920s - c. 1955) began as a division of the Fried-Ostermann Company of Milwaukee, Wisconsin. Fried-Ostermann was a glove manufacturer, and in the late 1920s, decided to diversify their production and opened a division to produce outerwear, which they called Albert Richard. Albert Richard produced leather jackets, mackinaws, overcoats, and sportswear and would soon become more profitable than the glove-making part of the company. Before World War II, Albert Richard advertising focused on health and sports, and received endorsements from college football players. From about 1938 to 1950, Albert Richard partnered with F. E. Cheeseman to published a series of poster size college football maps, which bore advertisements for the company’s jackets on the verso. After the outbreak of World War II, Albert Richard began manufacturing flight jackets for the military under the name of their parent company Fried-Ostermann. Leather jackets, overcoats, and similar products were heavily advertised by Albert Richard during the war. They also gave their jackets model names like ‘Spitfire’ and ‘Meteor’. During the war Albert Richard also gave away wall-sized posters depicting various American military aircraft. Fried-Ostermann sold Albert Richard to the Drybak Corporation of Binghampton, New York in 1952. Daybook began manufacturing Albert Richard clothing in 1953 at a factory in New Jersey, with plans to move production to New York by 1954. However, in 1955, Drybak bought the Martin Mfg. Co. of Martin, Tenessee, closed their operations in Binghampton and moved to the plant in Tennessee, where labor prices were lower. Learn More...