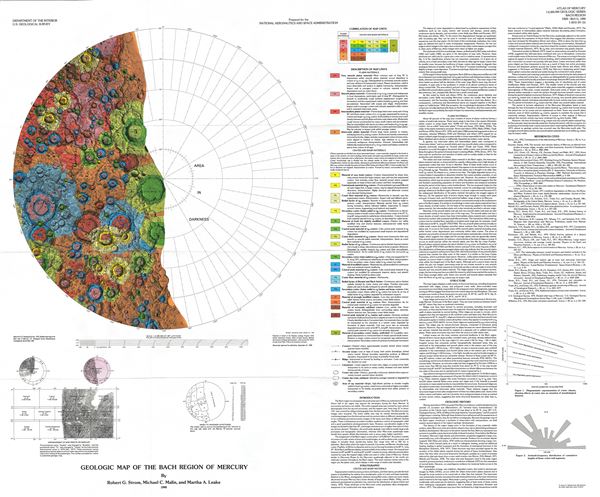 This is a beautiful example of the U. S. Geological Survey's 1990 map of the Bach Quadrangle of the planet Mercury. This geologic map, based on the images from Mariner 10, depicts half of the Bach region - the other half being beyond the terminator during the three Mariner 10 encounters. Detailed notes and descriptions of map units are included on the right half of the sheet.

The Mariner 10, launched in November 1973, was on a flyby mission to study the atmosphere, surface and physical characteristics of the planet Mercury. It was also assigned to explore the planet Venus. The Mariner 10 was not only the first spacecraft to visit the planet Mercury, it also was the first to make multiple flybys of any planet (it had three encounters with Mercury as it looped around the Sun). Contact with the Mariner 10 ceased in March 1975, though it is still believed to be orbiting the Sun.

This map is created by Robert G. Strom, Michael C. Malin and Martha A. Leake in 1990 for the National Aeronautics and Space Administration and published by the U.S. Geological Survey as Atlas of Mercury Geologic Series map I-2015.