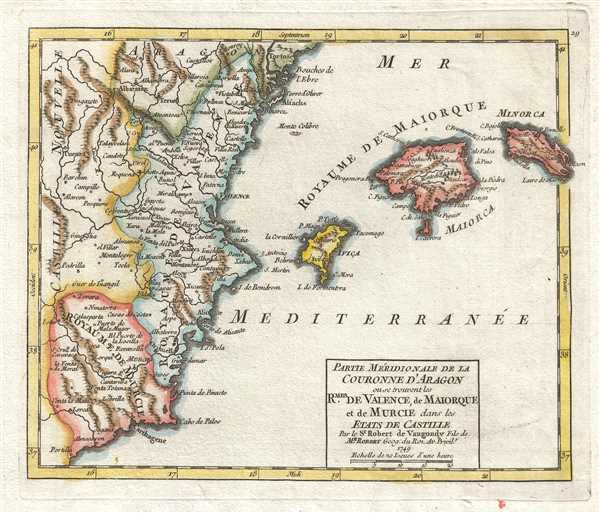 This is a hand colored 1749 Didier Robert de Vaugondy map of the Balearic Islands. The map depicts from Castile, Spain to Minorca and from Aragon to Murcia. The Kingdoms of New Castile, Aragon, Murcia, and Valencia are depicted in continental Spain, and the three Balearic Islands, Majorca, Minorca, and Ibiza are depicted off the coast of Spain in the Mediterranean Sea. Rivers and mountain ranges winde their way across Soain, through myriad cities and towns that populate the kingdoms of Spain. The Kingdom of Majorca (Royaume de Maiorque) is made up of Majorca (Maiorca), Minorca, and Ibiza (Iviça). Per the map, each island houses one city, but several coastal locations are labeled on each island. Today, Majorca, Minorca, and Ibiza are very popular vacation and party destinations for tourists from all over the world.

This map was engraved by Guillaume Delahaye and was published by Gilles Robert de Vaugondy in his Atlas Universel, Portatif et Militaire in the 1749 edition.