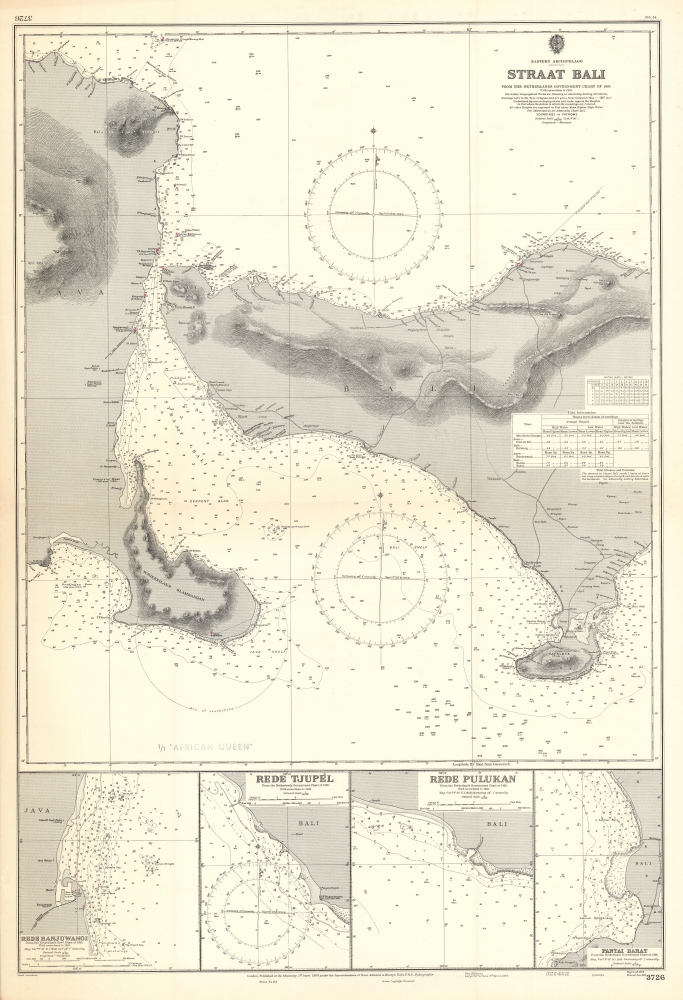 This is a British admiralty chart or nautical map of the Bali Strait, the narrow passage between the islands of Java and Bali, from among the charts of a working oil tanker. The chart is derived from a 1907 Dutch chart produced while the island was still a colonial possession of the Netherlands. This Admiralty chart, though initially engraved in 1909, was corrected and reprinted in 1954. The chart shows the easternmost coastlines of Java, and the coasts of the western half of Bali. In addition to the expected depth soundings and notations of magnetic variations, the chart is remarkably well detailed with respect to the coastlines. Elevations are shown topographically, lighthouses are marked in red, and visually important landmarks are noted: Temples, a pyramid, and even 'House with Zinc Roof (conspicuous)' appear as references for the coastal navigator.

The insets show redes - roadsteads, or safe anchorages - of harbors shown on the main chart. These include Banjuwangi (a town on the eastern end of Java, at the southern mouth of the Bali Strait) and the Tjupel coast across the Strait from Banjuwangi; Pulukan, further south along the Bali coast and Pantai Barat, at the southern extremity of Bali's west coast. All of these anchorages would have been essential for ships navigating the Straits shown on the main chart.

While, alas, not related to her namesake immortalized by Bogart and Hepburn, the T/T African Queen had stories of her own. A Norwegian tanker, the (Liberian registered) 'African Queen' would remain afloat only four scant years after adding this chart to her library. On December 10th, 1958, she ran aground on Gull Shoal and broke up off the coast of Ocean City, Maryland with a crew of 46 and a cargo of 21,000 tons of crude oil, bound for the Mobil refinery at Paulsboro, N.J., on the Delaware River. The captain and crew survived, abandoning the ship - which would become target for countless collectors, salvage speculators, and other pickers over the next year. The stern was eventually raised and brought to port - a boondoggle. The bow remains on the bottom of the ocean.

Admiralty charts such as this one were produced in large numbers, but heavily used, and typically were destroyed when obsolete; in strong condition they are scarce. They are neglected in institutional collections, as is this one, which has not been cataloged in OCLC.