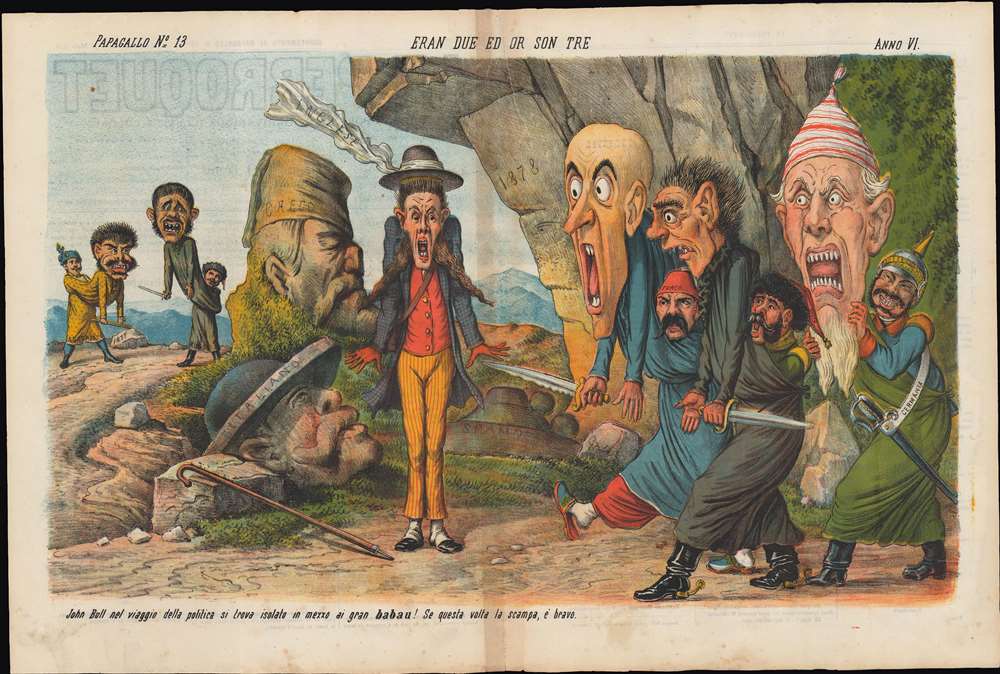 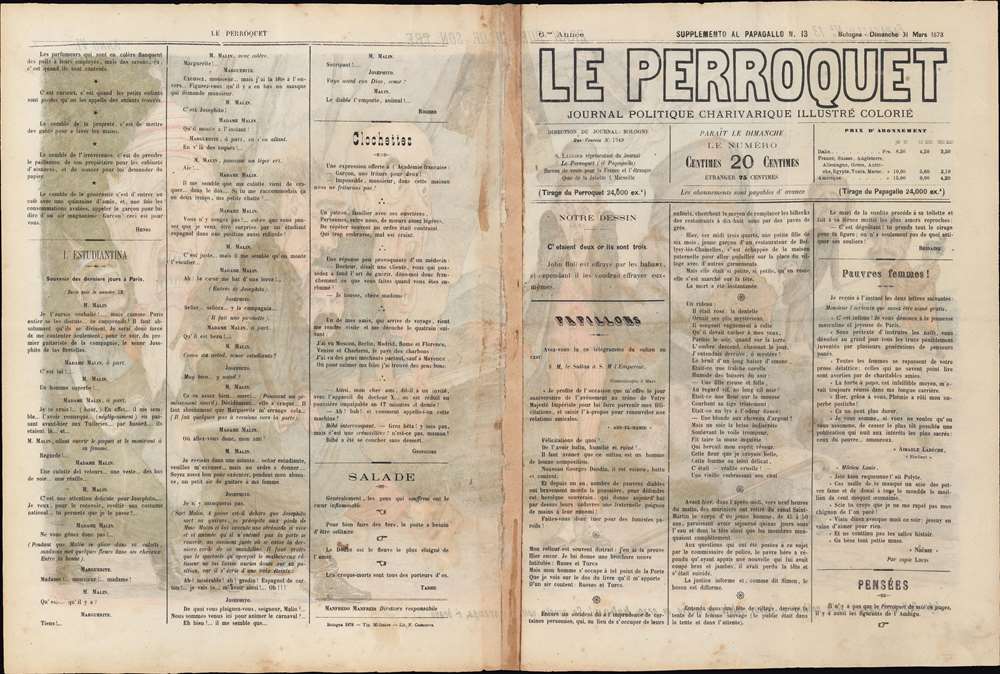 John Bull ambushed on the road of geopolitics.
$950.00

This is a March 1878 chromolithograph political cartoon that appeared in the Italian journal Il Papagallo (The Parrot), lampooning the British response to the closing stages of the Russo-Turkish War (1877 - 1878) and the lead up to the Congress of Berlin.

The caption beneath the cartoon reads: 'John Bull on the journey of politics finds himself isolated in the midst of a great ogre! If he escapes this time, he's good.' The verso, a supplement to Il Papagallo in French, contains a brief explanation of the cartoon 'John Bull is frightened by ogres; and yet he would like them to frighten themselves.' The ogres referred to are Russia, Turkey, and Germany, while Italy and Greece sit by as implacable onlookers. The suggestion is that Britain was surprised several times throughout the conflict and its aftermath, and continuously frustrated in trying to broker a peace while protecting its own interests.

Context of the Cartoon

The caricature is in reference to British efforts to end the Russo-Turkish War and prevent Russian hegemony in the Balkans or threats to British interests in the eastern Mediterranean. The Ottoman Empire gradually lost territory throughout the 19th century, including at the hands of nationalist independence movements in the Balkans, which were supported by Tsarist Russia. The British and French were also happy to take advantage of Ottoman weakness, but feared a complete collapse of the empire, lest Russia fill in the vacuum and become dominant throughout Eastern Europe and the eastern Mediterranean.

Therefore, both countries strongly supported the Ottomans in the Crimean War (1853 - 1856) and the British opposed Russian intervention in nationalist uprisings against the Ottomans in 1875 - 1876, which precipitated the Russo-Turkish conflict. More broadly, both countries were interested in maintaining the framework of the Concert of Europe established after the Napoleonic Wars (1803 - 1815), and the British in particular were engaged in a global tussle for influence with Russia, centering on the Middle East and Central Asia.

As both the war and public opinion in Europe (on account of well-publicized atrocities committed by Ottoman troops and paramilitaries) turned against the Ottomans, the British sought to negotiate an end to the conflict, resulting in the Treaty of San Stefano on March 3, 1878. Yet, Russian troops continued to march towards Istanbul, and Britain scrambled to organize other European powers to oppose further Russian advances. In this, they were aided by the newly unified Germany under the leadership of Chancellor Otto von Bismarck (1815 - 1898), who similarly opposed Russian conquest of the remaining Ottoman lands.

In the end, Bismarck organized the Congress of Berlin in June-July 1878, stole Britain's thunder as peacemaker, and the Treaty of Berlin was signed at the conclusion of the conference, which nullified large parts of the Treaty of San Stefano. The latter treaty aimed to divvy up influence in the Balkans, mainly by limiting Russian ambitions, strengthening Austria-Hungary, and maintaining the Ottoman Empire's existence, with other powers, especially Germany and Britain, acting as external referees. The arrangement did prevent another war in the region for several decades, but also laid the groundwork for the Balkan Wars of 1912 and 1913 while also moving Germany and Austria-Hungary towards an alliance (signed the following year) against Russian influence in the Balkans, two important factors in the start of World War I (1914 - 1918).

Il Papagallo claimed to be the first political humor journal with color illustrations in Italy. It was founded in January 1873 by Augusto Grossi (1835-1919), specializing in color-printed caricatures like this one. At its peak, circulation reached 50,000, and in 1877 a Parisian version, Le Perroquet, and London edition, The Parrot, were launched. Il Papagallo closed in 1915, when Grossi was 70 years old.

Il Papagallo bears resemblance to the British Punch, the French Le Charivari, and the cartoons of Thomas Nast in the United States. Artistic and humorous qualities aside, these publications were popular due to their lighthearted approach to serious affairs and easy digestibility for a population that was not entirely literate, yet more engaged in politics due to the widening of the franchise. In the case of Italy, the country had recently completed the long project of national unification when this cartoon was drawn, and voting was restricted to wealthy men, though would soon be expanded to middle-class men.

This cartoon appeared in the March 31, 1878, edition of Il Papagallo. No author or artist is listed. It is not cataloged independently in any institution's holdings, and Il Papagallo is only held in a handful of institutions in Europe and North America. It is very scarce to the market.

Very good. Earlier adhesion and repairs on the verso.