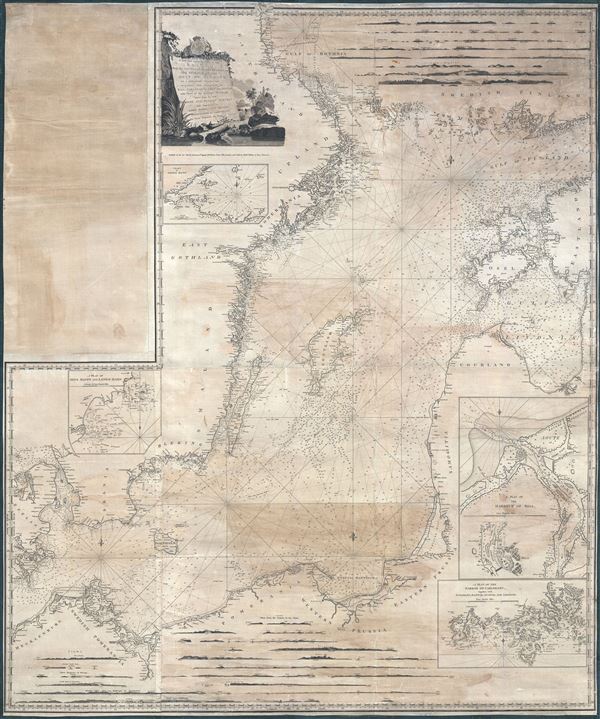 A new and correct Chart of the Baltic from the Cattegat to Soderhamn and the entrance of the Gulf of Finland on a Mercator's Projection. Including the harbors of Riga, Carlshamn, Aus and Geffle, with Views of the principal Headlands taken from the best Swedish and Russian Surveys; and Improved by John Hamilton Moore Hydrographer and Chartseller to his Royal Highness the Duke of Clarence.
1791 (dated)     49.5 x 41.75 in (125.73 x 106.045 cm)     1 : 794000

Extremely rare, this is a 1791 wall sized nautical chart or maritime map of the Baltic Sea by John Hamilton Moore. The map covers from the Gulf of Bothinia and the coast of Finland south to Pomerania, Prussia, and the Kattegat, and from Denmark east to the Gulf of Livonia. In modern terms, this map covers the Baltic Sea in the vicinity of Sweden, Finland, Estonia, Latvia, Lithuania, Poland, Germany, and Denmark. There are several inset plans detailing the Harbor of Riga, the Harbor of Carlshamn, the city of Riga, Geffle Haven, and Ahus Haven / Lando Hamn. There are countless nautical sounding throughout and series of 26 sore profile views decorate the upper right and lower quadrants.

The large decorative title cartouche drawn and engraved by J. Stephenson appears in the upper left quadrants and exhibits a bucolic Scandinavian scene. One can only wonder if this is J. Stephenson is one in the same or a relative of the John Stephenson, a coal trade captain, who is known to have provided Moore nautical information to more that was eventually compiled into some of his more popular charts of the North Sea and Thames Estuary.

This chart is exceedingly scarce. We have identified only two other examples, one in the collection of the Bibliotheque Nationale de France, the other in the Biblioteca Nacional de Espana.

John Hamilton Moore (1738 - 1807) was a Scottish teacher of navigation, chartseller, and hydrographer active in London during the latter part of the 18th century. He is best known as a publisher of Blueback Nautical Charts and the founder of the firm that would one day become Imary and Son. Moore was born in Edinburgh and was educated in Ireland before joining the Royal Navy. After leaving the navy he set up a navigation academy in Brentford, Middlesex. Around 1772 he published the navigation textbook The New Practical Navigator and Daily Assistant. The work became the most popular such text of its day and ran into some 17 editions, firmly establishing Moore's credentials. Around 1781 Moore established himself at 127 Minories, near Tower Hill, London, where he taught navigation to a select audience as well as traded in navigational instrument and nautical charts. Moore began publishing his own charts. These were among the earliest blueback charts, called such for their distinctive blue paper backing. Moore took on draughtsman William Heather and John Noire, both future publishers of blueback nautical charts in their own right, to drawn and engraves his charts. Personally more was known to be boastful and somewhat controversial. He apparent once described himself as 'having a propensity for genius'. He was also accused of 'debauching a servant'. In the 1790s he started calling himself, 'Hydrographer and Chartmaker to his Royal Highness the Duke of Clarence'. It is unclear whether or not his claim was based on fact, but certainly Moore's many enemies in the chart publishing industry called him out on the matter, publishing a broadside declaring Moore a 'Pretender'. Either way, Moore dropped this claim by 1804. Moore was succeeded by a son, also John Hamilton Moore, and several daughters, one of whom married Robert Blachford, who became a prominent chart publisher in Moore's wake. Despite the seeming prosperity of his business, Moore seems to have died in relative poverty in Chingford, Essex. Nonetheless, his obituary in The Gentleman's Magazine, a sign in and of itself of Moore's social significance, offered him high praise, "he caused the best Charts to be published that had ever been done by any individual in this or any other nation." Learn More...

Good. Professionally restored and backed on clean linen. Some discolorations.