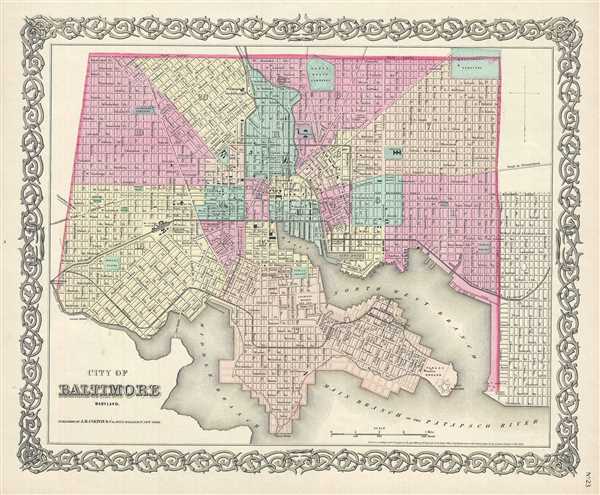 Colton's depiction of the city of Baltimore, Maryland.
$150.00

An excellent 1856 example of Colton's map of Baltimore, Maryland. The map is a lithographic plan covering the city of Baltimore from Gwinns Falls (and Bridge) to Seventh Street and from Green Mount Cemetery to the Patapsco River. Map is hand colored in pink, green, yellow and blue pastels according to Baltimore's 20 city wards and offers wonderful detail at the street level including references to the important buildings, cemeteries, roads, railroads and squares. Identifies the city Hospital, Railroad Depot, Mt. Clare Station, St. Mary's College, and the City Jail. Surrounded by Colton's typical spiral motif border. Dated and copyrighted to J. H. Colton, 1855. Published from Colton's 172 William Street Office in New York City. Issued as page no. 23 in volume 1 of Colton's 1856 Atlas of the World.