1854 Pharoah Map or Plan of the City of Bangalore or Bengaluru, India 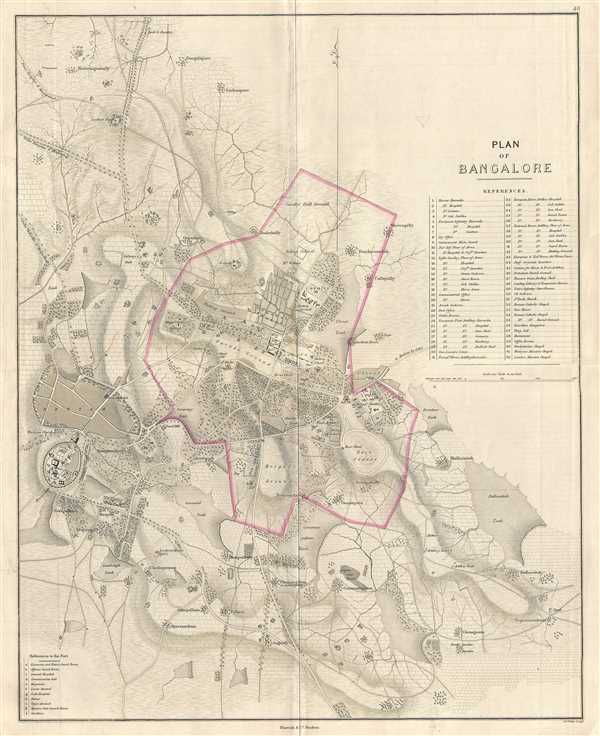 1854 Pharoah Map or Plan of the City of Bangalore or Bengaluru, India

Beautiful early plan of the city of Bangalore or Bengaluru, India.

This is a beautiful 1854 map or plan of the city of Bangalore (Bengaluru), in the Indian state of Karnataka. It covers the old city in 1854 when it was part of the Princely State of Mysore, a nominal sovereign entity of the British Raj controlled by the Maharaja of Mysore. The map extends from the Bangalore Fort east to the Challaghatta Lake (now the Karnataka Golf Association) and north to Gungalapore. A reference under the title lists the various locations noted on the map. Another reference lists the various buildings within the Bangalore Fort noted on the map.

The map focuses on the old city of Bangalore. The British captured Bangalore Fort in 1791 and following the death of Tipu Sultan; it became part of the Princely State of Mysore. Given its pleasant weather, the British cantonment was moved to Bangalore from Seringapatam. Gradually the town around the cantonment absorbed several villages and gradually expanded. Today, Bangalore or Bengaluru is the third most populous city in India.

This map was engraved by J. and C. Walker and issued as plate no. 48 by Pharoah and Company in their 1854 Atlas of Southern India.