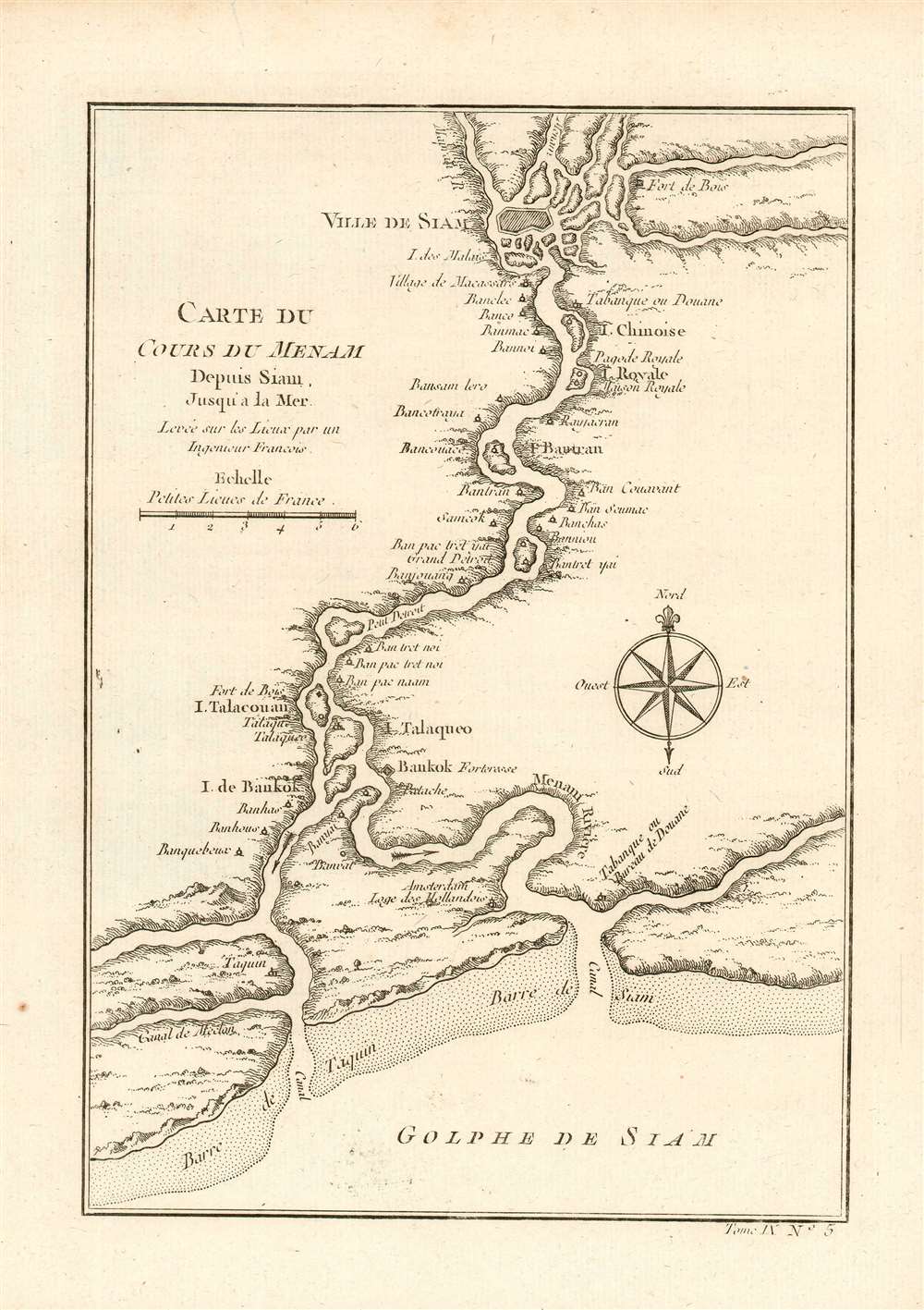 Derived from maps produced by France's embassies to the Kingdom of Siam.
$250.00

This is an elegant 1752 Bellin map of Bangkok and its surroundings. It details the course of the Chao Phraya River from the former Thai royal capital Ayutthaya (known to Europeans as the 'Ville de Siam'), past the small trading post of 'Bankok,' (Bangkok) to the Gulf of Thailand. Menam, or Mae Nam, literally means 'river.' Places identified along the river include the Royal Pagoda, the Bankok Fortress, and Dutch headquarters. This is among the excellent maps produced by Bellin for inclusion in Abbe Prevost's L'Histoire Generale des Voyages, in spite of that being a work whose entertainment value outstripped its veracity. Bellin's cartography is drawn from a similarly-named map appearing in French Jesuit Guy Tachard's 1688 Voyage de Siam, recounting the 1687 mission of Simon de la Loubère to Ayutthaya. That map was credited to one 'Monsieur de la Mare, Ingénieur François' who had been assigned to the mission. (This 1688 map appears to be extremely rare: we see no separate examples of the de la Mare map having reached the market.)

A Flourishing Artery of Trade

At the time this map was made, Ayutthaya was one of the most prosperous cities in East Asia, and possibly the largest city in the world, with close to 1 million inhabitants. Trade flourished with the Dutch, French, Chinese, and Japanese, with influence spanning from the Malay Peninsula, the Andaman ports of present day Myanmar, the Angkor kingdom of Cambodia, to northern Thailand. Ayutthaya's power would wane in the second half of the 18th century: not long after the creation of this map, the powerful Kingdom of Burma (Myanmar) would begin a war with the Thais of Ayutthaya: in 1767 they broke through the walls, sacked the city and burned it to the ground. The royal family fled, the king dying of starvation in hiding just ten days later. Two years later, the Thai commander, General Taksin, would reunite the Thai kingdom, vanquish the Burmese, and establish a new seat of power to the south: Bangkok.

This map was drawn by Jacques Nicolas Bellin and published as plate no. 5 in volume 9 of the 1752 French edition of Abbe Prevost's L'Histoire Generale des Voyages. OCLC lists nine copies of the separate map in various editions. Prévost's Histoire is well represented in institutional collections.