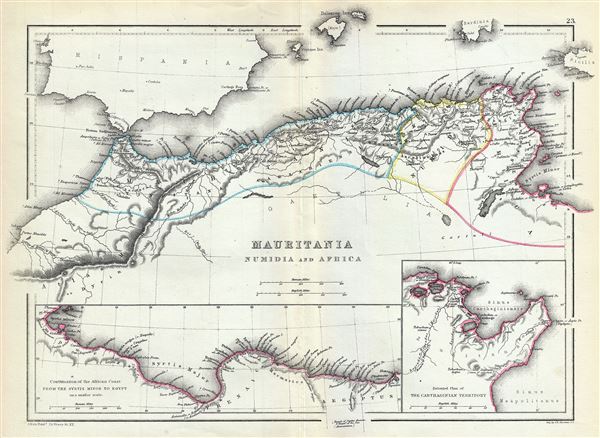 This is a beautiful 1867 map of the Barbary Coast or northern Africa in antiquity by William Hughes. The map depicts the ancient empires of Mauritania, Carthage and Numidia or what is today the Barbary Coast. It covers from the Atlas Mountains on the western coast of modern day Morocco, east as far as modern day Tunisia. An inset map along the bottom border (Continuation of the African Coast from the Syrtis Minor to Egyot), covers from Tunisia eastward as far as Egypt. Another inset in the lower right quadrant features an enlarged plan of the Carthaginian Territory.

The Carthaginian Empire was formed after Carthage (identified here) gained independence from the Phoenician colonies in 650 BC. Carthage became the center for trade the Carthaginian Empire dominated much of the region, until Numidia, the Kingdom to the west of Carthage, allied itself with Rome in 206 BC leading the Roman conquest of the region in 201 BC. By the end of the third Punic war, the city of Carthage was leveled by Rome, thus ending its independent existence. Carthage's great general Hannibal, nearly conquered Rome with his highly trained war elephants, before being turned back at the very brink of victory. Still further west, the Kingdom of Mauretania was established as the Roman Province of Mauretania Casariensis.

This map was created by William Hughes, printed by J. Bien and engraved by G.E. Sherman, for issued as plate 23 in Sheldon and Company's An Atlas of Classical Geography.