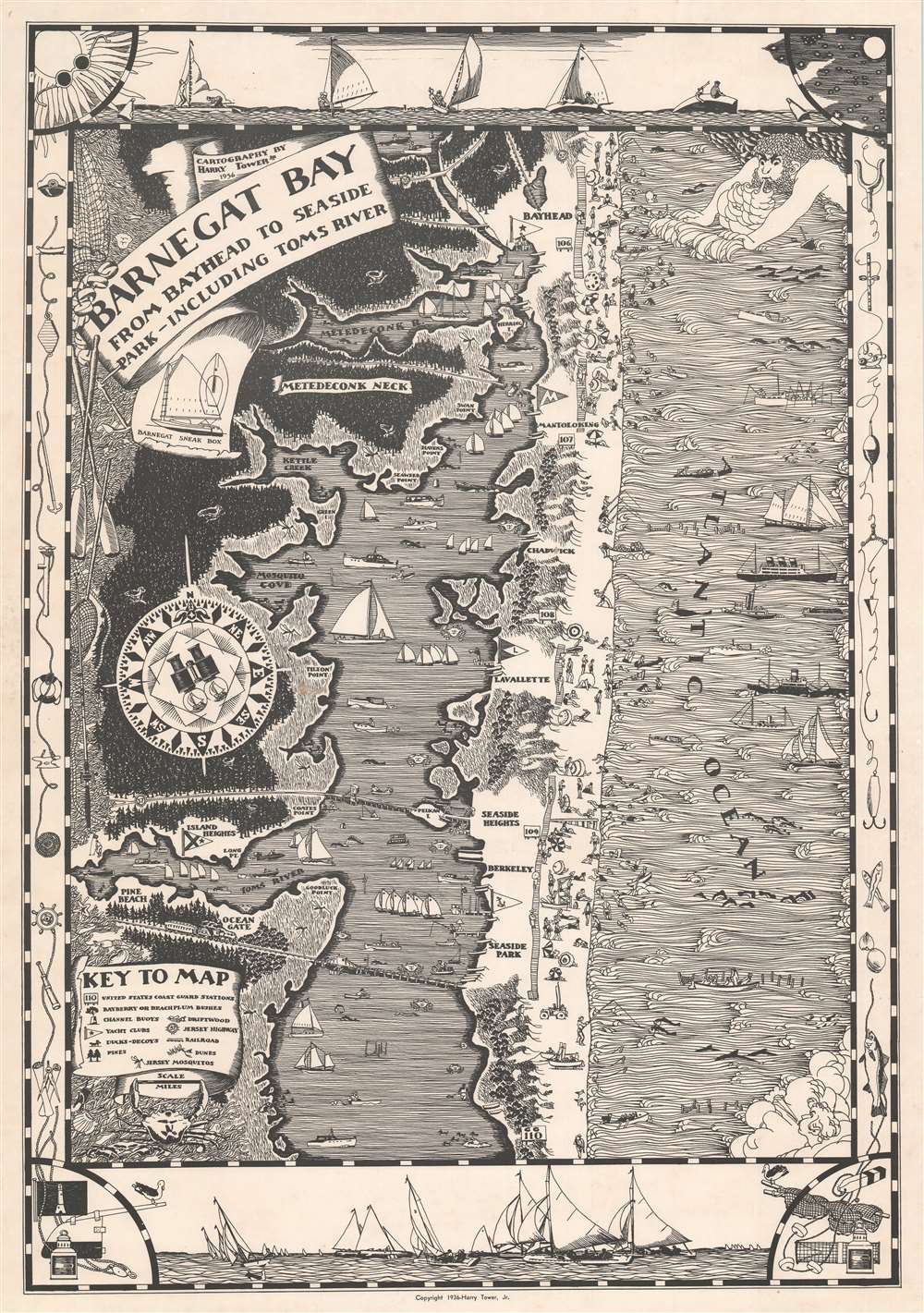 This is a 1936 pictorial map of Barnegat Bay and the Barnegat Peninsula, part of the beloved Jersey Shore, by Harry L. Tower, Jr. Bayhead, Mantoloking, Lavalette, Seaside Heights, and Seaside Park, renowned destinations on the Barnegat Peninsula, all appear with boardwalks and beachgoers reinforcing the region's celebration of summer. Small sailboats and other pleasure craft ply the waters of Barnegat Bay, while the woodlands of the Jersey coastline lend an air of the exotic and exclusive to the Peninsula. Ocean liners and deep-sea fishing vessels, alongside dolphins and schools of fish, are seen in the Atlantic. A key situated in the lower right corner explains many of the illustrations, including the massive 'Jersey mosquitos' that are bigger than the pleasure-seekers on the Barnegat Peninsula. A nautically themed border surrounds the whole work. Sailboats adorn the top and bottom border and ropes, life preservers, fish hooks, and fishing line decorate the left and right sides.

This map was created and published by Harry L. Tower, Jr. in 1936. One example is cataloged in OCLC and is part of the institutional collection at Pennsylvania State University.

Harry L. Tower, Jr. (April 9, 1912 - March 5, 2001) was an American artist. Born in West Bridgewater, Massachusetts, Tower served as a radio operator in a B-24 with the 409th Bomber Squadron of the 93rd Bomb Group in Norwich, England and North Africa during World War II and earned the Air Medal with three Oak Leaf Clusters and the Distinguished Flying Cross. He was a graduate of the Newark School of Fine and Industrial Arts and worked in charcoal, oil, and watercolors. His early art career was in advertising, creating illustrations of furniture for newspaper advertisements. Tower had a particular fondness for painting landscapes and was also known for his paintings of his home golf course, the Canoe Brook Country Club in Summit, New Jersey. He married his wife Loris Gross Tower, after he returned from World War II. Learn More...