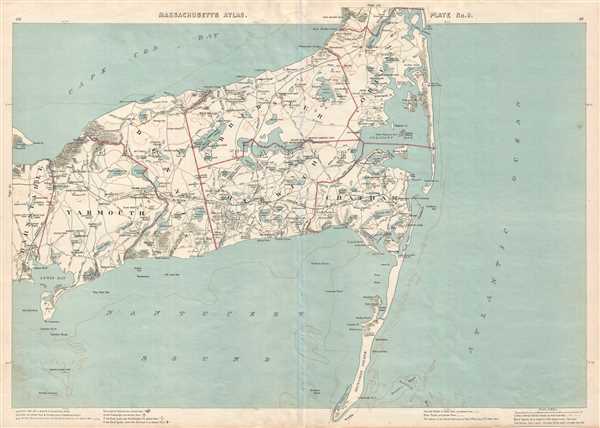 A detailed map of the central part of Barnstable County on Cape Cod.

This is an 1891 George H. Walker and Company map of part of Barnstable County, Cape Cod, Massachusetts. The map depicts the region from Hyannis to the Atlantic Ocean and from Cape Cod Bay to Nantucket Sound and Monomoy Island. Highly detailed, the towns of Barnstable, Yarmouth, Dennis, Harwich, Chatham, Brewster, and Orleans are illustrated. The limits between each town highlights in red, so as to easily recognize where each settlement begins and ends. Post offices, churches, and schools are among the few identified locations, although some villages are labeled. Numerous pond and lakes are illustrated and labeled throughout the region, and the road network is included, although not all the roads are labeled. The Old Colony Railroad Cape Cod Division is depicted by a thin solid black line running through the center of the map. Numerous bars, shoals, bays, and other coastal features are identified as well.

This map was published by George H. Walker and Company in the Atlas of Massachusetts in 1891.