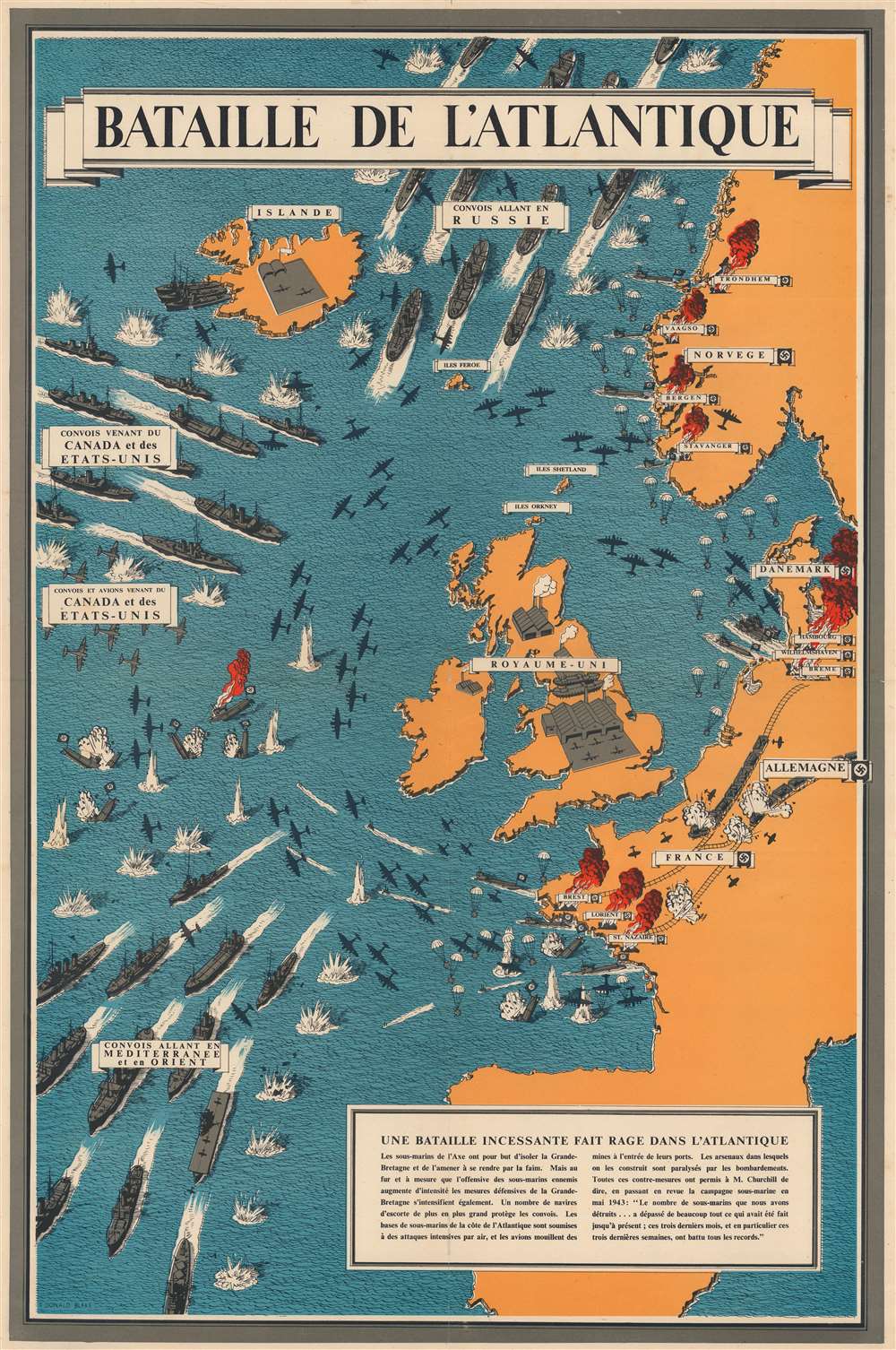 British propaganda celebrating 'victory' in the Battle of the Atlantic.
$3,000.00

This is a 1943 Frederick Donald Blake pictorial propaganda broadside of the Battle of the Atlantic - one of the longest and bloodiest campaigns of World War II (1939 - 1945).

The poster illustrates troop and supply convoys streaming across the Atlantic towards Europe from the United States and Canada. They are beset by German u-boat 'wolfpacks' (Rudeltaktik), but defended by British and American escort ships and planes. Defeated Nazi submarines are shown sinking off the coast of Ireland and France, while the sub pens at Wilhelmshaven, Lorient, and St. Nazaire are burning. Harbors along the Norwegian coast are also in flames. Allied bombs devastate railroads in France and Germany.

Winston Churchill, the British Prime Minister during World War II, claimed that the only part of the war that ever truly frightened him was the 'U-boat peril'. As the war in continental Europe raged, Britain was fighting for its very survival in the Atlantic. Churchill believed that Germany's best hope of winning the war was through destruction of Allied shipping. Between the fall of France in June 1940 and the end of that year, German U-boats, mines, and aircraft succeeded in sinking three million tons of Allied shipping. If Britain had been cut off from the rest of the world by Hitler's 'wolfpacks', the war surely would have been lost. Through Allied persistence and commitment, along with new technology, tactics, and intelligence efforts, the effectiveness of German U-boats gradually waned. The Battle of the Atlantic was never truly 'won' by either side despite being one of the longest campaigns in the war. Between 75,000 and 85,000 Allied seamen perished while ferrying supplies across the Atlantic.

This broadside was created by Frederick Donald Blake and published by the Ministry of Information in 1943. Editions of this map were published in Arabic, Dutch, English, French, and Portuguese. We note a single cataloged example of the present French edition in OCLC: University of Illinois at Urbana Champaign. A further example is part of the collection at the Imperial War Museum.

Frederick Donald Blake (1908 - 1997) was a Scottish artist. Born in Greenock, Scotland, Blake and his family moved to London during his childhood. He attended the Camberwell School of Art and began working in an interior design business as an architectural draftsman at the age of fifteen. He was drafted in early 1940 and began working for the ministry of Information creating propaganda posters and maps. He also worked for the Daily Express three nights a week, creating war maps and impressions of battles. After the war, Blake worked as a freelance and commercial artist, creating works for the aircraft industry, bus companies, and the railways. Blake continued working as an artist for the rest of his life, with painting always taking first place. He gained a reputation as a painter, won the Hunting Art Prize in 1982 for his watercolor 'Stormy Harbor', and had work exhibited throughout Europe and the United States. Learn More...