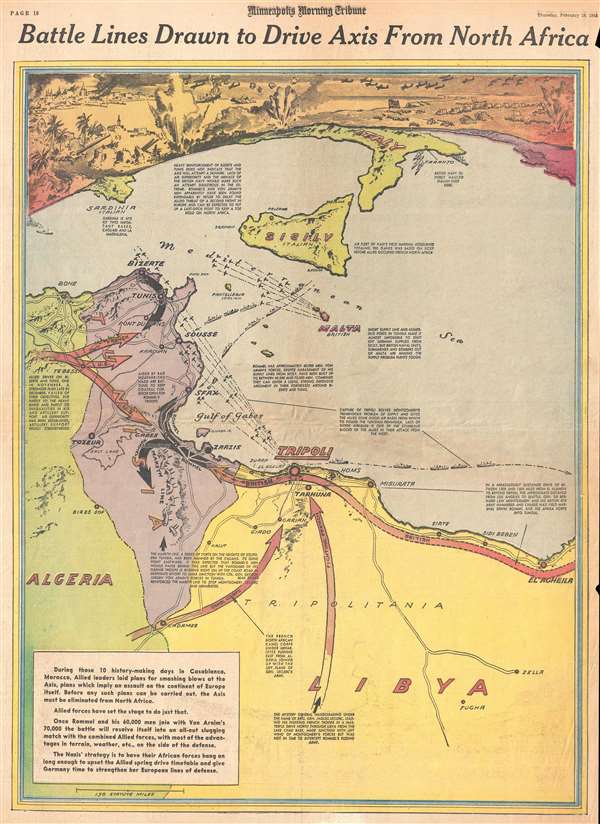 Illustrates the final stages of Allied victory in North Africa against Erwin Rommel and the Afrika Korps.
$250.00

This is a February 18, 1943 Minneapolis Morning Tribune pictorial map of the final stages of the Allied campaign against Nazi Field Marshal Erwin Rommel and the Afrika Korps in North Africa. The map depicts the region from Algeria to Libya and from southern Italy across the Mediterranean to southern Algeria and Libya. Highly detailed, the route of General Sir Bernard Law Montgomery and his 8th Army is highlighted along the Mediterranean coast of Libya, along with French and American routes from the south (Fighting French forces from French Equatorial Africa) and east (U.S. Army and Free French forces who participated in Operation Torch – the Allied landings in Morocco and Algeria). Rommel and Nazi General von Armin were now caught between two advancing armies and the Mediterranean Sea. Per a caption on the map, 'Rommel's and von Armin's men apparently [had] been found expendable by Hitler to delay the Allied threat of a second front in Europe and [were] expected to put up a last-ditch fight to keep a toe hold on North Africa.' Even though they occupied the heavily-fortified Tunisian cities of Bizerte and Tunis, the British Navy and Allied air superiority made escape an impossibility. This meant that the Allies were assured victory in North Africa.

The Battle of North Africa Before February 1943

General Montgomery, who had taken over command of the 8th Army the previous August, had achieved a stunning victory at El Alamein in Egypt in November, which prevented the Nazi advance into Egypt and the Middle East. This kept Rommel's forces from occupying the port of Alexandria, critical to the supply lines of the British 8th Army, and from having direct access to oil in the Middle East. In an incredible twist of fate, the Allied landings in Morocco and Algeria coincided with the Battle of El Alamein, placing Allied troops on both sides of the Afrika Corps (although a few thousand miles apart). The victory at El Alamein was the first major victory for an Allied army during World War II and led to a much-needed boost in morale among Allied forces. This map highlights events that took place after the Battle of El Alamein, but that victory was essential for Allied success in North Africa.

A Detailed Look at the Map Itself

As stated above, the route of Montgomery's 8th Army along the Mediterranean coast of Libya is highlighted, along with the routes of American and French forces in the region. Numerous cities are labeled, including Tripoli, in Libya, which had only recently been captured by the British, and Sfax, Sousse, Tunis, and Bizerte in Tunisia. The Mareth Line, Germany and Italy's fortified line of defenses in southern Tunisia, is also illustrated and labeled. Several captions throughout the map do an excellent job of illuminating the situation in North Africa and why these events are important to the Allied war effort. A stylized view, along the top border, illustrates combat in North Africa, with a burning city on the top left (probably Tunis), large shore guns on the bottom left, and the advancing Allied army on the right (the Union Jack is clearly visible – the Stars and Stripes appear to be present as well, but faded). Airplanes are illustrated in the sky on their way to attack targets, and two ships are sinking off the coast.

Stylistically this cover owes a debt to the work of Richard Edes Harrison, an American illustrator and cartographer who, working for Fortune magazine, pioneered a new style of representing the world for WWII era propaganda maps. Edes developed the convention of using spherical perspective with an exaggerated vertical dimension, as on the present map, to illustrate part of the world as part of a greater global situation. This map was published by the Minneapolis Morning Tribune on Thursday, February 18, 1943.

Very good. Newsprint. Even overall toning. Closed tears along left and right margins professionally repaired on verso. Text on verso.
Looking for a high-resolution scan of this?