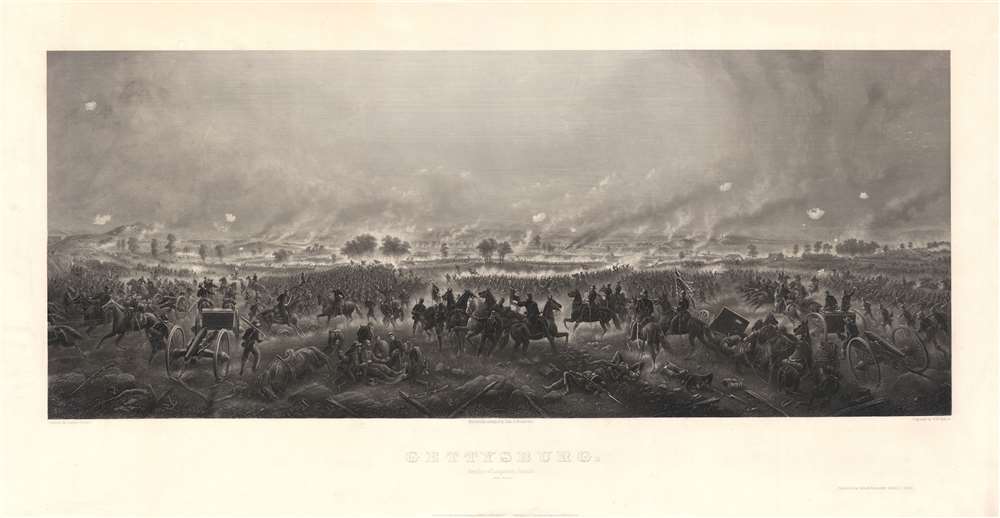 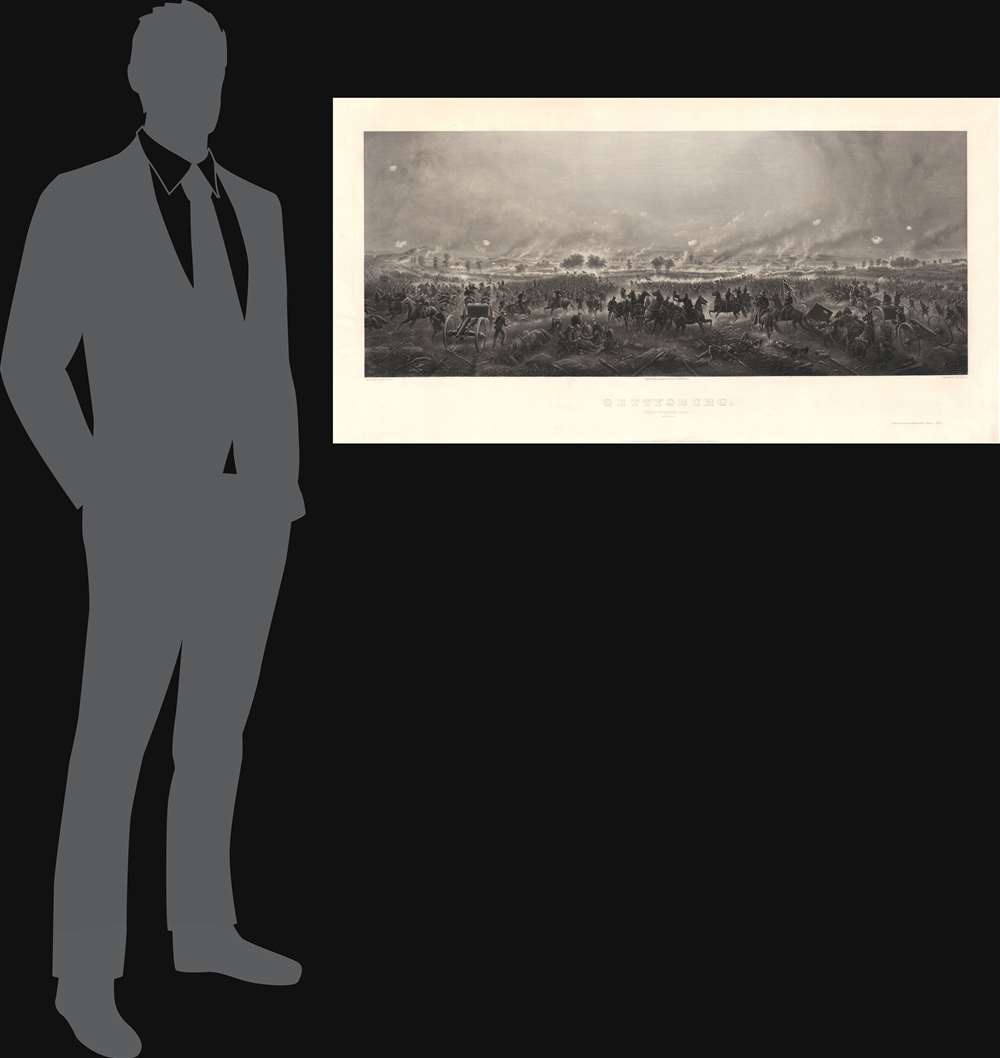 The 'high water mark' of the Confederacy and turning point of the Battle of Gettysburg.
$2,500.00

A stunning 'India Proof' first edition example of John Badger Bachelder and James Walker's 1876 steel-engraved view of the American Civil War Battle of Gettysburg. The view is derived from James Walker's incredible 20-foot-wide painting of Pickett's Charge, identified here as Longstreet's Assault, considered the 'high water mark' of the Confederacy and the turning point not only of the battle, but of the American Civil War (1861 - 1865).

John Badger Bachelder was determined to chronicle the most important battle of the American Civil War, hoping to capture an historic moment like Emanuel Leutze's 'Washington Crossing the Delaware'. He arrived on the front lines in 1862 and began meticulously detailing battles, not knowing which would be the defining engagement. When news arrived, he rushed to Gettysburg, arriving one day after the battle. In the words of Confederate General Wade Hampton of South Carolina,

…he reached the battlefield of Gettysburg before the dead were buried, remaining for eighty-four days, making plans of the field, visiting the wounded in hospital, and by permission taking the convalescent officers over the field, by whom their positions and movements were pointed out and established.

He subsequently issued a detailed report of the battle, three maps, and a dramatic view. Based upon his meticulous research, Bachelder was able to reconstruct the battle. He commissioned the artist James Walker to paint a grand mural illustrating Longstreet's disastrous charge (Pickett's Charge) on fortified Union Lines at what was called the 'Bloody Angle,' evident here at center.

James Walker's great painting was subsequently completed under Bachelder's guidance between 1864 and 1870. The final work, a masterpiece of military imagery measuring 7 x 20 feet, was an immediate sensation, heralded by critics and veterans alike,

At once a fine work of art and a wonderful illustration of the battle's history. - Boston Herald

This is a noble picture, a grand trial of strength of and comprehensiveness, and evidently of great fidelity. - The Daily Journal

My Command of the Battle of Gettysburg on the 3rd day of July, occupied the greater portion of the front of the painting. In my opinion it not only represented the positions of the troops, but indicated their relative movements with a foresight that must make it invaluable as a historic representation of that scene. - Winfield Scott Hancock (depicted on horseback near the Round Tops)

I am glad to be able to express in the form of a testimonial that this picture is one of the most faithful and conscientious representation of the Battle of Gettysburg that will or can be produced. - Alexander S. Webb

The view is laid out in a modified triptych form. It presents Pickett's Charge from a position behind Union lines. The Round Tops high ground appears at left, and the town of Gettysburg in the distance at right. An earthen barricade, breached by Confederate forces, runs across the center of the map. Wounded men lie in the foreground. At right, Confederate prisoners of war are being escorted off the battlefield - but in a touching moment, a Union soldier shares his water canteen. At left, below the Round Tops, Major General Winfield Scott Hancock (quoted above) is depicted directing the battle from horseback.

On the third day of the battle, July 3, the fight remained undecided, with both sides committed to victory. Confederate General Robert E. Lee, reasoned that the center of the Union Line was a weak point and commanded Lt. Gen. James Longstreet to organize a charge (Maj. Gen. George Pickett, for whom the charge is named, was one of three Confederate generals under Longstreet.) of 12,000 men in hope of seizing Cemetery Ridge - a critical high point well positioned to control the road network. The Confederates did briefly break through Union fortifications but suffered enormous losses and were unable to maintain their position. The charge proved disastrous and, from that point, the battle, and the war, went poorly for the Confederacy. It is thus that Bachelder considers the moment illustrated here, just as the Confederate charge is being broken, the 'high water mark' of the Confederacy and the turning point of the American Civil War. In Bachelder's own words,

From the grand assault of Longstreet's command, on the third day of the battle, the Confederate army retired bloodily repulsed and forever broken; Lee's army never again recovered from the blow which it here received. The repulse of Longstreet's charge was consequently not only the decisive episode of this decisive battle, but of the war; for this reason, the designer of this painting has chosen it as the subject… (Bachelder, Descriptive Key, pages 9 - 10)

Bachelder was always keen to profit on his detailed recording of the Battle of Gettysburg. He hired the engraver Henry Bryan Hall (fl. 1850 - 1900) to make a reduced steel-plate version of the painting in 1876. He sold the print by subscription, receiving nearly 1000 individual orders. The present example bears a note below the title identifying it as an 'India Proof', referring to a printing on bright smooth lightweight paper known for holding the ink better and revealing finder details. The term 'India Proof' does not necessary denote a pre-publication variant, rather it is more rightly considered a special, higher end, issue of what is, in this case, also the first edition.


James Walker (June 3, 1819 - September, 1889) was an English-American artist active in the middle part of the 19th century. Walker was born in England an emigrated to the United States sometime in the 1830s or 1840s. He gained renown for painting battle scenes of the Mexican-American War (1846 - 1848). Later, during the American Civil War (1861 - 1865), Walker was contracted by John Bachelder (1825 - 1894) to paint Pickett's Charge, what Bachelder determined was the pivotal moments in the Battle of Gettysburg, hence the American Civil War, hence the history of the United States. That painting, The Repulse of Longstreet's Assault, July 3, 1863. easily Walker's largest and most famous, earned him national fame. Walker died in Watsonville, California in September of 1889. Learn More...

Library of Congress, 2013645393. The Johnson Collection (Original Painting). Gilder Lehrman GLC02131.02.
Looking for a high-resolution scan of this?