1891 Kurz and Allison View of the Civil War Battle of Stone River, Tennessee 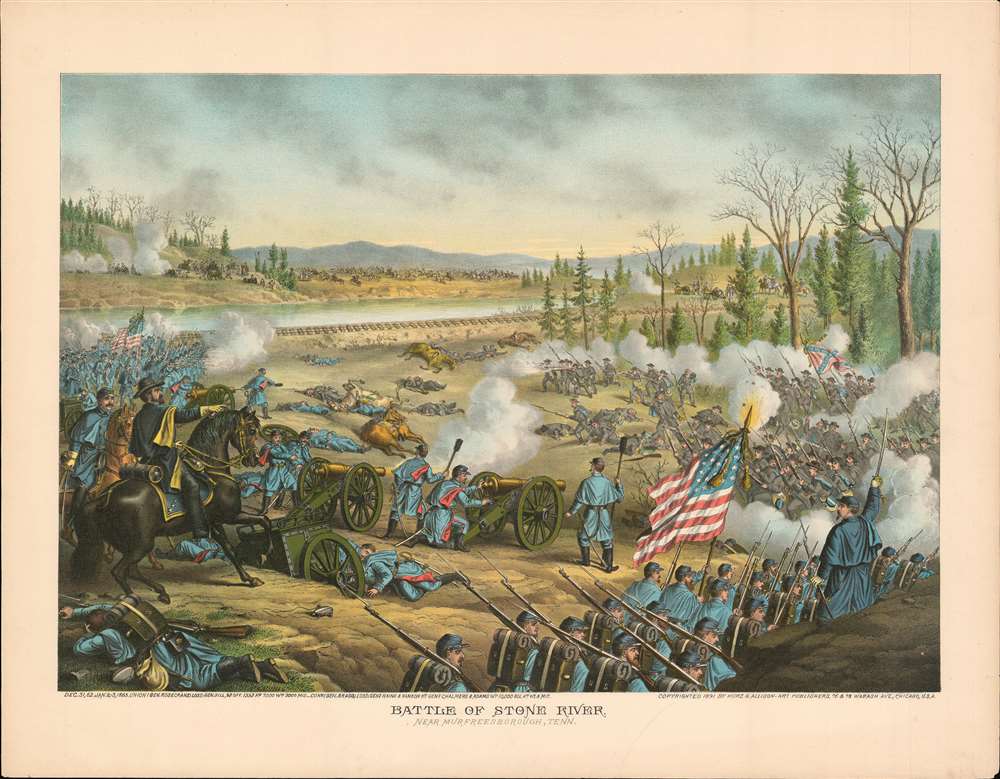 1891 Kurz and Allison View of the Civil War Battle of Stone River, Tennessee

The highest overall percentage of casualties of any American Civil War battle.

This is an 1891 Kurz and Allison chromolithograph view of the American Civil War Battle of Stones River. Kurz and Allison present a stylized view of the battle, with Union Major General Rosecrans in the foreground on the left. With Union troops on the left and Confederate soldiers are on the right, Kurz and Allison correctly depict the fighting on both sides of the Stones River. The several cannons on the Union side likely allude to the critical role of Union artillery in repulsing two Confederate attacks on January 2. The field is littered with casualties, a reference to the battle's high human cost.

A Most Costly Engagement

Fought between December 31, 1862, and January 2, 1863, the Battle of Stones River saw the highest overall percentage of total casualties of any Civil War battle, including Shiloh and Antietam. 78,400 men, from both the Union and Confederate armies, fought, and 24,645 were either killed, wounded, or missing when the fighting ceased - nearly 1/3 of all forces in the engagement. Four brigadier generals, two Confederate and two Union, were killed or mortally wounded during the battle, and Frances Elizabeth Quinn, a woman, fighting as a man in the Union army, was among those wounded.

This view was created and published by Kurz and Allison in 1891. This view is not cataloged in OCLC, but we have located examples in the collections of the Tennessee State Library and Archives and the Kentucky Historical Society.

Tennessee State Library and Archives 31937. Kentucky Historical Society 1976.58.07.
Looking for a high-resolution scan of this?