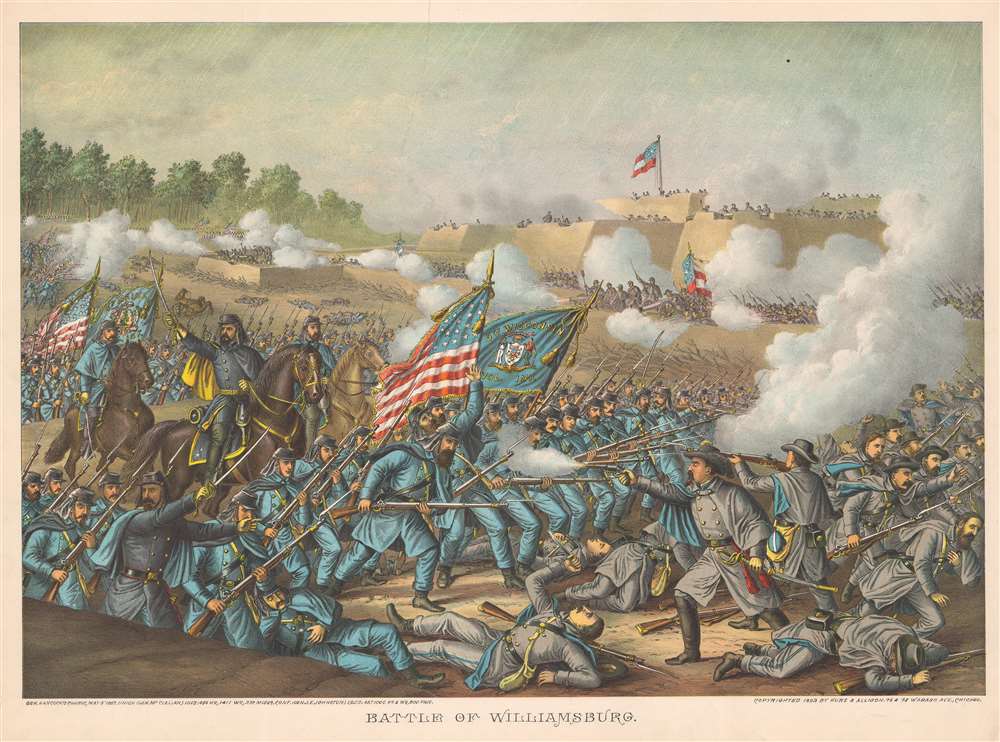 The first battle of the Peninsula Campaign.
$650.00

This is an 1893 Kurz and Allison chromolithograph view of the Battle of Williamsburg during the American Civil War (1861 - 1865). Depicting the counterattack led by General Winfield Scott Hancock, Union troops advance on a Confederate position from the left, with the flag of the 5th Wisconsin Infantry Regiment occupying the center of the view next to the American flag. The flag of the 6th Maine Volunteer Infantry Regiment appears in the background near the left border. Confederate and Union troops fight at close range in the lower right foreground, with casualties from both armies sprawled across the field. Some Confederate soldiers are illustrated holding their ground against the charging Federals, but others flee in panic.

The Battle of Williamsburg

The Battle of Williamsburg took place on May 5, 1862 and was the first battle of the Peninsula Campaign. After the Confederates withdrew from Yorktown, Virginia, Union forces belatedly pursued the retreating army. The rearguard of the Confederate army, in an effort to delay the Union pursuit, occupied a defensive line near Williamsburg known as Fort Magruder. The Union vanguard engaged this Confederate force and fought an inconclusive battle that nonetheless gave the Confederate army time to retreat to Richmond. Both sides proclaimed victory. Union commander Major General George B. McClellan deemed the battle to be a 'brilliant victory', which the Northern press eagerly adopted. The Confederacy viewed the battle as a success since it allowed the bulk of their army fight another day.

This view was created and published by Kurz and Allison in 1893. We note a single example cataloged in OCLC, part of the collection at the Library of Congress.