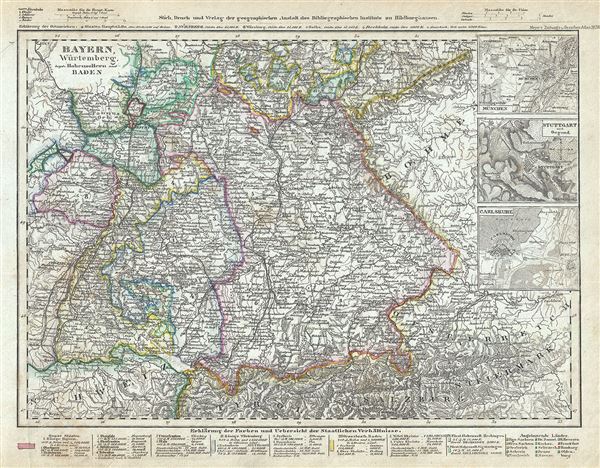 This is a beautiful map of southern Germany including Bavaria, Wurttemberg and Baden by Joseph Meyer. It covers Germany from Gotha south past the River Main (Mayne or Maine) as far as the Hornberg, depicting the semi-autonomous kingdoms, duchies and Prussian territories of southern Germany. These include Bavaria, Baden, Hohenzollern and Wurttemberg (Wirtemberg). Towns, rivers, mountains, railroads, and various other important topographical details are noted. Elevation throughout is rendered by hachure and political and territorial boundaries are outlined in color.

With the abolition of the Holy Roman Empire in 1806, Bavaria became the Kingdom of Bavaria. Its territories were doubled and it became the second largest Kingdom after the Kingdom of Prussia. The Congress of Vienna in 1815 created The German Confederation to coordinate the economies of these separate but culturally related German-speaking countries. The Confederation acted as a buffer zone between Austria and Prussia, the two largest and most powerful member states. It briefly dissolved during the Revolution of 1948, but was re-established in 1850. Nonetheless the rivalry between the two powerful states increased until it finally broke out into the Austro-Prussian War. Prussia won the Austro-Prussian War in 1866 which ultimately led to the collapse of the German Confederation. A few years later, in 1871, most of the former Confederation states were folded into the newly proclaimed German Empire.

This map was issued as plate no. 30 in Meyer's Zeitung Atlas. Although all the maps in this atlas are not individually dated, the title page and maps were often updated while the imprint with the date was not, causing confusion to the exact date for some of the maps. Moreover some maps in the atlas were taped in at a later date as an update to the atlas. We have dated the maps in this collection to the best of our ability.

Very good. Minor toning and some spotting at places. Minor verso repair at edges on top margin.
Looking for a high-resolution scan of this?