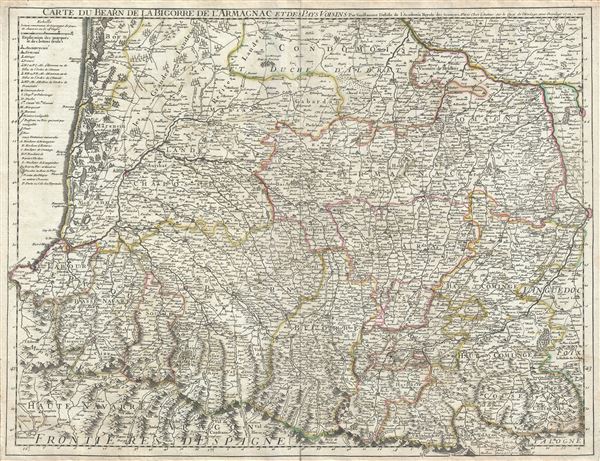 This is a fine example of the 1712 Guillaume De L'isle map of the Bearn, Bigorre and Armagnac regions of France. It covers the southwest portion of France from Bazas south to Canfranc in Spain and from Pamplona east as far as Toulouse and includes parts of the Aquitaine and Midi-Pyrenees regions (historically the Gascony region). The map renders the entire region in extraordinary detail offering both topographical and political information with forest and mountains, including the Pyrenees, beautifully rendered in profile.

The Gascony region is known for its remarkable cuisine and is the home to both Foie Gras and Armagnac, France's oldest brandy. Parts of the departments of Gers, Landes and Lot-et-Garonne forms what was the historic county of Armagnac. Gers is also known for its production of Floc de Gascogne, a sweet wine and for its wild mushrooms. It is also home to Cotes de Gascogne, a wine-growing district that produces white wine. Landes is known for its production of Chalossais, a white cow cheese with a gentle, acidic edge. Tursan wine is also distilled here. The Lot-et-Garonne region is where the production of Buzet wines and Cabecou d'Antan takes place. Cabecou d'Antan is a small round goat cheese with a fine, creamy texture. The Pilgrimage to Santiago de Compostella also passes through the northern part of this region. Toulouse, identified here, is the capital of the Haute-Garonne region. An important stop on the medieval pilgrimage route to Santiago de Compostella, the region is also known for its truffles, agriculture, distilled spirits, wines, and cheese. Madrian, part of the Hautes-Pyrenees department, is best known for producing a powerful red wine made from the Tannat grape. The region also makes a number of cheeses, including Tomme Noire des Pyrenees and Roquefort cheese. The city of Moissac, in the upper right quadrant of this map, located in the department of Tarn-et-Garonne, is known for its fine desert grapes. This area produces a number of quality wines, such as AOC Fronton, Cotes de Brulhois, and the Vins de Pays des Coteaux et Terrasses de Montauban. The region is also a historic stopping point on the Pilgrimage to Santiago de Compostella.

This map was created by Guillaume De L'isle in 1712.