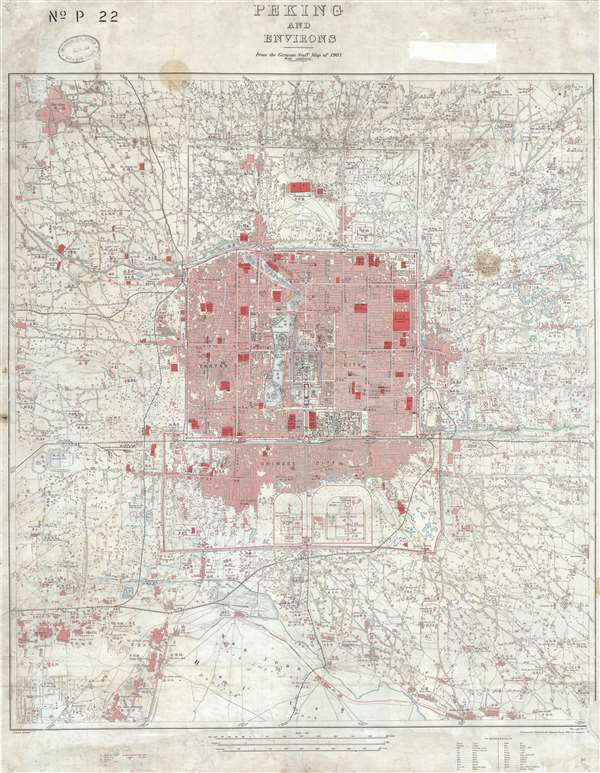 This is an extremely rare 1909 British map of Beijing or Peking China drawn prepared by the British Ordnance Survey Office Southampton for the War Office. Cartographically the map is based upon a 1907 German map published in Berlin entitled Peking und Umgebung. This map was created during the period of occupation following the suppression of the 1900 Boxer Rebellion by the Eight Nation Alliance (which included England, the United States, and Germany, among others). While the aftermath of the Boxer Rebellion was marked by rapacious looting and violent reprisals, it also produced detailed survey work, such as the present map, in anticipation of urban management needs and infrastructure development.

In the present example, Chinese characters have been added in manuscript for each English transliterated location name – more properly reflecting the German source map which, unlike the British edition, as here, had Chinese characters printed on the map. In addition, a note in the upper right identified 'Sig. G. F. Hampton, British Legation Guard, Peking China' as a former owner of the piece. A stamp in the upper left reads 'Commanding Royal Engineer, North China Command, No. P. 22.'

The only other example we have been able to isolate is in the British Library at S. Pancras. An exceptional rarity. Chart no. 2417.