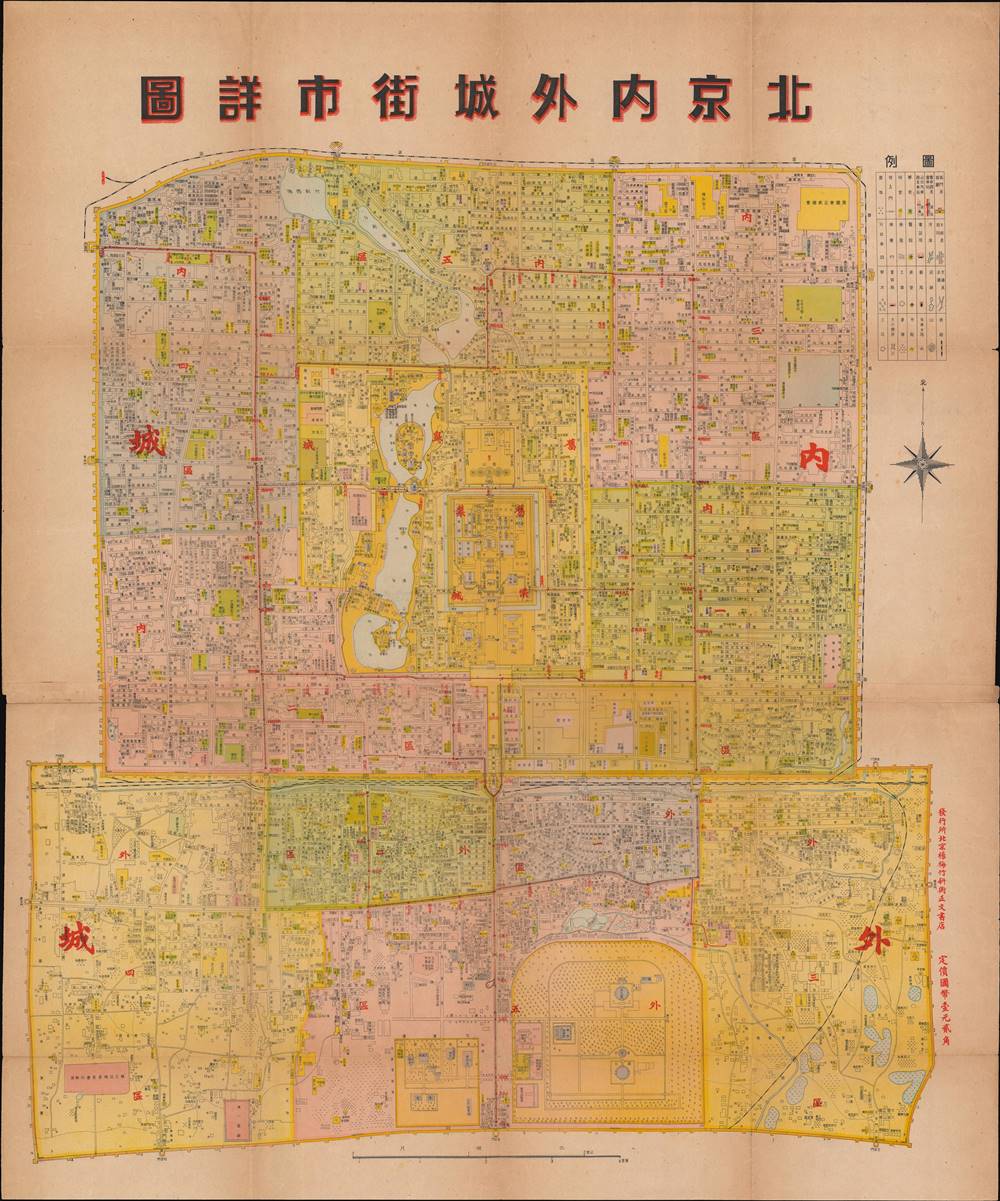 This is a detailed c. 1930 Chinese-issued map of Beijing, showing the city in the midst of its transition from imperial capital to modern city, fitted out with streetcars, plumbing, railway stations, and telegraphs.

This map is remarkably detailed down to the individual street and building level, including the interior grounds of landmarks like the Forbidden City and Temple of Heaven. It reflects the division of the city adopted after the fall of the Qing Dynasty, where the Inner City was separated into six districts and the Outer City into five. The map assiduously marks temples, pagodas, Christian churches, geographic features like waterways, government offices, transportation, and more. The makers have even gone through the effort of naming most of the individual hutong (alleyway neighborhoods). Although the walled city was the heart of Beijing, this map does not include the areas outside the city walls, which were also growing rapidly.

Beijing has gone through many name changes over its history, and as 'Dadu' was the capital of the Mongol Yuan Dynasty. It became Beijing (meaning 'northern capital') in 1403, when the Ming Emperor Yongle moved the capital from Nanjing ('southern capital') to be closer to the front line of the ongoing war with the Mongols. Under the Ming, Beijing began to take on its modern form, with the Forbidden City, and the city walls protecting and separating the inner and outer city. The Qing Dynasty elaborated the already-grandiose Ming city with palaces and parks.

Beijing initially remained the national capital after the fall of the imperial dynasty and the 1912 transition to a republic, although central power remained weak. The imperial family continued to live in the Forbidden City until 1924, even after several failed attempts to restore the monarchy, most notably in 1917. The city grew rapidly at this time and the municipal government was eager to add the trappings of modernity while maintaining the city's basic structure. Beijing suffered when the country was more-or-less united and the capital moved (back) to Nanjing by Chiang Kai-Shek in 1927-28, whereupon Beijing was renamed Beiping.

The Legation Quarter (southeast of the Forbidden City, about half-way between Zhengyang Gate 正陽門 and Chongwen Gate 崇文門) arose in the wake of the Second Opium War (1856 - 1860), when China was forced by Western powers to adopt a Western-style system of foreign embassies and diplomats. This quarter endured a weeks-long siege during the Boxer Uprising (1899 - 1901) but held out until relieved by the forces of the Eight Nation Alliance. In the following years, the entire area was rebuilt, and foreign garrisons (兵營) were added to the embassies. A railway station was added just outside Zhengyang Gate (marked here as 西車站). Another train station was added on the east side of the Zhengyang Gate in 1901 (京站, also known as the Zhengyangmen East Railway Station), which served as Beijing's primary station until 1959 (today it houses a railway museum).

The developing streetcar (電車) and bus (公共汽車) networks of Beijing are also evident. Schools, post offices, telegraph offices, hospitals, prisons, and water stations (自來水局) all proliferated in the 1920s - 30s, as municipal authorities tried to build a modern city on the edifice of the imperial capital. The city would go through additional expansion and changes in the following decades, most notably during the early years of the People's Republic era, when most of the city walls were torn down for the construction of the Beijing subway and the 2nd Ring Road, which follows the course of the city walls.

This map was published by the Zhengwen Bookstore (正文書店) on Yangmei Zhuxie Jie (楊梅竹斜街, to the southwest of Zhenyang Gate). Although not dated, this map includes Fu Jen University (北京輔仁大學, in the Fifth Inner District), opened 1925, and the streetcar line originating at Chongwen Gate, which was completed in 1930, so the map must date no earlier than then. At the same time, this map has not adopted the new nomenclature of Beiping, suggesting that the map was made soon after the name change. It is not held by any known institutional collections, this being the only known surviving example.

Bernhard, Roland. (2019). Martin Behaim of Nuremberg: the 'real discoverer of America'? German textbooks of the 18th to 21st centuries and the myth of the flat Earth. (Researchgate).
Looking for a high-resolution scan of this?