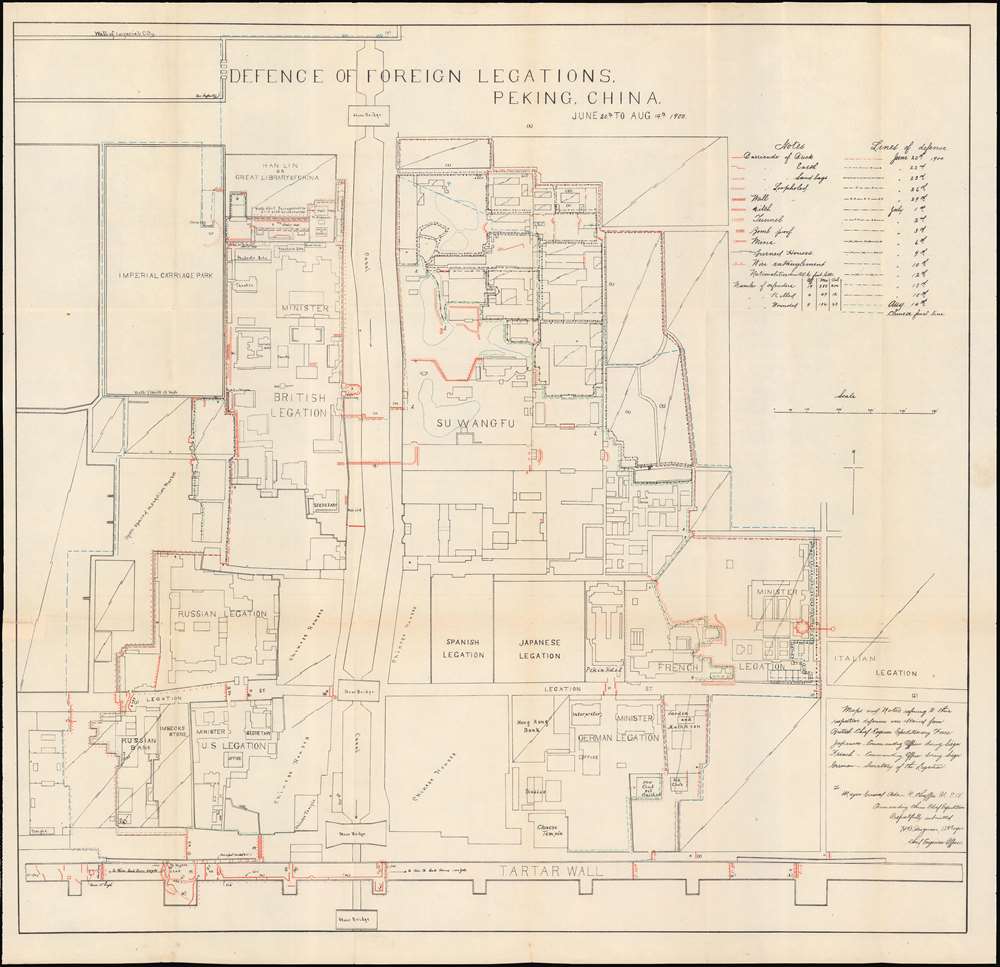 The defense of the Legation Quarter during the Boxer Rebellion.
$2,500.00

A rare 1901 map of the Legation Quarter (Dong Jiaomin Xiang / 東交民巷) of Peking or Beijing, China, laying out the defense of the Foreign Legations during the Boxer Rebellion. The map identifies the various legations: Spanish, Japanese, Russian, Italian, German, British, and United States, as well as Chinese residents and some commercial establishments. At the southern end of the map the Tartar Wall is identified; at the northern end, the wall of the Forbidden City. Produced from a map compiled by Harley Bascom 'Fergie' Ferguson (1875-1968), Chief Engineering Officer of the 1st Engineers Corps, the map has been further annotated in red and blue to show barricades, tunnels, ditches, walls, mines, burnt houses, bomb proof sites, and other lines of defense. Ferguson was sent to China with the China Relief Expedition of 1901, an eight-nation alliance conceived to rescue foreign nationals in the Legation Quarter.

The Beijing Legation Quarter was the symbolic focal point of foreign influence in China. Following the Opium Wars (1856 - 1860), the Qing government established the Legation Quarter to house foreign dignitaries and businesses. The Beijing Legation Quarter, located just southeast of the Forbidden City, was approximately 2 mi (3.2 km) long and 1 mi (1.6 km) wide. By 1900, the Legation Quarter was practically a miniature city, as this map shows, containing the legations, foreign and Chinese businesses, churches, schools, theaters, medical facilities, and more. In all, there were eleven legations located in the quarter: England, France, United States, Japan, Russia, Austria-Hungary, Germany, Italy, Netherlands, Belgium and Spain. Ethnic Chinese, most of whom were Christian converts, also owned businesses and homes scattered throughout the district. In total, in 1900, there were about 500 western and Japanese nationals residing in the quarter.

The Boxer Rebellion or Yihetuan Movement (1899 - 1901, 義和團運動) was an anti-foreign anti-imperialist uprising marked by proto-nationalism in northeastern China. The rebellion was largely a response to Christian missionary activity in China and was initially supported by the Qing Empress Dowager Cixi and her ministers who distrusted the radical and unpredictable peasant movement but sympathized with their goal of driving foreign influence out of China. In June of 1900, some 20,000 Boxers, convinced that their spiritual and martial prowess gave them immunity to foreign weapons, attacked the Chinese Christians and foreign nationals living in Beijing's Legation Quarter. Although terrible violence ensued, the Legation Quarter was able to mount a ragtag defense – which is outlined on this map. Relief came about a month and a half later in the form of the Eight-Nation Alliance China Relief Expedition, which, with an army of some 20,000, defeated the Boxers and occupied Beijing, as well as several other northern Chinese cities. The atrocities and looting that ensued, particularly at the hands of Russian and Japanese forces, are well documented and horrifying.

With telegraph lines cut, the defenders of the legations had no practical way to communicate with the outside world and no idea how long it would take for military aid to arrive. Instead, some 900 soldiers and about 2,000 Chinese Christians led by the British Minister Sir Claude MacDonald, set to establishing a defensive perimeter. New walls were constructed at strategic choke points and old defensive works were shored up. The British Legation, being the largest and most defensible, formed the core of the Quarter's defense. American and German forces were assigned to the aging Tarter Wall, the primary line of defense, while the French, Italian, and Japanese took positions in the north-western part of the Quarter.

The Chinese Boxer army, rather than using their overwhelming numbers to push through the Legation's defense, instead focused on artillery, sniper volleys, and occasional probing charges. Recognizing the strong defense, on June 23, the Boxers attempted to burn out the Legation Quarter with a series of fires along the perimeter. The blazes soon got out of control and backfired on the Boxers, destroying many of the wooden Chinese structures surrounding the quarter, as well as the National Library of China (appearing top center), a loss comparable to the burning of the Great Library of Alexandria. At the same time, the fires had little effect on the stone and masonry structures of the Legations. The ultimate result was the creation of large open buffer zones around the Legation Quarter, making it even more defensible.

This map is a print version of a manuscript plan prepared by Harley Bascom Ferguson following the events of the Boxer Rebellion. The original manuscript copy of this plan has unfortunately not survived, but we have been fortunate enough to come into possession of an example of the cyanotype (blueprint) first edition that was issued in 1900 and bears manuscript notations by Ferguson himself. The present offering was published in the official U.S. government report on the incident. Although dated 1900, it was issued in 1901. A reduced version of this map was later published in Arthur H. Smith's two volume report, China in Convulsion.

Harley Bascom 'Fergie' Ferguson (August 14, 1875 - August 29, 1968) was an American army officer and engineer active in the late 19th and first half of the 20th century. Ferguson was born in Waynesville, North Carolina, the fourth of seven children. He studied at the U.S. Military Academy at West Point, graduating in 1897. During the Spanish-American War, Ferguson served as a Lieutenant in Santiago, Cuba (1898) and in the Philippines (1899). In 1900, he was sent to Beijing as the Chief Engineer to the China Relief Expedition, a multinational emergency relief effort mustered to suppress the Boxer Rebellion. There he produced the definitive map of the Rebellion and the Defense of the Legation Quarter. From 1910 to 1912, he assisted in raising the U.S.S. Maine in Havana, Cuba. Afterwards he was assigned to various engineering projects in the United States. At the outbreak of World War I, he was sent to France to command the 105th Engineers, 30th Division, American Expeditionary Force. Later in the war he served as the commanding officer of the Port of Debarkation at Newport News, Virginia. Following World War I, he was assigned to various engineering posts related to American waterways. He retired in 1939 as a Major General. A few years later in 1942, he was recalled to duty for World War II, serving, due to advanced age, in command advisory capacity. After retirement, he enjoyed the remainder of this days in Lafayette, Louisiana, where he died at the age of 93. Ferguson’s papers are preserved at the University of North Carolina. Learn More...