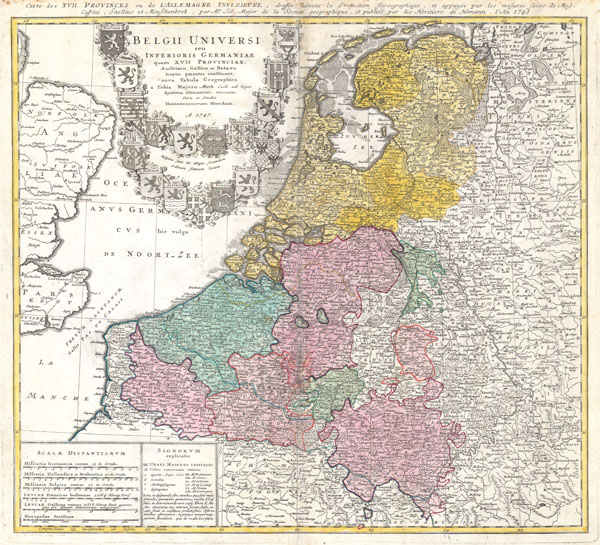 A beautifully detailed 1747 Homann Heirs map of Belgium and the Netherlands (Holland). Includes Belgilum proper as well as the seven states of the Belgian Federation – what is today Holland or the Netherlands. Also includes parts of England and extends into eastern Germany past the Rhine River. Title elaborate cartouche in the upper left quadrant, filling the North Sea, features the armorial shields of the Belgian Counties as well as those of the seven states of the federation: Geldern, Holland, Zeeland, Utrecht, Friesland, Ober Issel, and Groningen. Alternate title in French outside of upper margin. This map was drawn by Johann Tobias Mayer for inclusion the 1752 Homann Heirs Maior Atlas Scholasticus ex Triginta Sex Generalibus et Specialibus…. Most early Homann atlases were 'made to order' or compiled of individual maps at the request of the buyer. However, this rare atlas, composed of 37 maps and charts, was issued as a 'suggested collection' of essential Homann Heirs maps.

Very Good condition. Discoloration along upper part of original centerfold. Somemarginal foxing, especially along upper margin. Else clean. Blank on verso.
Looking for a high-resolution scan of this?