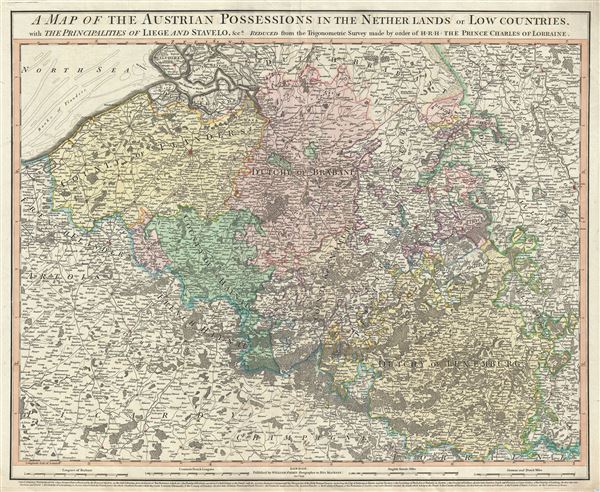 This is an attractive 1789 map of Belgium and Luxemburg by William Faden. The map covers present day Belgium and Luxemburg along with adjacent parts of France and Germany. The map extends from Breda, south as far as Montmedy and from Dunkirk east as to Cologne. The Duchy of Luxemburg is illustrated with exceptional and uncommon detail. When Faden prepared this map, much of this region was dominated by the Hapsburgs of Austria.

The Low Countries were on the low-lying delta formed by the convergence of the Rhine, Scheldt, and Meuse rivers. This portion of the Netherlands was known successively as the Habsburg Netherlands, the Spanish Netherlands, and finally Austrian Netherlands until, in 1795, Napoleonic forces invaded and set up a new French client state, the Batavian Republic. The Low Countries, until 1581 part of the Seventeen United Provinces, were reunited by the 1815 Congress of Vienna as the United Kingdom of the Netherlands. The United Provinces hosted the world's first stock exchanges, and is considered the birthplace of the modern capitalist economy.

This map was based on the trigonometric survey made by order of His Royal Highness, Prince Charles of Lorraine and was published by William Faden, Geographer to His Majesty, in 1789