1817 Thomson Map of Belgium and Luxemboug 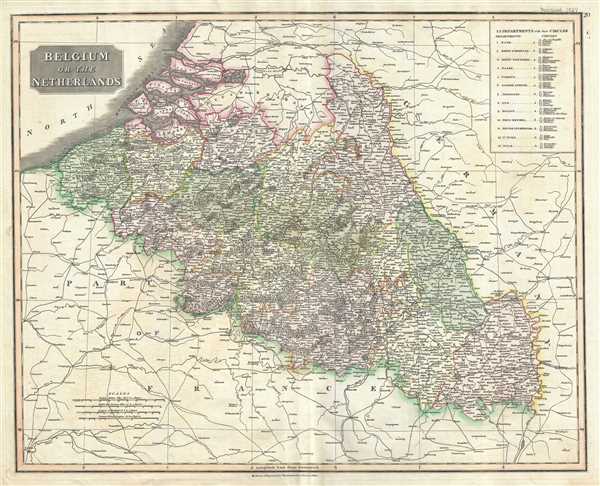 1817 Thomson Map of Belgium and Luxemboug

Beautiful map of Belgium and Netherlands depicting the Departments of the First French Republic.
$200.00

This is a beautiful 1817 map of Belgium and Luxembourg by the Edinburgh cartographer John Thomson. The title ‘The Netherlands’ refers to the old name for Belgium, also called Royal Netherlands and Catholic Netherlands. Covers the region from Dutch Flanders to Germany. This highly detailed map notes several cities, rivers, roads and other physical and political features. Forests are beautifully rendered in profile. An index in the top right quadrant lists the 13 departments of the First French Republic color-coded in the map.

In 1830 Belgian Revolution would create the modern Belgian state. Luxembourg would be considered a province of the new Belgian state. The Netherlands however, would refuse to recognize the new country of Belgium until the 1839 Treaty of London. This Treaty would also grant Luxembourg the status of Grand Duchy, while its western portion would be ceded to Belgium as a province. In 1842, the Grand Duchy of Luxembourg would become part of the German Customs Union.