1831 Burr Map of Holland (The Netherlands), Belgium and Luxemburg 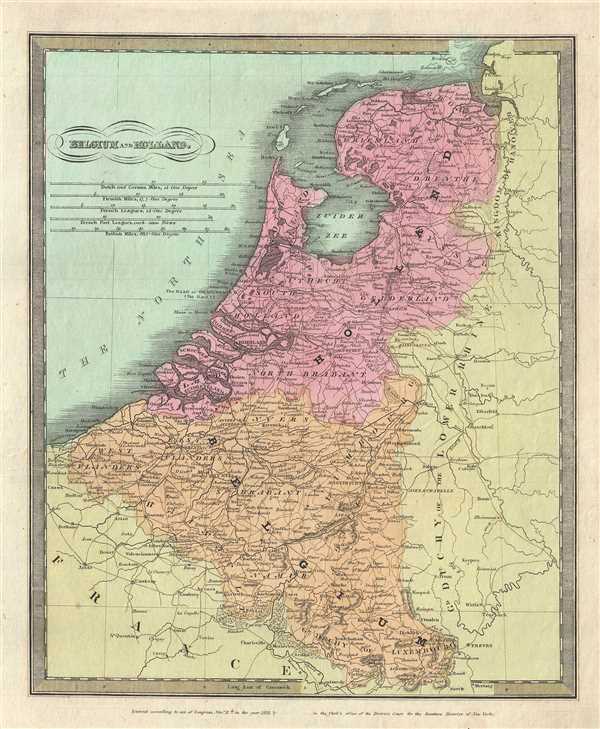 1831 Burr Map of Holland (The Netherlands), Belgium and Luxemburg

This is an example of David H. Burr’s 1831 first edition map of Holland (the Netherlands), Belgium and Luxemburg. It covers from the North Sea to Luxembourg. Towns, rivers, mountains, canals and various other important topographical details are noted. Elevation throughout is rendered by hachure and political and regional territories are color coded.

Just a year before the publication of this map, the 1830 Belgian Revolution would create the modern Belgian state. Luxembourg would be considered a province of the new Belgian state. The Netherlands however, would refuse to recognize the new country of Belgium until the 1839 Treaty of London. This Treaty would also grant Luxembourg the status of Grand Duchy, while its western portion would be ceded to Belgium as a province. In 1842, the Grand Duchy of Luxembourg would become part of the German Customs Union.

According to Ristow, although Burr is credited on the title page, he left this atlas incomplete. He was appointed as topographer to the U.S. Post Office, and of the sixty-three maps finally included in this atlas, only completed eight. The rest of the maps were then completed by Illman and Pilbrow in Burr's style. This map was ‘Entered according to act of Congress in the year 1831 by David H. Burr in the Clerk’s office of the District Court for the Southern District of New York’, but was not published until the atlas was released in 1835. Published by D. S. Stone in Burr’s New Universal Atlas.