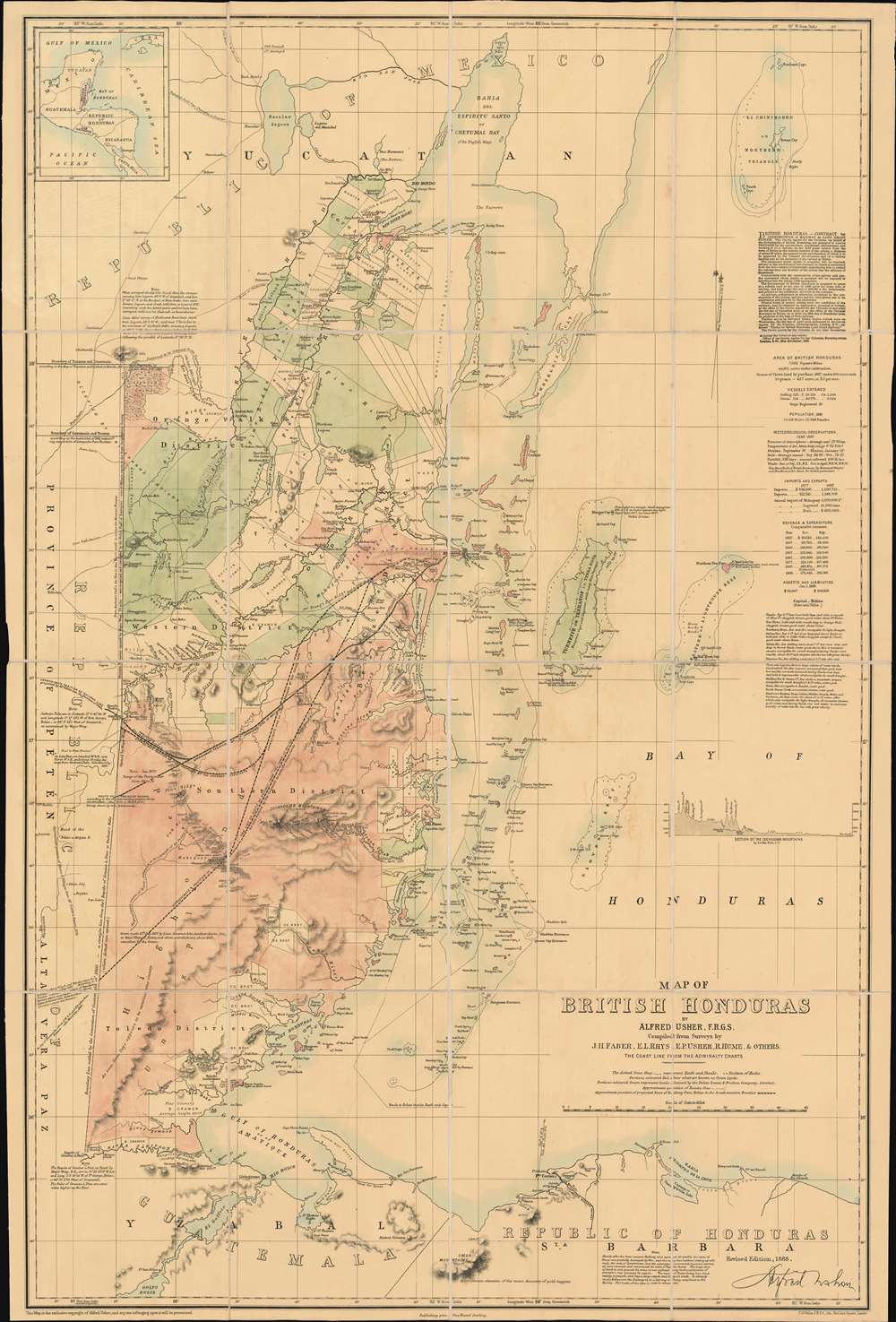 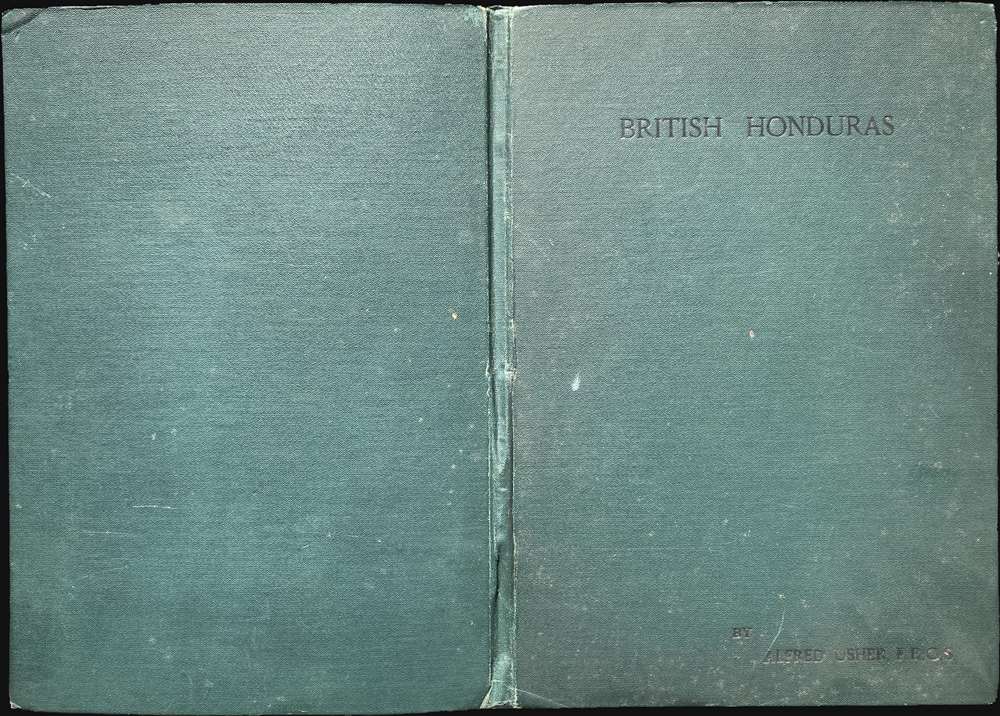 Where to dig for buried pirate treasure!

A remarkable large-scale 1888 map of Belize, then British Honduras, developed to solicit railroad developers to bid on rights to construct a line from Belize City to Guatemala City. The map draws on a combination of Admiralty surveys, reports from survey expeditions, and specific grant surveys conducted both privately and by the Crown. The whole gives the impression of a well-organized country, with friendly terrain, rich with resources - an impression that belies the rugged jungle, swamps, and mountains. Text in the upper right lays out the Crown Colony's generous terms for potential railroad developers. If that's not enough to draw settlers and investors - there is 'pirates buried treasure' on Turneffe Atoll.

In the second half of the 19th century, power in British Honduras was increasingly falling into the hands of powerful lumbering conglomerates based in London. These conglomerates controlled trade, access to ports, and much of the most valuable land. The old settler families, among them Ushers, were declining in power and influence. They saw a railroad, which would increase their trade possibilities considerably by opening access to free Pacific ports, as a way to reverse their fortunes.

This map illustrates the projected routes of several proposed railroads - all of which were available at the time for developers to bid on. Text in the upper right lays out the proposed contract,

Contract for construction of railways on Land Grant System. The Crown Agents for the Colonies, on behalf of the Government of British Honduras, are prepared to receive Tenders for construction, equipment, maintenance, and working of (1) A railway on the land grant system from the town of Belize to the western frontier of the colony a distance of about 90 miles, the general route and direction of which is to be approved by the Colonial Government; and (2) a railway landing pier at the terminus of the railway at Belize. …

The contractor whose tender is accepted, will be required, subject to the conditions of the contract, to obtain a concession from the Government of Guatemala, empowering him to extend the railway form the frontier of the colony into the territory of Guatemala.

The promotion goes on to offer generous terms, including land grants, subsidies, and a sum of £60,000. Nonetheless, this was not sufficient to draw contractors and the dreamed-of railroad never appeared.

It was not until 1907 that the first railroad appeared in British Honduras, the Stann Creek Railway. Construction began in 1907 and continued until 1914. The railroad, a narrow-gauge line, eventually extended 25 miles, from Commerce Bight (a deep-water seaport later destroyed by a hurricane) to Middlesex. The Stann Creek Railway was important in building banana and other agricultural enterprises in the Stann Creek Valley, but did little to further the general trade interests of the colony.

If the railroad concessions, cheap grants, rich forests, and tropical weather were not enough to draw treasure seekers, Usher includes notes about pirate treasure on Turneffe Atoll. The coast of Belize was a well-known pirate haunt in the early 17th century, associated with legendary pirates Edward 'Blackbeard' Teach, Israel Hands, and Peter Wallace, among many others. The reference to treasure on Turneffe Atoll is curious. While the cartographer here maps it as an island, it is more appropriately described textually on the map as a network of 'Mangrove Cays and lagoons, with many boat passages.' As early as 1868 treasure hunters flocked to the island. A letter cataloged in the Archives of British Honduras dated July 6th, 1867, notes,

S. Cockburn to Lieutenant Governor Pointing out the arrival in the Colony of two American adventurers in search of hidden treasure, the place of which has been disclosed to them by the last of the pirates concerned with it before he expired. The place (on Turneffe) has been discovered but no success gained in recovering the treasure. The Americans have left for the States, better to equip and prepare themselves for carrying out the excavations, local persons who had advanced money on the venture not being prepared to risk more. Suggests that the Government authorize him to proceed to Turneffe to reconnoiter and if appearance confirm the report, then to take measures to discover and secure the treasure.

Although Turneffe fits all of the criteria of a pirate haven, with narrow hidden ship passages and toponymy like 'Deadman's Caye', we have found no record of actual pirate treasuring being unearthed there.

This map was compiled by the British/Belizean surveyor Alfred Usher. It is based upon admiralty charts and the surveys of J. H. Faber, E. L. Rhys, R. Hume, and Usher's brother, the Assistant Crown Surveyor, Edward Potts Usher (1824 - 1868). It was engraved in London to solicit railroad contractors by Francis Sidney Weller (April 1849 - 1910). This is the second edition, published in 1888, revised and updated over an earlier edition of 1881. We are also aware of a third edition produced in 1891. Of the first edition, we have identified no surviving examples. The second edition, as seen here, is cataloged in five institutional collections, but has no market history. Rare.

Alfred Usher (1836 - August 6, 1906) was a British land surveyor and cartographer active in Belize, in the mid to late 19th century. Usher was born in Belize, at the time British Honduras. The Usher family had a long history in British Honduras, being present from at least 1786 and part of the old settler elite. Alfred Usher's father, John Usher was born on St. Georges's Caye (April 15, 1793). Alfred was involved with attempts to build a railroad from Belize City to Guatemala City. Later helped to establish Birchington Township, a plan real-estate development on the Southern Lagoon near Gales Point. Nothing remains of this development, so we assume it was a failure despite aggressive promotions in prominent North American newspapers. He was a fellow of the Royal Geographical Society. His brother, Edward Potts Usher (1824 - 1868) was the Assistant Crown Surveyor for British Honduras. Learn More...


Francis Sidney Weller (April 1849 - 1910) was an English engraver, lithographer, map publisher, and cartographer based in London. He was the son of Edward Weller (July 1, 1819 - 1884) and is named after another important map publisher, Sidney Hall. F. S. Weller took over his father's printing business in 1884. This is the same business that was founded by John Thomson, passed to Sidney Hall, who managed it from 1814 to 1831, then to his widow Selina Price Hall, who ran it to 1853, when it was taken over by his nephew Edward Weller, who rat it until 1884. Weller passed it to his son, Frances Sidney Weller. Learn More...