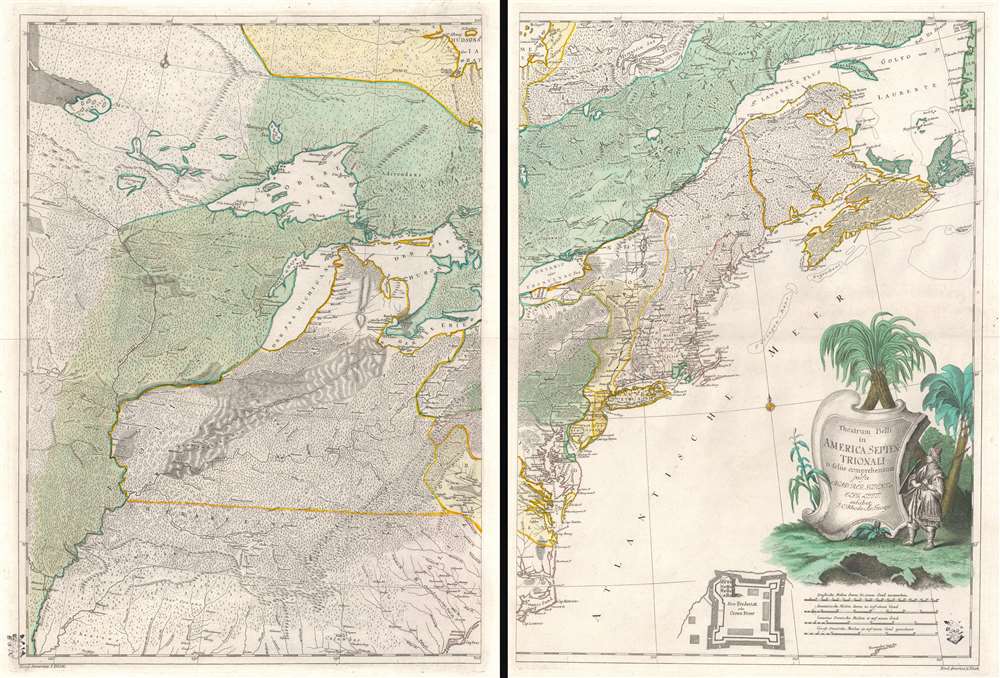 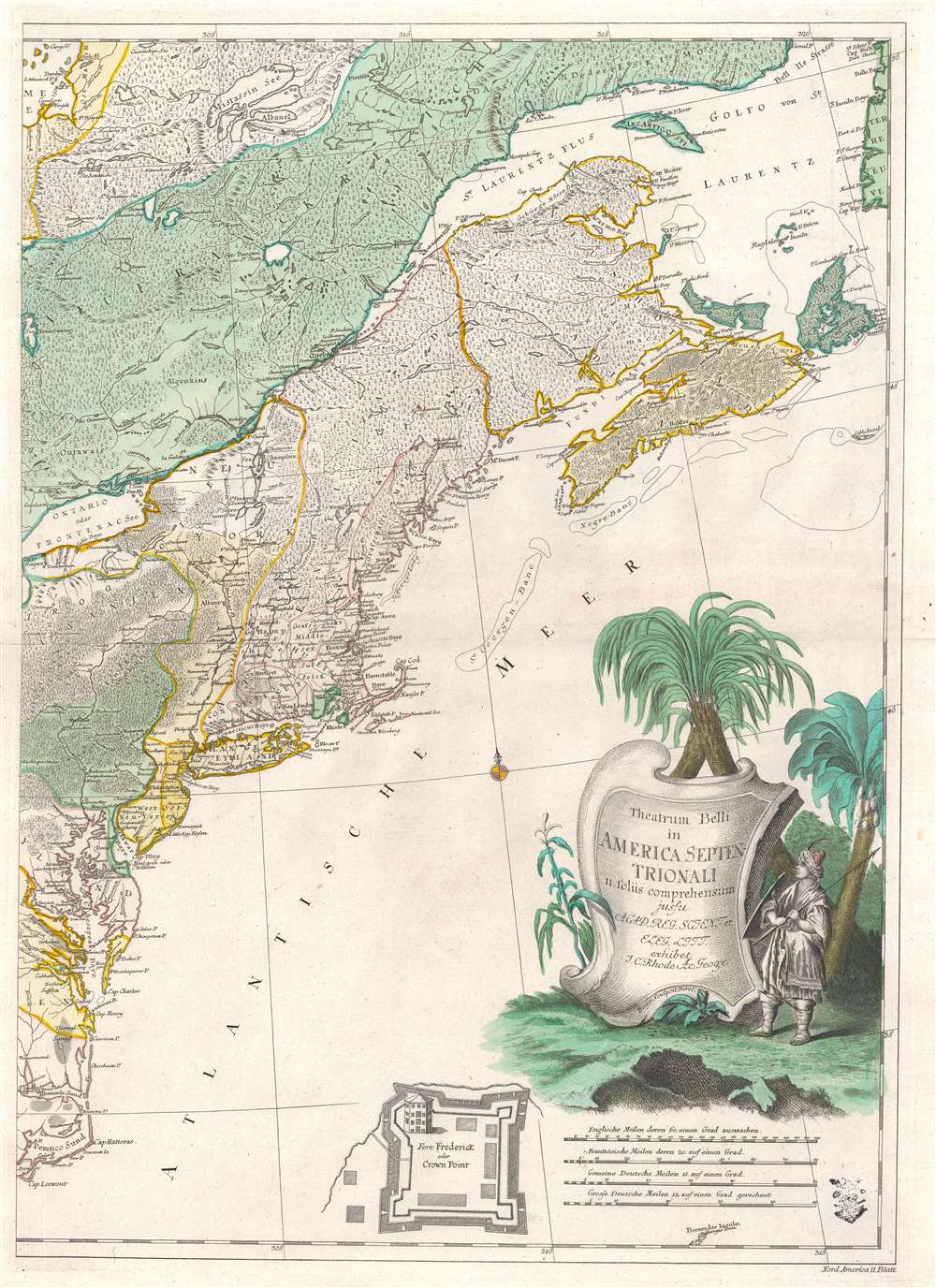 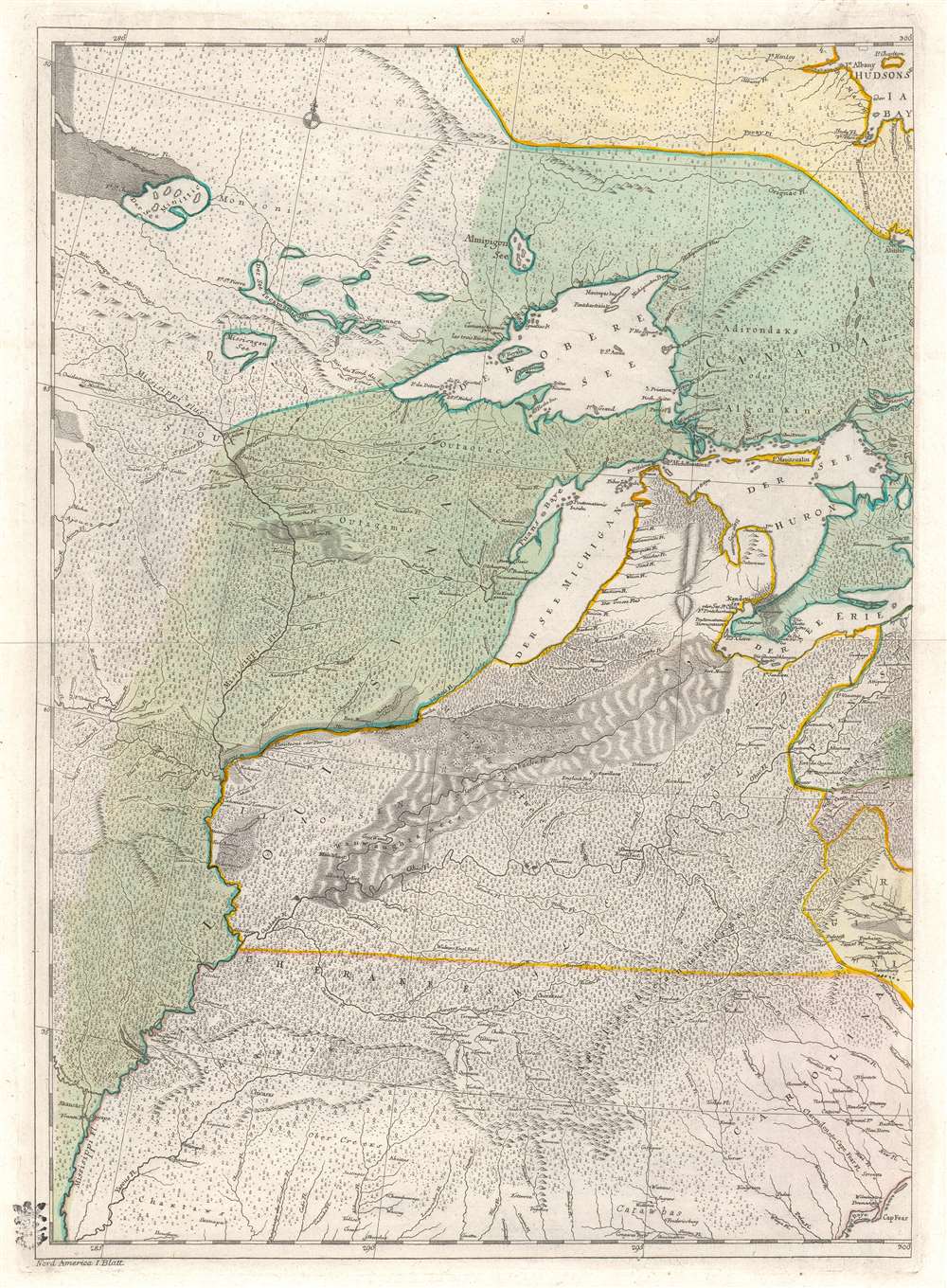 One of the most extraordinary, yet little-known, misunderstood, and under appreciated, maps of America.
$14,000.00

A rare and important separately issued c. 1761 map of eastern North America published in Berlin during the French and Indian War (1754 - 1763). This map is one of the most extraordinary, yet little-known, misunderstood, and under-appreciated, maps of colonial America ever published. The map, prepared by the German cartographer Johann Christoph Rhode (1713 - 1786) is a masterpiece of execution. It covers the northeastern part of the United States and Eastern Canada from the Mississippi Valley to the Atlantic Seaboard and from, roughly, Cape Fear to the Hudson Bay, inclusive of all five Great Lakes and the British Colonies.

An Exceptional and Obscure Piece of History

The obscurity of Rhode's map is surprising as it is unquestionably the most exceptional map of the Theater of the French and Indian War published in any country other than the belligerent nations. As such, Rhode’s map occupies a unique niche in its neutrality, attempting neither to support nor deny either French or British claims. Linguistically the map is a curious amalgam of Latin, French, and English with a few American Indian terms thrown in for good measure.

Since this is essentially a map of the theater of the French and Indian War, we will start our study in the Ohio Valley. Lloyd Brown, in his Early Maps of the Ohio Valley, praises the cartographer's the treatment of the Ohio Valley correctly recognizing that it predates both the Mitchell and Evans maps. As Brown notes, this is

one of the earliest attempts to indicate the topography of the Ohio Valley and the surrounding country as well as the dense forests and mountain ranges. The use of fine shading and hachures to indicate relief is unusual for the period.

Kershaw and others have mistakenly described this map as a German edition of the Mitchell map, but any even cursory comparison shows the error of this assumption. Rhode clearly had other sources, but we can only surmise, in a few specific cases, what those were. For example, the Great Lakes are plainly derived from Jean Baptiste Bourguignon d'Anville's map of 1746. This is evident in the angular and rugged definition of Lake Superior, Lake Michigan's distinct southwesterly axis, and lean presentations of Huron, Erie, and Ontario. Neither do we see any references to Mitchell's cartography in the presentation of the lakes and rivers in the Transmississippi. Rhode does, however, follow Mitchell in using the Illinois River as a territorial barrier and with regard to the convoluted course of the Ohio River.

One of this map's most striking qualities is its use of countless tiny individually engraved trees to distinguish between the densely forested parts of America and those 'tamed' colonial regions heavily populated by European diaspora. Also take note of the Wabash and Illinois valleys where the engraver has employed sophisticated hachuring to illustrate a marshy savanna. Indeed, the whole map is lavishly engraved on a scale one would be hard pressed to find in any other map of the period. This is far from mere happenstance. This map was engraved as part of Frederick the Great's agenda to modernize Prussia. Frederick strongly supported German cartographic initiatives and pushed for deeper penetration of map study in German military academies. It was under Frederick's reign that Berlin became an important center of German enlightenment, and was home to publishing houses, arts centers, and academies. The Prussian Royal Academy of Sciences, of which Rhode was the official Geographer, in particular received lavish support from Frederick II's government in the form of a monopoly on map production. This map would have been intended as an exemplar of Prussian mastery of the cartographic sciences, and as such all examples bear the Prussian levy stamp at the bottom corners of each sheet.

There are two known states of this map, the present example being the second. The first state was published in 1755 and does not feature the inset of Lake Champlain's Fort Frederick (Fort Saint-Frederic) or Crown Point. This inset was added shortly after the 1759 British capture of Fort Frederick and its subsequent rebranding as Crown Point. The inset itself follows a similar inset on Le Rouge’s 1755 Recueil des Plans del’Amerique Septentrionale. It was spectacularly engraved by Friedrich Gottlieb Berger. This map was most likely intended for publication in a 'Grand Atlas' but no such work ever materialized and this was never systematically included in any atlas at the point of publication. All known examples are therefore separate issues. Two examples are cataloged in OCLC and are part of the institutional collections at the University of Michigan and the Bibliothèque nationale et universitaire in Strasbourg, France. A third known example is part of the collection at the Library of Congress.

Johann Christoph Rhode (1713 - 1786) was a German cartographer active in the middle part of the 18th century. Rhode was a student of Leonhard Euler with whom he worked under the auspices of the Prussian Royal Academy of Sciences (Konigliche Akademie der Wissenschaften). There, in 1752, he was appointed resident geographer, where he was assigned to create a detailed German post-route map. He produced several other maps in conjunction with the Academy, most of which focused on Prussian Territories. The exceptions are a map of the North Pole (1753), this map of the Theater of the French and Indian War (1755), and Asia Minor in Antiquity (1780). Rhode's works were intended to be exemplars of Prussian cartography under the patronage of Frederick II (the Great) and were often lavishly engraved. His most important map is most likely Theatrum belli in America Septentrionali although his Neuer Geometrischer Plan der Gesammten Koniglich-Preussischen … Berlin is also similarly extravagant. Learn More...


Friedrich Gottlieb Berger (1713 - c. 1797), was a German engraver active in Berlin in the middle part of the 18th century. Little is known of his career, but his work in cartography seems limited to a few maps by Johann Chrisoph Rhode and the Prussian Royal Academy of Sciences. His non-cartographic corpus consists of numerous general engravings and bookplates. Berger was survived by his son, Gottfried Daniel Berger (October 25, 1744 - November 17, 1825), also an engraver. Learn More...