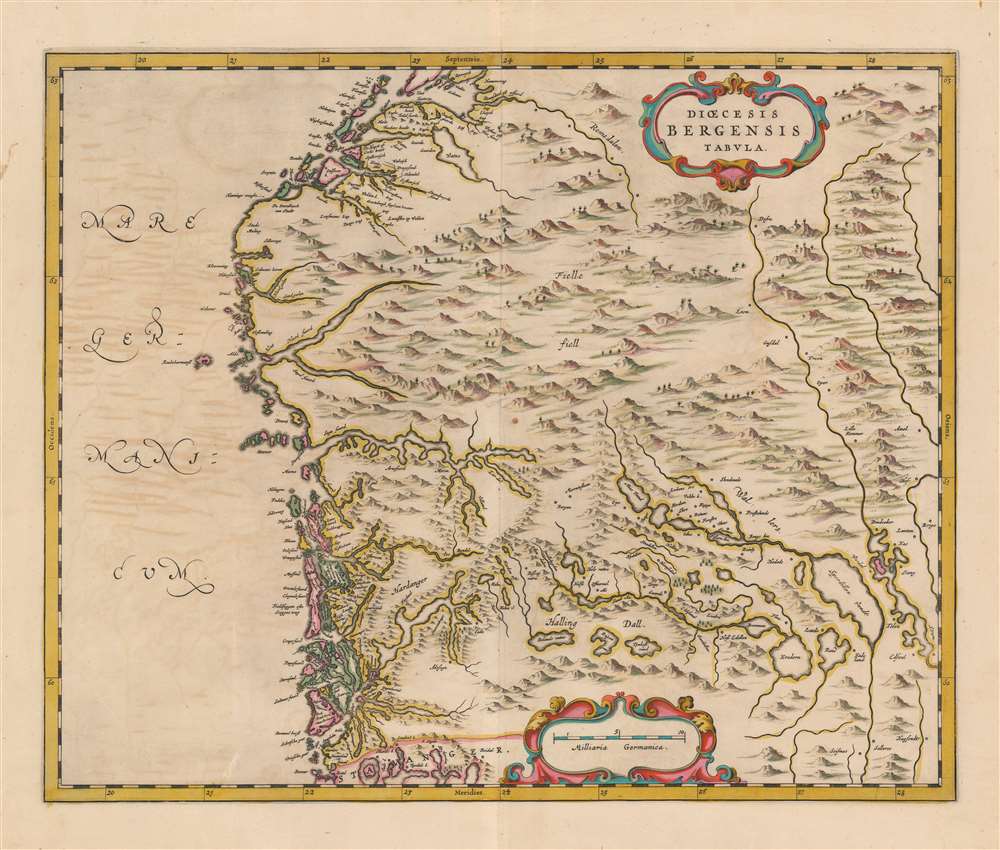 This is a beautiful example of the 1659 proof state of Joan Blaeu's map of the Diocese of Bergen, Norway - encompassing the newly-formed county of Vestland. It is among the scarcest of Blaeu's maps, appearing in a sole edition of the Novuus Atlas and subsequently in the Atlas Maior. Engraved at the height of Blaeu's career, with superbly executed pictorial mountains evoking the mountainous terrain of Norway's fjord country

Leading up to the production of Blaeu's Atlas Maior, the mapmaker sought to improve his coverage of Norway with seven, detailed, regional maps, including this one. These made their first appearance in the 1659 Spanish Nuevo Atlas. Blaeu's map covers the west coast from Stavanger in the south to the Romsdalen valley in the north. From Hardanger Fjord, the map's detail extends eastward along the Hallingsdalselva (here named variously Quidlebygden and Sund Aa and ending in the lake Krøderen (whose location is largely correct although its shape is not remotely so). The Fjord lakes throughout were not understood in detail by the cartographer, but the interposition of many such lakes and streams between coastal Norway and the Stange Municipality ('Stang' is shown and named) is generally correct. Cartographically, the advance represented by this map and its six sisters was one of scale, rather than detail: While no atlas maps prior to these had focused as narrowly on these parts of Norway, the detail presented appears - in large part - to be drawn from the famous 1626 map of Anders Bure, which Dutch cartographers including Blaeu had already been reproducing in smaller format.

This is an example of the first of two states of this map identified by Ginsberg, which only appeared in the 1659 Spanish edition of the Blaeu Novuus Atlas. The second state - distinguished only by the presence of ships in the water areas - appeared in the five editions of the Atlas Maior. Three examples of the complete Nuevo atlas o Teatro del mundo are catalogued in OCLC. Six listings of the separate map in later issues appear. Only one example of the 1659 issue of the separate map is listed in an institutional collection, that of the Biblioteca Nacional de España.

Blaeu, J., Nuevo Atlas, (Amsterdam) 1659.     The classic Dutch atlas, whose publication ushered in the Dutch golden age of cartography. Willem Jansz Blaeu had been, since 1604, producing engraved maps for sale; these were separate issues (and all consequently extremely rare) until the publishing of Blaeu's Appendix in 1630 and 1631, which also included a number of maps purchased from the widow of Jodocus Hondius, (for example his famous iteration of John Smith's map of Virginia.) In 1634, he announced his intention to produce a new world atlas in two volumes, entitled Theatrum Orbis Terrarum, sive Atlas Novus (in an effort to invoke the successful work of the same title produced by Ortelius the previous century, while reinforcing the notion of it being a new work.) This work was published first in German in 1634, followed by Latin, Dutch and French editions in 1635. Blaeu's maps have always been noted for the quality of their paper, engraving and fine coloring, and this was the intent from the very start. The 1634 announcement of the upcoming work described it: 'All editions on very fine paper, completely renewed with newly engraved copperplates and new, comprehensive descriptions.' (van der Krogt, p,43) Many of the most beautiful and desirable maps available to the modern collector were printed and bound in Blaeu's atlases. Willem's son, Joan, would go on to add further volumes to the Atlas Novus, concurrently printing new editions of the first two volumes with additional maps, in effect making these new editions an entirely new book. Under Joan there would be nine Latin editions, twelve French, at least seven Dutch, and two German. This exceedingly successful work would be the mainstay of the Blaeu firm until 1661, at which point the work was supplanted by Joan Blaeu's masterwork Atlas Maior in 1662.

Excellent. Some light offsetting, else fine with superb original color.