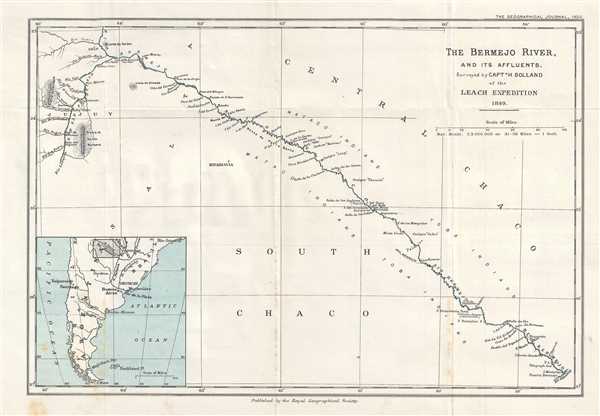 An early map of the Bermejo River by Captain Henry Bolland - an expert on the navigation of South American rivers.
$250.00

This is an 1899 Captain Henry Bolland map of the Bermejo River and its tributaries in Argentina. The map depicts the river from its confluence with the San Francisco River (Rio San Francisco) to its confluence with the Paraguay River (Rio Paraguay). Perhaps the first printed survey of the Bermejo River, numerous locations along its banks are labeled, along with several tributaries and a handful of mountains and an inset map in the lower left corner situates the Bermejo River in relation to other locations in South America. The expedition was mounted and financed by Messrs. Walter and Stephen Leach, who owned a sugar factory in the Jujuy province of the Argentine Republic. The Leach Brothers wanted to know if it would be possible to send their goods by river, which would be cheaper than the nearly 1,000-mile rail journey they currently used to ship their product to market. Captain Bolland was a member of the expedition and an expert in the navigation of South American rivers. A member of the British Merchantile Marine, Bolland would be commissioned by the Bolivian government the following year to survey the Paraguay River and discover a location for establishing a port.

This map was created by Captain Henry Bolland in 1899 and printed by the Royal Geographical Society in 1900.