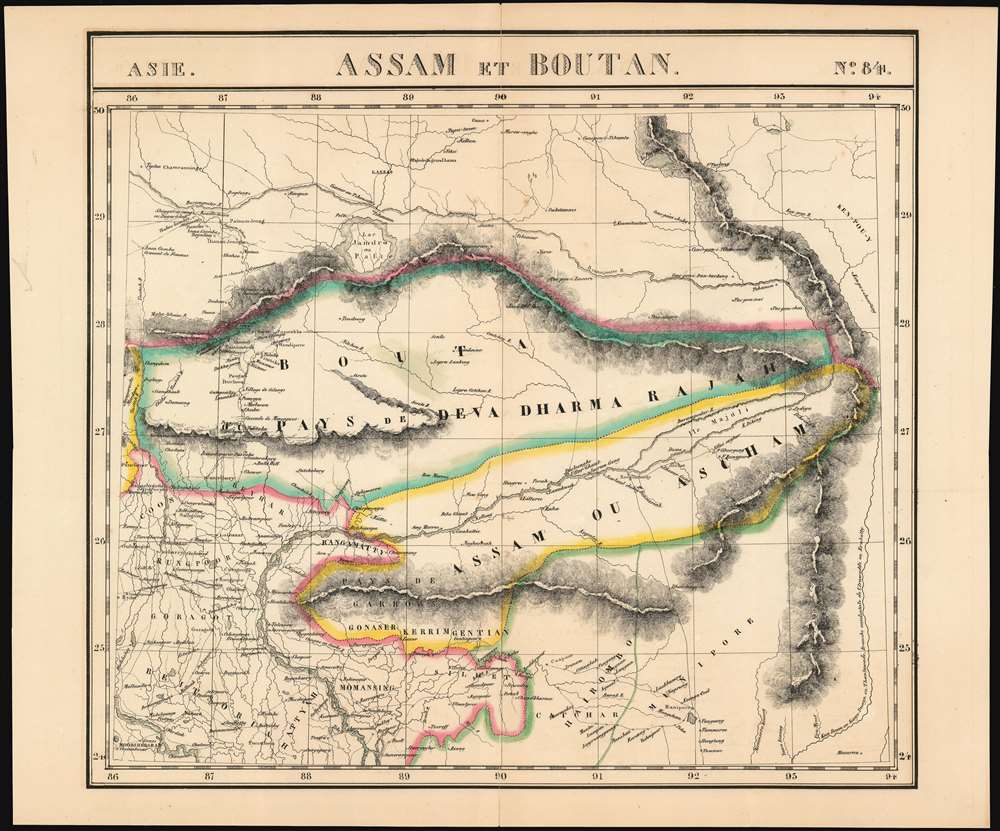 This 1827 Vandermaelen map of Bhutan, Assam and Tibet is one of the earliest printed maps to show this region in detail, and the first to do so in lithograph. Vandermaelen's atlas was also remarkable in adhering to a uniform scale and projection for every map: In doing so, Vandermaelen committed himself to showing Bhutan in sharper focus than any map previously published - inadvertently revealing how little was actually known of the region at the time, beyond the string of cities and fortresses in the western part of the country. (The wealth of detail across the border in India is striking in comparison). Vandermaelen names it 'Boutan ou Pays de Deva Dharma Rajah,' referring to the Buddhist religious leadership of the time. Punakha, the ancient capital of Bhutan is shown. Both within Bhutan and across the border into Tibet, there can be found dzongs - Bhutanese fortresses built in the 17th century to defend against Tibetan invasion. The map also shows part of southern Tibet in similar detail. Lhasa (Lassa on the map) appears, with the 'Pagode du grand Lama,' shown to the east-north-east. Several fortresses are marked - Painom Jeung, Ihansu Jeung, and Anea Gomba, which is noted to be a convent. Yamdrok Lake (here named La Jamdro ou Palte) is shown as well: this is one of three sacred Tibetan lakes.

Vandermaelen’s atlas was the first to be executed with lithography, and proved to be both well-produced and costly. As a result, the map presents elegantly, with paper free of toning, a sharp printed image, and bright original hand coloring. Mountains are shown in hachure, though the actual topography was not yet well understood.

Vandermaelen's atlas appears in 19 institutional collections; this map does not appear in any physical copies in OCLC. There was only one edition of Vandermaelen's 1827 work.