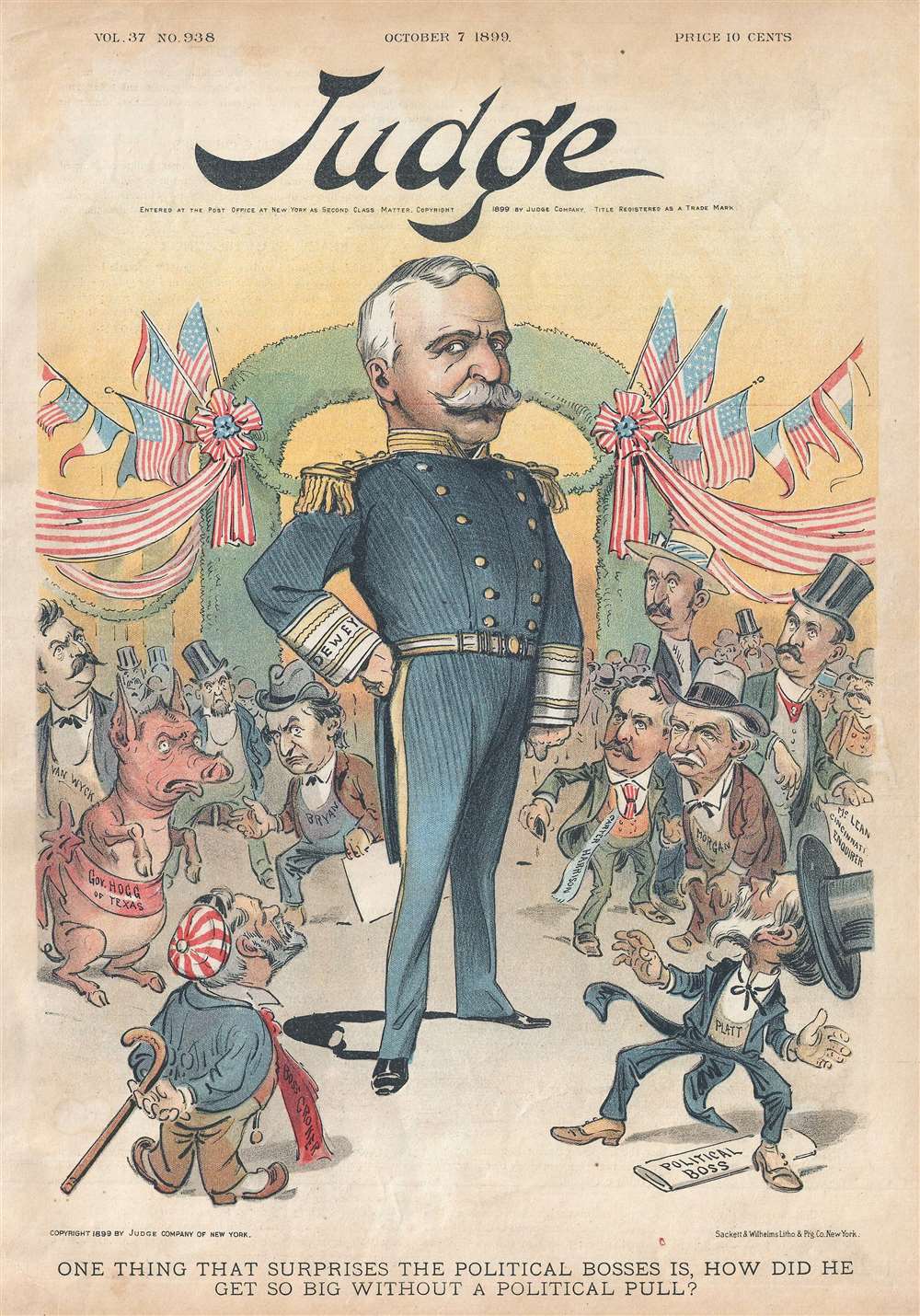 Dewey went from the victor of the Battle of Manila to being a front-runner for the Republican nomination for President.
$350.00

This is an 1899 Judge political cartoon marveling at the surprising political prominence of Admiral George Dewey in the early part of the presidential election cycle of 1900. The cartoon depicts a gigantic Dewey at the center of a party dressed in his Naval uniform surrounded by the most well-known political heavyweights of the day. William Jennings Bryan is present, as is Richard Welstead Crocker Sr. (November 24, 1843 - April 22, 1922), who was better known as 'Boss Croker' and was a leader of New York's notorious Tammany Hall. Thomas Collier Platt (July 15, 1833 - March 6, 1910) a two-term Congressman and the 'political boss' of the Republican Party in New York State is also included.

Dewey and the Election of 1900

Dewey is perhaps best known for his victory over the Spanish Navy in Manila Bay during the Spanish-American War. America had been gripped by a frenzied fascination with its new war hero, desiring as much information as the press could extract from a man who has gone down in history as incredibly shy and humble. Not given to self-congratulation, Dewey chose to forego a proposed cross-country tour by rail following his proposed arrival on the West Coast and instead chose to return to the United States via the Indian Ocean, the Mediterranean Sea, and the Atlantic, and arrive in New York City. Admiral Dewey did not understand the nationwide fascination with him and the Battle of Manila Bay because, from his perspective, it had not been a difficult battle. Nonetheless, when Dewey arrived in New York after his six-month journey, he was greeted as a conquering hero by New York Governor Theodore Roosevelt, other dignitaries, and a throng of admirers. A parade in his honor marched down Fifth Avenue four days later and was witnessed by a crowd of over one hundred thousand. Later that year, Dewey mounted a short-lived campaign for president that never truly materialized into a serious attempt. A series of political blunders that offended several different constituencies effectively sidelined his candidacy. Shortly after his failed run, however, he was named president of the newly-established General Board of the Navy Department, a position he held until his death.

This political cartoon was published by Judge on the cover of its October 7, 1899 edition.

Very good. Even overall toning. Text and cartoons on verso.
Looking for a high-resolution scan of this?