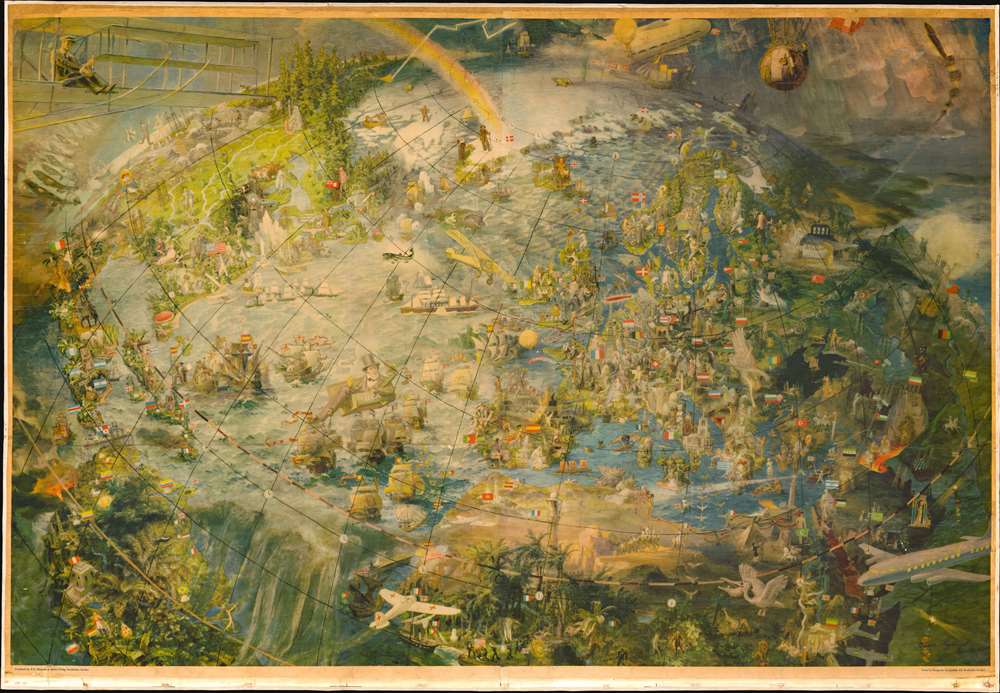 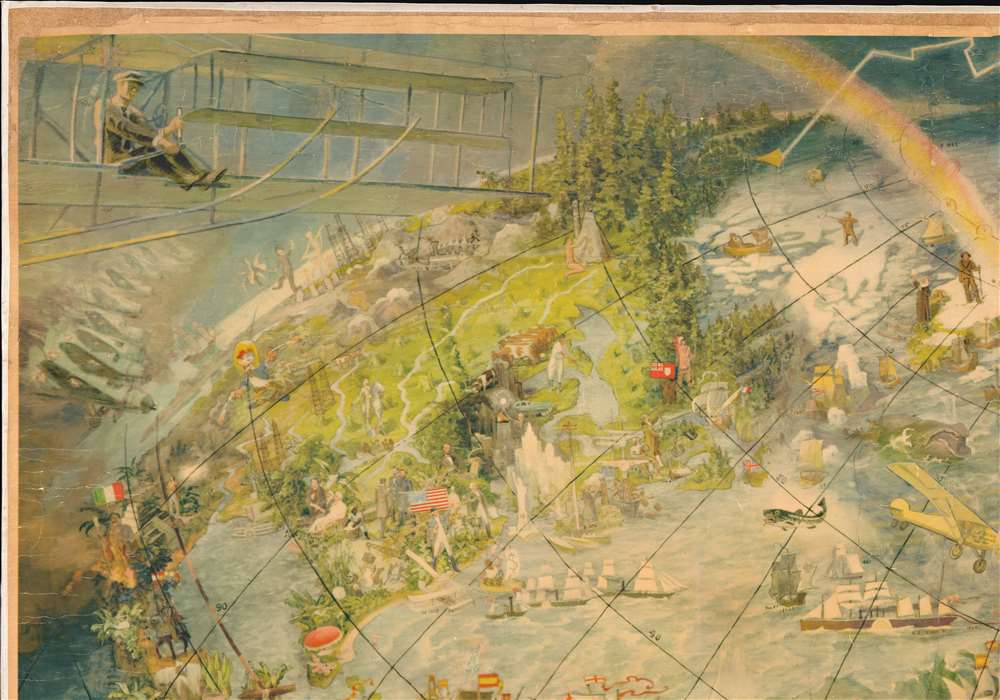 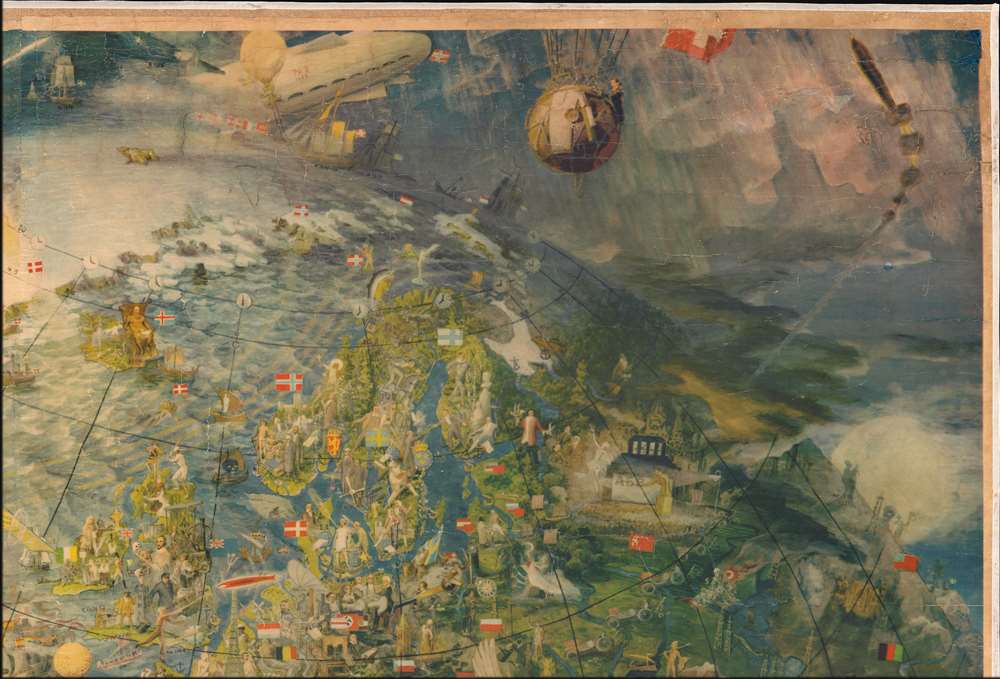 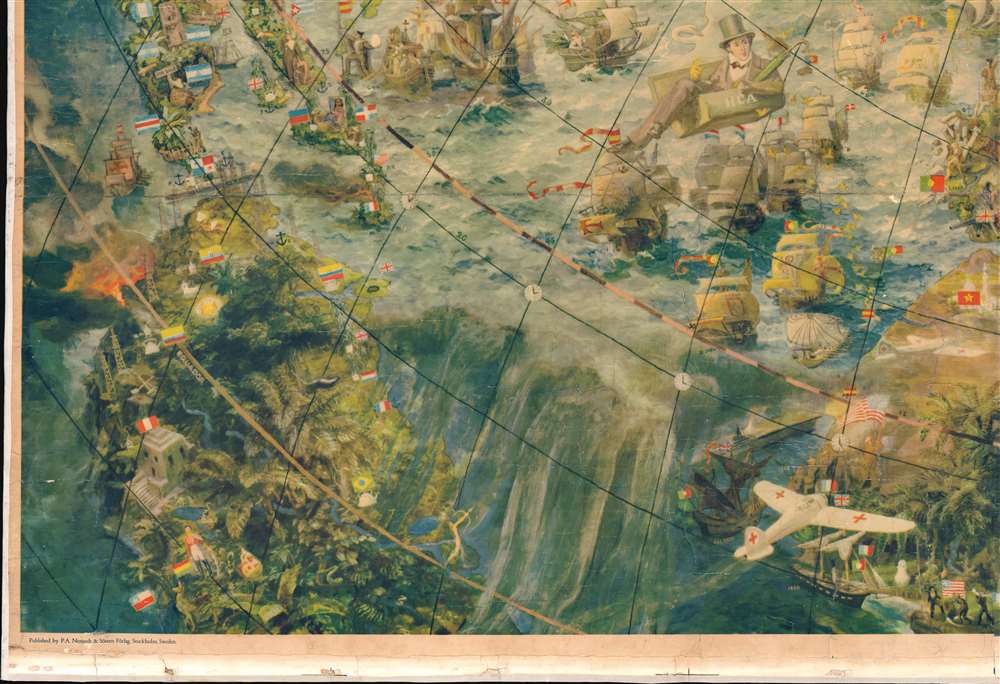 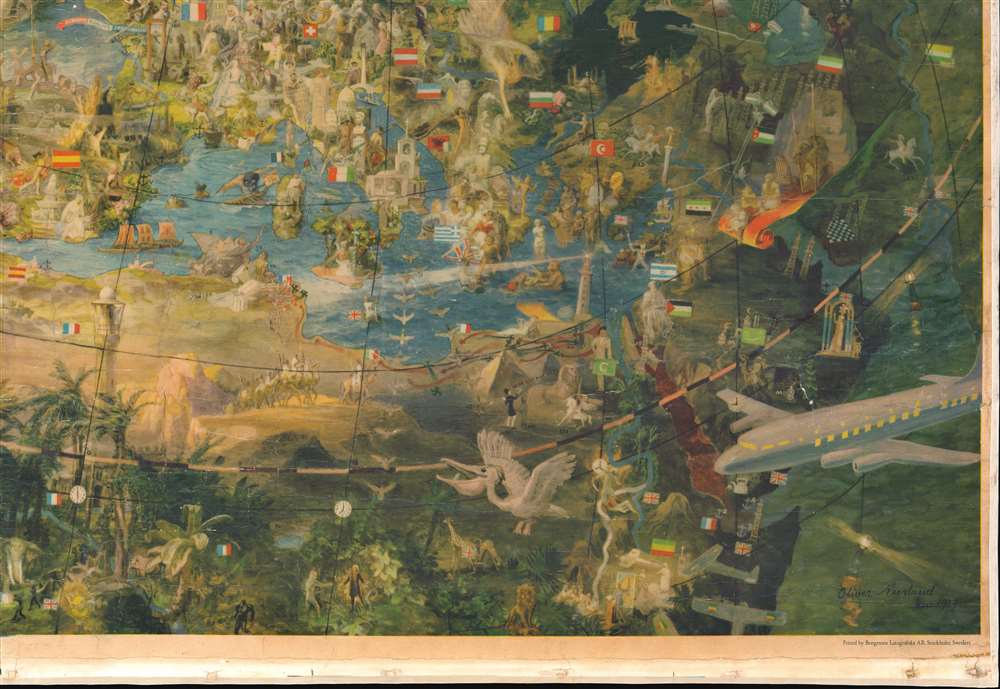 Optimism and danger in Post-WWII Europe and America.

This is an utterly stunning 1949 pictorial color lithograph wall map of the northern part of the western world by the Norwegian artist Oliver Neerland. The map covers all of North America, the North Atlantic, and Europe as far east as the Caspian Sea, as well as from the North Pole to the Amazon River and Liberia. Lavish illustration depicts historic figures, monuments, art and architecture, animals, airplanes, dirigibles, sailing ships of all types, aircraft adventurers, and more.

Neerland uses intense imagery to suggest optimism in a world emerging from the dark days of World War II. His political message is obvious. The United States is practically bathed in light, with verdant forests, cheerful cartoons, oil rigs, plentiful cattle, glowing cities, and noble founding fathers - the hope of the world. Soviet Russia, on the other hand, is shrouded in darkness, while a demonic Stalin lectures to the Russian people.

Most countries are represented by their national flags, including newcomers like Israel, founded one year earlier in 1948. Reflecting its liminal condition, Germany has four flags, East Germany, West Germany, and a mostly obscured Nazi ensign, and the flag of Allied Control Council, used during the occupation between 1945 and 1949.

This map is rare. We have identified no examples in institutional collections. On the market, we are aware of three appearances at Swedish auction houses in the last 15 years.

Oliver Neerland (March 5, 1881 - November 2, 1960) was a Norwegian painter, graphic designer, and theater designer. Neerland was born in Sandefjord, Vesgold, Sweden. He studied painting under the Norwegian artists Christian Krohg and Halfdan Strøm. In 1909 he enrolled in the Academy of Beaux Arts in Paris, later working as a theater artist in London. He was a set painter at the National theater from 1918 to 1934, then at the New Theater in Oslo from 1937 - 1939. Neerland became the set designer for the Edderkoppen Theatre in Oslo in 1942 and remained there until he retired in 1950. While most of Neerland's work focused on the theater, he did produce at least two large format pictorial maps, both illustrating the northern half of the globe in three-dimensional form centered on the Pacific. Learn More...


Per Adolf Norstedt (January 28, 1763 - September 20, 1840) was Swedish merchant and publisher based in Stockholm, Sweden. Per Adolf founded Norstedt in 1821 with the acquisition of the Lindhska Publishing concern. He brought his sons, Carl and Adolf, into the business in 1823, renaming it P. A. Norstedt och Söner. In 1833, the firm took over all publications for the Royal Family, becoming the de facto state publisher. When Carl and Adolf died, both without an heir, the company fell to Emilia Norstedt, a nice of Per Adolf, who brought her husband, Gustaf Philip Laurin (1808–1859), and three children, Gösta Laurin (1836–1879), Carl Laurin (1840–1917) and Albert Laurin (1842–1878), into the business. Carl, who was trained as a civil engineer, upgraded the printing processes with advanced lithographic presses and modernized the overall operations. Today Norstedt it is the oldest and one of the largest continuously active publishers in Sweden. Learn More...


Bengtsons Lithografiska (fl. c. 1949 - 1971) was a Swedish book publisher, printer, and color-lithography reprographics firm based in Stockholm during the post-WWII period. Learn More...

Good. Full professional restoration. Relined with fresh linen.
Looking for a high-resolution scan of this?