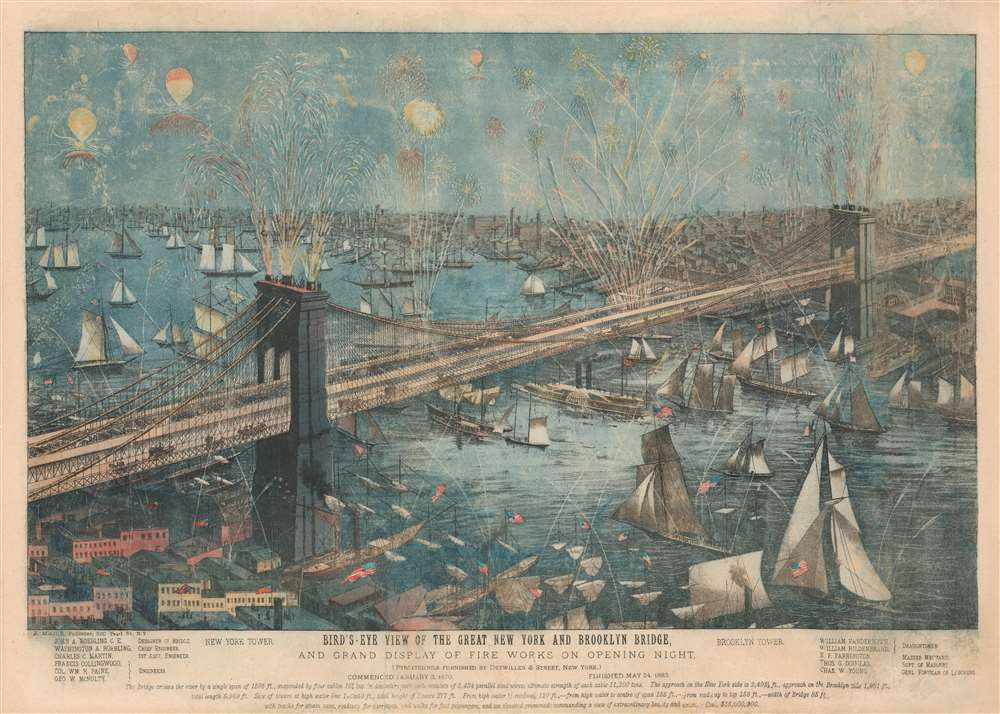 The most dynamic and dramatic Brooklyn Bridge View, this is the 1883 A. Major four-color chromolithograph bird's-eye view of the Brooklyn Bridge during its opening day celebrations. Then known as the 'New York and Brooklyn Bridge' or the 'East River Bridge' (it would not be officially renamed the Brooklyn Bridge until 1915), fireworks erupt from both stone towers and the center span. Individuals on rooftops and passengers set off additional celebratory fireworks. Steamers, sailboats, and three-masted schooners fill the East River, creating a visual spectacle emphasizing New York's significance as a port. Pedestrians cross the bridge, some in elegant carriages. The bridge's designer, engineers, draughtsmen, and other important individuals are recognized along the bottom border and a short text summarizes the bridge's specifications and its cost: $15,000,000.

This view was drawn by an unknown artist and published by A. Major in 1883. Examples are part of the collection at the Metropolitan Museum of Art, the Brooklyn Museum, and the Museum of the City of New York. It is not cataloged in OCLC. Exceedingly rare with no record on the private market.

Alfred Sarony Major (April 13, 1854 - July 23, 1829) was a New York City publisher, engraver, and lithographer. Major was born in New York, the son of Henry Broughman Major (1820 - 1887), of the lithography firm 'Sarony, Major, Knapp'. His middle name honors Napoleon Sarony (1821 - 1896), his father's business partner and a major pioneer in American lithography. Major learnt lithography under his father, Henry S. Major, at Major and Knapp. Major's early independent work is extremely obscure, being a singular view of the opening ceremonies of the Brooklyn Bridge issued in 1883. At the time, Major's offices were located at 330 Pearl Street, right next to the Manhattan entrance to the Bridge, in South Street Seaport, suggesting the location may have been a short-term marriage of convenience. Later he became a 'major' figure in publishing, the Vice-President of the American Banknote Company, one of the largest printers in the United States. In his later years, Major focused his attentions fully on engraving, becoming renowned as one of the finest banknote engravers in the world. Learn More...

Metropolitan Museum of Art 54.90.709. Brooklyn Museum X897.
Looking for a high-resolution scan of this?