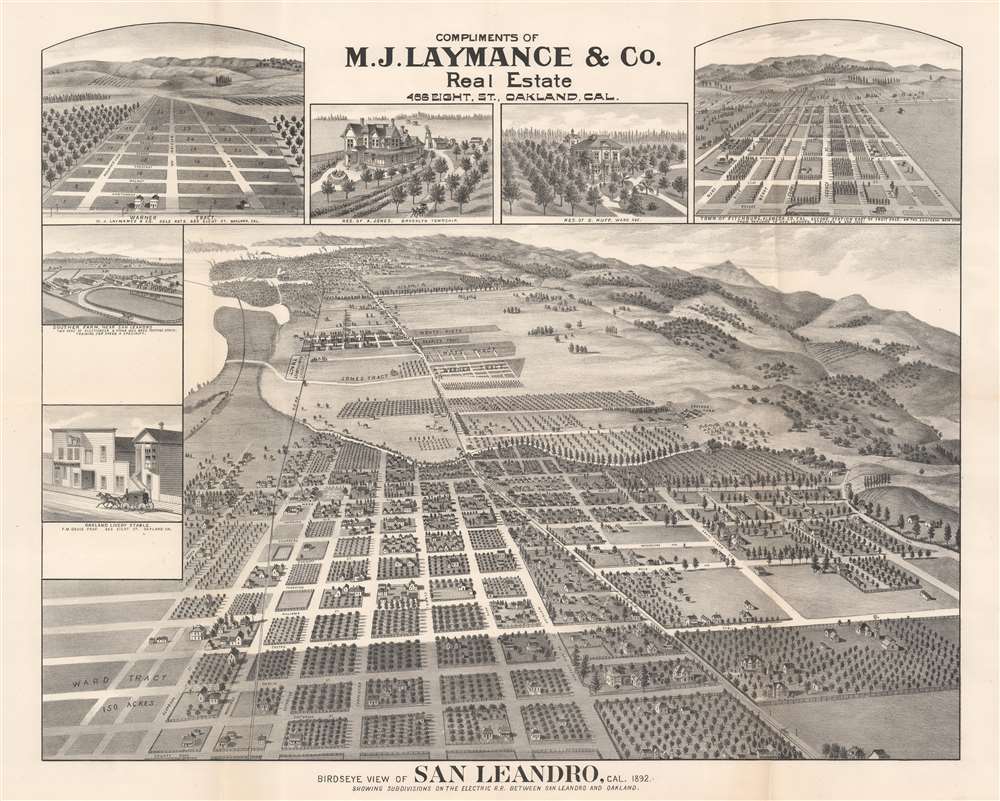 This is an 1892 broadside bird's-eye view of San Leandro, California, published by M. J. Laymance and Company. Issued the year of the 'Oakland, San Leandro, and Haywards Electric Railway' inauguration, the central view looks over San Leandro from the south. The Oakland, San Leandro, and Haywards Electric Railway line runs through the center of town and is labeled simply 'E.R.R.'. The Central Pacific Railroad's line also cuts through town, although farther to the left. Outside of town, specific tracts of land are identified by the owner's name. The South Pacific Coast Railroad appears along the coast of San Francisco Bay. Oakland, San Francisco, and the Golden Gate are all illustrated in the background.

Since this broadside was distributed compliments of M.J. Laymance and Company Real Estate, many of the vignettes surrounding the central view are associated with real estate. The two views just below the title focus on two private residences: the residence of A. Jones in Brooklyn Township and the residence of S. Huff on Ward Avenue. A view of Warner Tract appears to the left of the title and is already divided into lots for sale. The view to the right of the title depicts the town of Fitchburg in Alameda County. Two views along the left border illustrate Souther Farm and Oakland Livery Stable, respectively.

The Oakland, San Leandro, and Haywards Electric Railway began as a petition for authorization to build an electric railway between Oakland and Hayward. Filed on September 10, 1890, with the county board, the project was approved, and construction began in 1891 in Hayward. Built as a narrow-gauge railroad, it was completed within ten months and stretched for 14.3 miles from Hayward to 13th Avenue in Oakland. The company ordered six single truck electric cars from Carter Brothers Car Company in Newark. The first revenue run occurred on May 7, 1892, with five of the six cars and a fare of only seven cents. The railway was extended into downtown Oakland in early 1893 and its fleet of cars expanded. Mail service began soon after the extension was completed and in 1906 one of the railway's cars was partially converted into a U.S. Mail car. A second extension to San Lorenzo (which came to be known as the San Lorenzo line) opened on May 13, 1893. With this extension, the railway operated twenty miles of track, making it the longest operating electric railroad in the United States at the time. These electric rail lines helped drive development in the region, including the expansion of the Hayward city limits and the founding of several other small towns. The line was converted from narrow gauge to standard gauge in 1906 and merged with the Oakland Transit Company to become the Oakland Traction Company. Francis Marian 'Borax' Smith bought the line in 1908 and it eventually became part of the Key System after a series of mergers and acquisitions. The railway continued operating through the 1920s, although the Railway Post Office service ended in 1923 and the San Lorenzo line was abandoned in 1927. Service to Hayward ended on March 10, 1935. National City Lines, a company financed by oil and bus interests, acquired the Key System by 1946 and electric railway service ended on November 27, 1948.

This view was created for and published by M.J. Laymance and Company Real Estate in 1892. This is the only known surviving example.