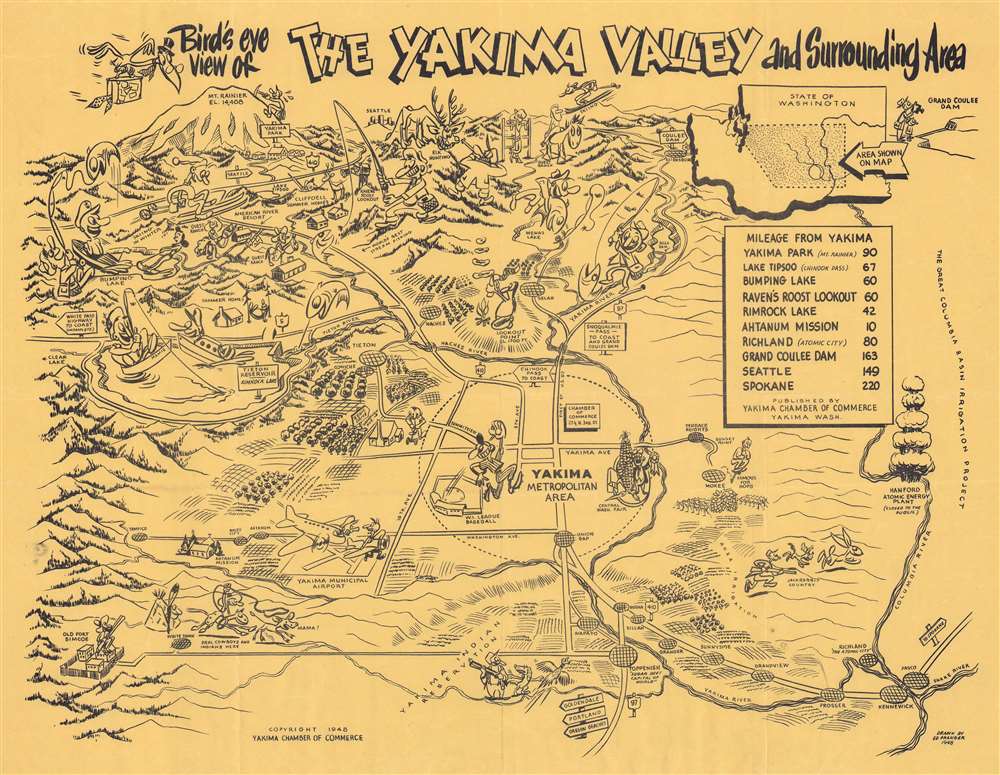 This is a 1948 Ed Pranger bird's-eye view cartoon map of the Yakima Valley, Washington. Yakima appears in the foreground encircled by a dashed line. Yakima's baseball stadium and the Central Washington Fair (marked by a man holding an ear of corn significantly taller than himself) appear in the vicinity. Outside Yakima, Pranger highlights hops grown near Moxee (emphasized by a man on a pogo stick). Comic illustrations of fishermen, boaters, and skiers emphasize the Yakima Valley as an exceptional destination for outdoor adventure. A ferocious elk stands with a hunter near the title, while Mt. Rainier looms above all. Grand Coulee Dam occupies the upper right, and Seattle appears along the horizon. A mileage chart provides distances from Yakima to places in Washington State and an inset offers geographical context.

This map was drawn by Edward Pranger and published by the Yakima Chamber of Commerce in 1948. This is the only known cataloged example.

Edward Herman Pranger (June 28, 1912 - February 7, 2012), known as Ed, was an American artist, illustrator, and cartoonist active in the middle part of the 20th century. Pranger was born in Hillsboro, Oregon. As a young man he proved a talented artist, selling his cartoons and other drawings to the local newspaper for fifty cents each. His family moved to Yakima, Washington, to work at the canneries when he was a young man. Ed himself took work as a sign painter, illustrating trucks, buildings, and billboards. He also took a correspondence course with the Famous Artists Schools - his only art training. He purchased the sign shop with a friend, Carl Fenner, when the original owner retired. After the outbreak of WWII, Ed joined the Navy in 1942, spending four years at the training center in San Diego where he was employed by the Recruit Training Command as an artist and cartoonist. There he published artwork in The Hoist, a U.S. Navy internal newspaper published from 1923 to 1994, and Wing Tips. After the war, Ed returned to Yakima, Washington, and re-opened the Fenner and Pranger sign shop, branching out into drawing advertising for early television. In 1956, he moved to Los Gatos, California, where he opened a commercial art and silk screen business based in San Jose. He and his wife, Mary Talbot Helliesen, moved back to Washington in 1980, settling in Anacortes. During his long retirement, Pranger painted more than 250 acrylics, many of which were sold at the local Marine Supply Hardware. His work was once described as 'Grandma Moses meets the Far Side'. Pranger died in Anacortes, Washington, at the age of 99 1/2. Learn More...