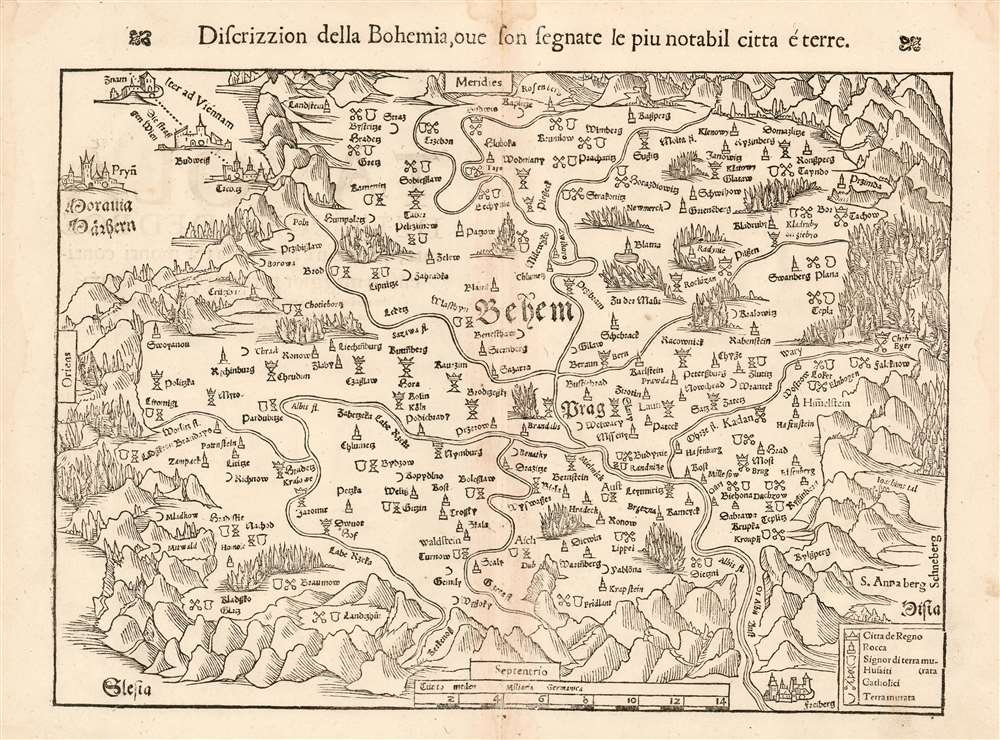 This is Munster's 1545 map of Bohemia, the earliest acquirable printed map of what is now the Czech Republic. The map appeared in an Italian edition of Munster’s Cosmographia Universalis, a work notable for presenting to a broad lay audience many of the first printed maps to rely on recent surveys and toponymy, rather than data from classical sources. Munster’s source for this map was Nicolaus Claudianus’ 1518 map of Bohemia, which now exists in only one known copy. Munster's map is the only version of Claudianus' map available to the collector.

First Map to use a Key

This map is the first known to use a key with symbols on a map to reflect the political, religious and economic terrain of the region depicted; Nordenskiold called this 'the first map on which the different religious and political conditions of a country are denoted.' With the key, Royal cities, landed nobility, castles and market towns are easily distinguished from each other. Also, each town's religious affiliation is marked with either keys (signifying Roman Catholic) or a stylized chalice (representing The Unity of Czech Brethren, a Hussite protestant sect to which Claudianus belonged.) Bohemia's long and contentious reformation history would have made this feature on the Claudianus map one of singular importance. None of these remarkable details were lost on Munster, who retained all of them on his version of the map

North at the Bottom

The map’s southern orientation, while unusual to modern eyes, would not have been confusing to the 16th century reader. Maps produced in and around Germany in the first part of the sixteenth century, travelers’ maps in particular, were designed to be read with the assistance of solar compasses. These devices orient their users (in the northern hemisphere) toward the south; consequently, this and many of Munster’s other maps based on modern survey share a southern orientation. Indeed, the original 1518 Claudianus is itself oriented to the south.

This map was introduced in the 1545, Latin edition of Geographia Universalis; it remained in that work and was included in Cosmographia Universalis, until 1578 when the double-page maps of the long-lived work were replaced and updated. This state of the map corresponds to all three Italian editions of the Cosmographia (1558, 1571 and 1575). The verso texts of all three are identically typeset, and the maps of all three are of the same 1558 state across the board; it is therefore probable that the maps of all three editions were in fact printed at the same time in 1558 and that the later editions were bound from the original 1558 printed stock. This individual map is only catalogued once in OCLC in its 1545 German-text edition, and not at all in the Italian. The Italian editions of Cosmographia are noted in fifteen institutional collections.


Mikuláš Klaudyán (Lat. Nicolas Claudianus, died 1522) was a Bohemian physician and scholar, sometime publisher, and member of the Czech or Bohemian Brethren, a Protestant group formed in 1457 rooted in the teachings of Jan Hus. He printed the oldest map of Bohemia in 1518, hailed by Nordenskjold as 'the first map on which the different religious and political conditions of a country are denoted.' Learn More...

Munster, S. Cosmographia. (Basel, Petri) 1558     The Cosmographia Universalis, one of the greatest geographical and historical works of the 16th century, 'taught nearly three generations of laymen most of what they knew about the world beyond their native places' (Strauss). Filled with maps, views, and rich descriptions of places throughout Europe and beyond, it was the best general source of geographical information until the advent of Ortelius' Theatrum. It was first issued by Sebastian Munster (1488 - 1552) in its 1544 German edition, and stayed in print long after its author's death in thirty five editions, and in five languages. (Of these, the 1550 and 1552 editions are widely regarded as the most complete and truest to the author's intentions: thereafter, later editors continued to add to the work's text; editions from 1588 onwards employed an entirely different set of maps produced on Ortelius' model.) Munster's goal, initially, was to rally his homeland's humanists and scholars to produce a new map of Germany in order to 'see what kind of a land our ancestors conquered for their home... bring honor to our country and place its beauties in the clear light of day.' Munster's project quickly expanded to cover the known world in its scope to produce a 'sufficiently large volume, in which I touch upon the foundation of all nations and kingdoms, their peculiarities, rivers, mountains, customs of men, royal successions, origins of the more important cities, succinct histories, religions, characteristics and fertility of lands... in Germany, however, I tarry a little longer.'.

Very good condition. Some toning along the centerfold and upper margin.

OCLC 21787094 (German 1545 edition). Nordenskiold, Facsimile Atlas, p.25. McLean, Matthew The Cosmographia of Sebastian Munster: Describing the World in the Reformation (Ashgate, 2007). Ruland, Harold L. 'A Survey of the Double-page Maps in Thirty-Five Editions of the Comographia (sic) Universalis 1544-1628 of Sebastian Munster and in his Editions of Ptolemy's Geographia 1540-1552' in Imago Mundi XVI 1962
Looking for a high-resolution scan of this?