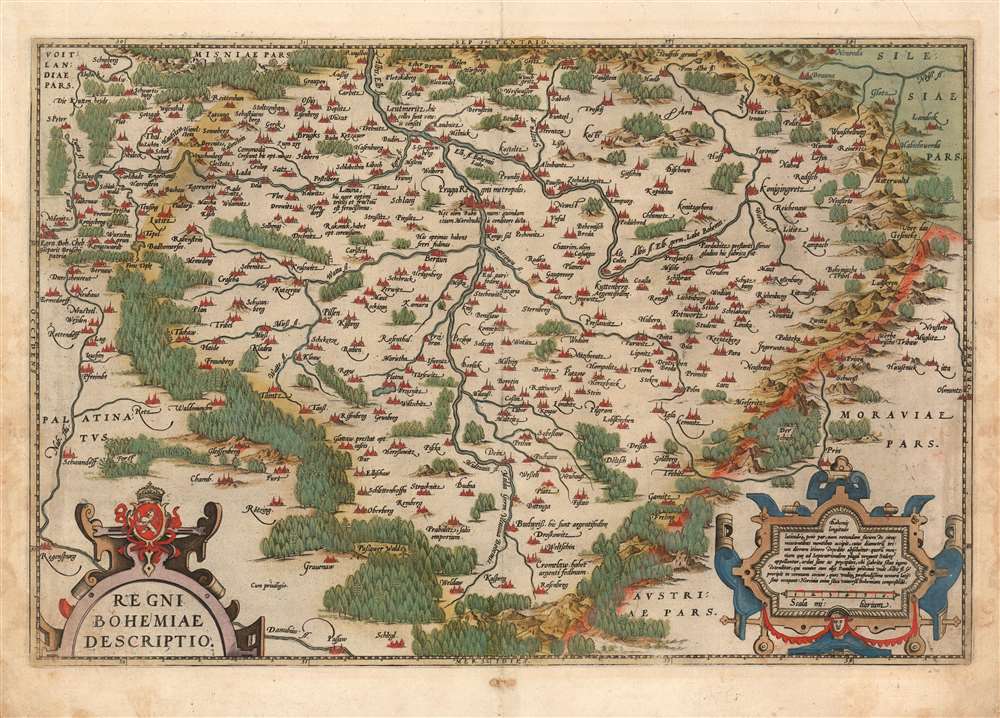 This is Ortelius' 1570 map of Bohemia, in a beautiful, original-color example from the 1587 French edition of Theatrum Orbis Terrarum, the first modern atlas. It is derived from the unobtainable, Leipzig-published, 1568 Johann Criginger (1521 - 1571) map, which was to date the best map of Bohemia available. Like the Criginger, Ortelius' map is oriented to the north, showing the Kingdom of Bohemia surrounded by pictorially-represented forests and forbidding mountains. Cities and towns are pictorially shown to represent their respective sizes. Ortelius' map is embellished with two handsome, strapwork cartouches; the title cartouche is surmounted with the Bohemian coat-of-arms.

The map was produced for inclusion in Ortelius' Theatrum Orbis Terrarum, appearing in the work through its entire run from 1570 to 1641. Based on the verso text, this example corresponds to the 1587 French edition of Ortelius' atlas. Van den Broecke identifies two states to this work, the second of which appears 'from 1592 onwards (or possibly earlier)' based primarily on changes in cartouche hachure. Scrutiny of this and other examples suggest that plate wear and frequent minute retouching conspire to produce a greater variety of states than has been recorded, though none of the changes appear to be more than cosmetic might be considered 'pointless minutiae'. Van den Broecke estimates that approximately 8225 copies of this map were printed; as a rule of thumb perhaps one of ten survive. Consequently, the map is well represented in institutional collections and appears on the market with some regularity, albeit with wild variations in condition and quality.


Johann Criginger (1521 - December 27, 1571) was a German Lutheran pastor, writer and cartographer. He was a student at the University of Wittenburg, transferring later to the University of Leipzig and in 1541 to the University of Tübingen. He became a teacher in Crimmitschau, but then returned to Wittenberg, whence he graduated in 1544. 1547 found him as court preacher of Count Lorenz Schlick in Žlutice. By 1548 he was a clergyman in Marienberg, where he became archdeacon in 1551. In 1559 he became a pastor in the Church of the Virgin Mary, holding that position until his death. Not only a churchman, Criginger was also a cartographer. He is most remembered for his 1568 Bohemiae regni nova chorographica Descriptio, which provided the source for Abraham Ortelius' Regni Bohemia Descriptio. (Criginger's map now exists only in two known copies. Learn More...

Ortelius, A., Theatrum Orbis Terrarum, (Antwerp: Ortelius) 1587.     Abraham Ortelius' magnum opus, Theatrum Orbis Terrarum, was the world's first regularly produced atlas, which 'set the standards for later atlases . . . It was the first undertaking of its kind to reduce the best available maps to an uniform format.' (Koeman) A modestly-sized work of fifty-three maps in its first edition of May 1570, it was an immediate success: there were three further editions that year, and the work remained in print for a total of 32 editions, the last of which was 1641, well after its author's 1598 death. Ortelius added to his atlas constantly, and by 1595 the Theatrum contained 147 maps. Ortelius is renowned generally as an editor, and indeed much of the Theatrum is compiled from a variety of sources: in such cases, Ortelius was scrupulous in naming his sources. But Ortelius was also a mapmaker in his own right: many of his maps are a distillation of various sources into his own work, and there were many maps - particularly in his atlas of Biblical and ancient history Parergon - which were entirely Ortelius' work. In his role as an editor, Ortelius followed in the footsteps of Munster, whose Cosmographia was, until Ortelius, the best window on the world for the curious European reader. In terms of the artistry of his maps, Ortelius oversaw the first great flourishing of copperplate engraving in the service of cartography to occur in Northern Europe. Ortelius' work provided the model for the atlases of Mercator, Hondius, Blaeu and all their progeny in the 17th century - many of whom were to produce faithful editions of Ortelius' maps in their own productions.