1729 Homann Map of the coastal Borderland of Norway and Sweden 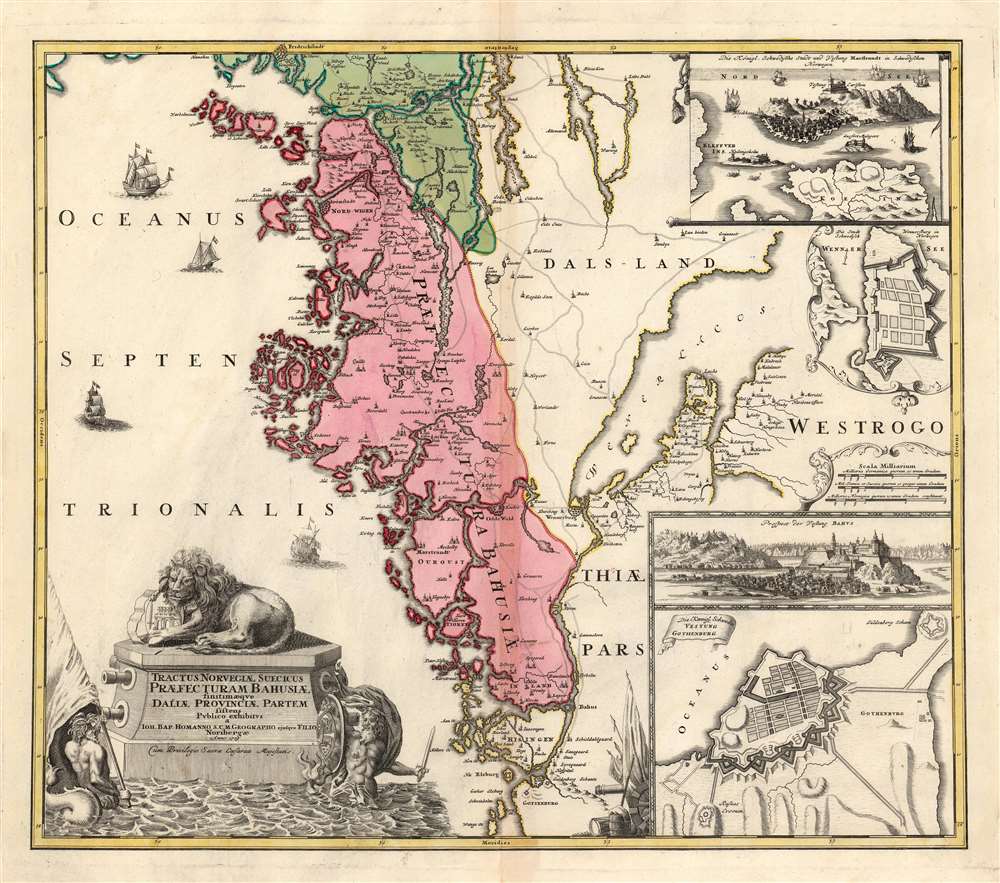 1729 Homann Map of the coastal Borderland of Norway and Sweden

This is a detailed and elegant map, engraved in 1729 by Johann Christoph Homann, of the Swedish province of Bohuslän, and parts of Dalsand and of Västergötland on the coastal border of Sweden and Norway. After Sanson's comparatively rudimentary Gouvernement de Bahus of 1668, this is the first map to focus on this region in detail.

The map covers the North Sea coast from Gothenburg to the Norwegian fortress city of Fridrichstadt. There are two inset views - the fortified island of Marstrant, and the castle of Bahus. (The latter derived from a 1697 view by Samuel von Pufendorf.) Additionally, two inset plans detail the fortifications at Gothenburg and Wennersburg. A martial cartouche presents a stylized fortress in the water, flanked by armed mermen. One, brandishing a sword, carries a shield emblazoned with the Swedish arms. Surmounting the cartouche, a lion (representing Sweden) rests possessively atop the arms of Bohuslän, characterizing Sweden's attitude towards this borderland with Norway. (Bohuslän had been Norwegian territory until the 1658 treaty of Roskilde, in which Denmark and Norway were forced to cede the county and Skåneland to Sweden following the Second Northern War.) The map clearly evokes the provinces island-strewn coast yet understates the approximately three thousand islands that make up the Gothenburg archipelago. In the eastern part of the map, between Dalsand and of Västergötland, is Lake Vänern, the largest in Europe.

This map may have been engraved by the elder Homann, but it was completed and published in 1729 by his son Johann Christoph for inclusion in the Homann atlases. We see only a single state of this map, of which perhaps twenty are cataloged in institutional collections.