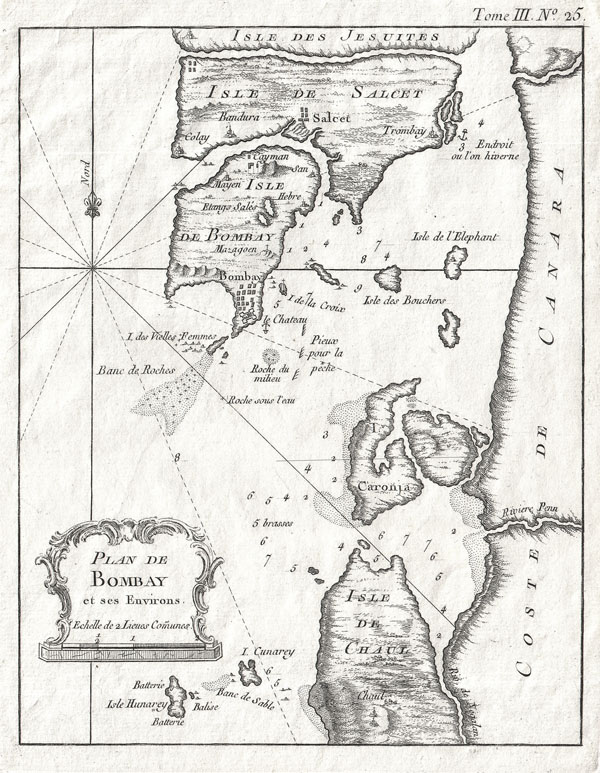 An extremely attractive and rare 1764 map of Bombay or Mumbai, India by J. N. Bellin. Depicted the peninsula of Bombay as it was in the 1700s – divided into several small islands including Salcet, Bombay, and the Isle of the Jesuits. Shows the city and fort of Bombay at the southern tip of Bombay Island. Also shows the villages of Salcet, Cayman, Mayen, Colay, Bandura and Trombay. Includes the coast of mainland India from the Negalan River northward past the River Penn to what is today Panvel Creek. Offers considerable offshore detail including depth soundings around Bombay Harbor and references to shoals and anchorage. Decorative title cartouche in the baroque style in the lower left quadrant. Prepared by J. N . Bellin for issued as Map no. 25 in vole III of the 1864 issue of Le Petit Atlas Maritime.

Bellin, J. N., Le Petit Atlas Maritime, vol. 3, (Paris) 1764.     Bellin's Petit Atlas Maritime was a five volume atlas of all parts of the world published in Paris in 1764. The atlas is a combination of fresh material and previous issued Bellin maps. The breakdown of volumes is as follows: Volume I: North America and the Caribbean (102 Maps), Volume II: South America (89 maps), Volume III: Asia and Africa (127 maps), Volume IV: Europe (130 maps), and Volume V: France (132 maps), for a total of 580 maps and plans. This important atlas marked a major transition in European nautical mapping. It's significance is most accentuated by comparison to Bellin's other great atlas, L’Hydrographie Française, a large format work much akin to Dutch nautical atlases of the previous century. The Petit Atlas Maritime, on the other hand, was issued in a more compact format that allow for a diverse wealth of individual maps. Stylistically, it had more in common with European road atlases than with other nautical atlases of the period. As the largest collection of plans of harbors and nautical maps available at the time of publication, the Petite Atlas Maritime work proved popular with navigators and armchair adventurers alike. Its universal appeal gave rise to new convention in maritime mapping. The atlas was sponsored by the Duc de Choiseul. J. Arrivet is listed as engraver on the chart index pages, but there is a great likelihood he also engraved the maps and plans.

Gole, S., Early Maps of India, 46.
Looking for a high-resolution scan of this?