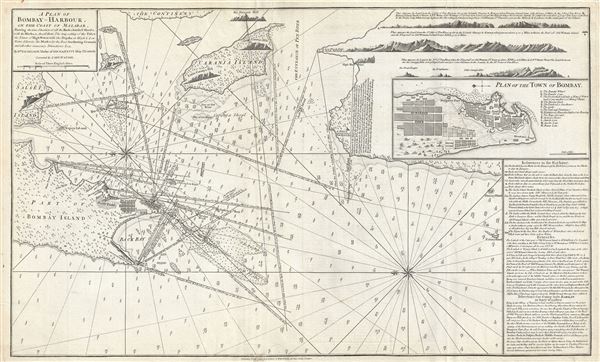 The largest and most detailed map of Bombay (Mumbai) to appear in the 18th century.

This is a fine example of Laurie and Whittle's 1794 nautical chart or maritime map of Bombay (Mumbai) Island, city, and harbor, India. The map covers from Salsette Island to the continent south to Hunary Island. There is a detailed plan of the city of Bombay as well as several coastal profile views in the upper right quadrant. This is arguably the largest and finest nautical chart of Bombay Harbor to appear in the 18th century.

Laurie, R., and Whittle, J., The East-India Pilot, or Oriental Navigator, on One Hundred and Eighteen Plates: Containing a Complete Collection of Charts and Plans, &c., &c. for the Navigation not only of the Indian and China Seas, but of those also between England and the Cape of Good-Hope; Improved and Chiefly Composed from the Last Work of M. D'Apres de Mannevillette; with Considerable Additions, from Private Manuscripts of the Dutch, and from Draughts and Actual Surveys Communicated By Officers of the East-India Company A New Edition, Containing One Hundred and Five Charts. (London: Laurie and Whittle) 1794.

National Library of Australia, 3666030.
Looking for a high-resolution scan of this?