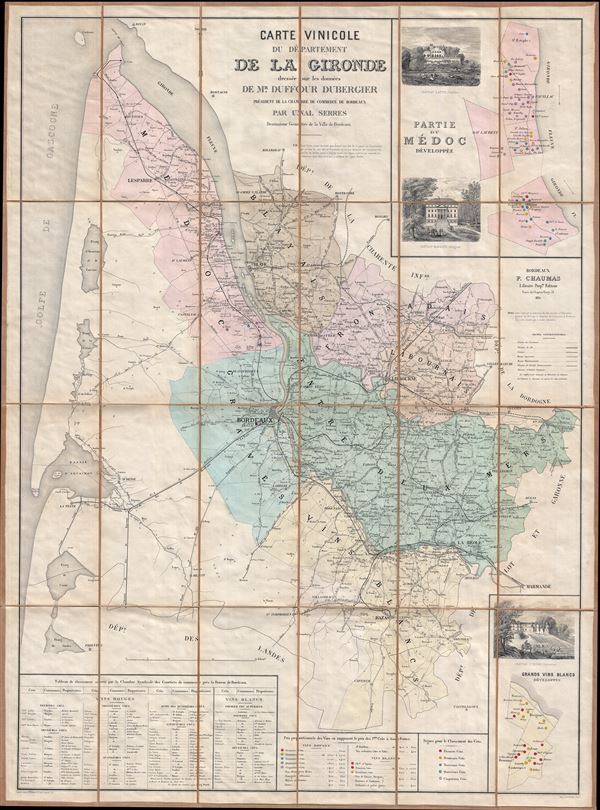 The only true antique wine map we have seen.

This wonderful 1874 map of the Department of the Gironde, France, is the only true antique wine map we have ever seen. It depicts the Gironde on a grand scale with color coding according to wine region and type. This coastal department is the seat of the Bordeaux wine region and produces many of the world's finest reds. Most maps of the Gironde reference the region's rich winemaking tradition, but this map actually highlights important vineyards and wine regions as well as offering significant supplemental data regarding the types of wine produce, 'Crus' status, vines, etc. Some of the most important vineyards including Chateau d'Yquem, Chateau-Margaux, and Chateau Lafite, are specifically illustrated with vignettes. There are several insets highlighting the most illustrious parts of Medoc and the Sauterne region. Tables in the lower quadrants identify various wines by type, region, and grape.

Cartography this map was prepared by Unal Serres. The viticulture data was compiled by Sadi Duffour-Dubergier. It was engraved by L. Wehrer and printed by Lemercier. The map was published by P. Chaumas. There are several editions, although all are very scarce, from about 1855. This map is a must for the collection of any serious wine and map lover.

Lodi-Martin Duffour-Dubergier (fl. c. 1842 - c. 1902) was the Mayor of Bordeaux and president of the Chamber of Commerce of Bordeaux in the second half of the 19th century. Like many men of Bordeaux, he was a well-known wine enthusiast. Today there is a street named after him in the city of Bordeaux. Duffour-Dubergier was also the owner of Chateu Smith-Haut Lafitte, one of the region's oldest vineyards, from about 1842 to 1902. Learn More...