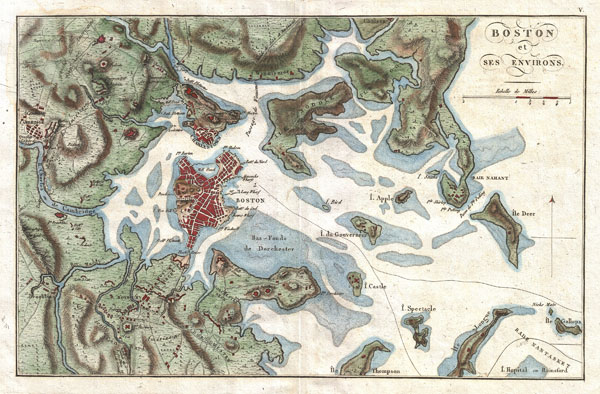 A beautiful 1807 map of Boston and its immediate vicinity drawn by J. N. Buache for inclusion in the 1807 French edition of Marshall's Life of Washington. Covers the Boston area from Brookline and Cambridge to the Atlantic. Shows the sites of various battles including Bunker Hill. Identifies the road to Lexington, various batteries, Hancock's Warf, Long Warf, Rowes Warf, and the Block House. Includes some undersea features particularly the shoals that would later be filled in to form Dorchester and East Boston.

The French, having just passed through their own bloody revolution and embroiled in the Napoleonic Wars, felt a sense of brotherhood with the fledging Unites States. Recognizing an rising interest in France for information about the American Revolutionary War, the Paris publisher Imprimeur-Libraire issued a French language edition of Marshall's authoritative Life of Washington. The French publishing industry, being far more advanced than American publishers of the period, demanded a higher quality production. The Imprimeur-Libraire hired the engraver J. N. Buache to re-engrave the original Faden maps with French titles. The result is a beautifully produced example of this map on thick laid paper rendered with a particularly strong and crisp impression. A fine map and a must for any serious Boston collection.

Jean-Nicolas Buache de La Neuville (1741 - 1825) was a French Hydrographer and Geographer active in the late 18th and early 19th centuries. He is a nephew of the well known theoretical cartographer Phillip Buache. Like Phillip and De L'Isle, with whom his was also related, J. N. Buache held the position of Premier Geographe du Roi. J. N. Buache was an ardent supporter of his uncle, Phillip Buache's, radical cartographic ideas regarding the speculated existence of a "northwest passage". Like Phillip, Jean Nicholas believed that theoretical cartography, that is, applying geographical theories could fill in the blank places on the globe before actual explorers traveled there. While this approach did yield occasional minor success, it is the spectacular misjudgments, such as speculation on the Northwest Passage, for which it is best known. Nonetheless, Jean Nicholas had a distinguished career as a well respected cartographer both in France and abroad. He published a large corpus of maps in addition to various theoretical treatises on cartography and geography. Learn More...