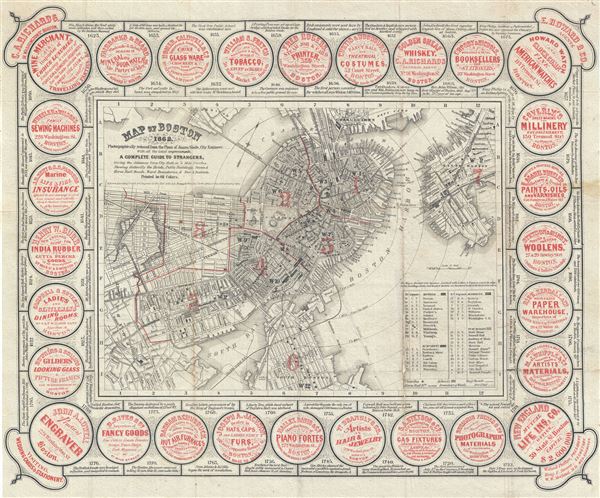 This is a charming 1862 map or plan of the city of Boston, Massachusetts, by the famous Boston lithographer Louis Prang. Covering the entire city of Boston, Prang's meticulously detailed map illustrates streets, piers, parks, bridges, buildings, railways, wards, as well as radial distances from City Hall. An index of hotels, markets, public buildings and railroad depots is included in the lower right quadrant.

Perhaps the most unusual and charming feature of this map is its border, which includes 28 beautifully engraved trade advertisements, and important events in the history of Boston dating from 1623 to 1860. These include advertisements for wine merchants, engravers, fancy goods, furs, booksellers, glass ware, etc. Some of the important events listed along the timeline include 'The first free Public School was established here, 1635,' 'The first person executed for witchcraft was Widow A. Hibbins, 1656,' '1722, Only 3 trees were on the Common, the big Elm and 2 in front of Parks St. Church,' 'A great earthquake, the only one of note, destroyed 1500 houses in Boston, 1755,' 'The Tea was destroyed by a party disguised as Indians at E. Pool Wf., 1773,' 'The first two railroads, the Providence and the Wochester were opened this year, 1835,' etc.

This map was issued as a pocket map entitled Map of Boston: A Complete Guide to Strangers and is dated and copyrighted 'Entered according to Act of Congress in the year 1862, by L. Prang and Co. in the Clerks Office of the District of Mass.'