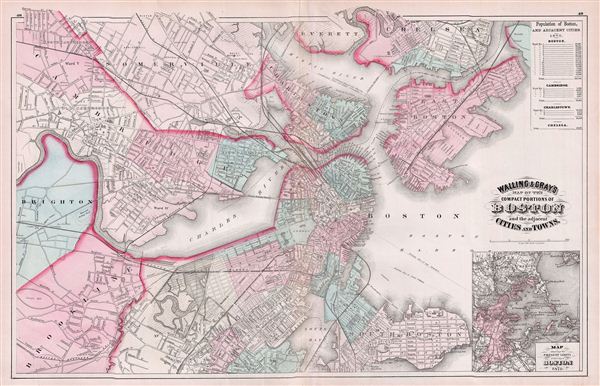 A fine 1871 map of Boston, Massachusetts, published by Ormando Gray based upon the cartographic work of Henry S. Walling. The map covers central Boston as well as the adjacent cities and suburbs of South Boston, Brookline, east Boston, Charlestown, Cambridge, Brighton, everett and Chelsea. Proposed landfills in the Back Bay region are ghosted in – a particularly interesting element as in the 1871, this massive urban restructuring project was still a work in progress. In Cambridge the grounds of Harvard University are noted. A larger map of the environs of Boston appears on the lower right quadrant. The upper right quadrant features population statistic for Boston, Charleston, Cambridge and Chelsea according to the 1870 census. Published by the Philadelphia firm of Stedman, Brown & Lyon for publication in the 1871 edition of Walling & Gray's Topographical Atlas of Massachusetts.